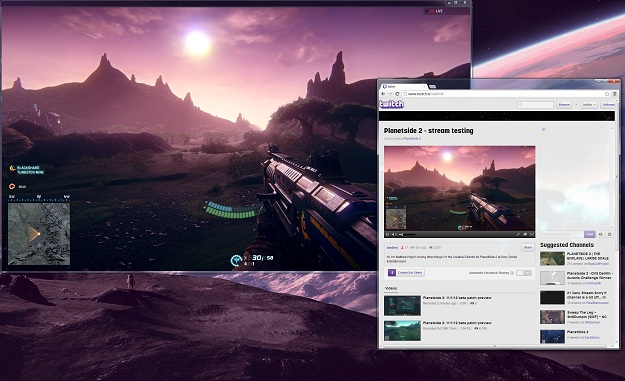 With PlanetSide 2, Sony Online Entertainment hopes to drop players into a massive, chaotic warzone populated with other, like-minded virtual killers in an intense race to see who will be the last one standing. Given that premise, it should come as no surprise that simply watching the chaos unfold would have a certain entertainment value, even for people who aren’t playing the game.

Whether or not that proves true, Sony Online Entertainment has announced an agreement with gaming-centric video streaming site Twitch (formerly TwitchTV) to add a new button to the game’s user interface that would instantly allow players to stream their in-game exploits. According to SOE this makes PlanetSide 2 the “first game in market to enable direct one-click streaming to the Twitch platform.” Further, the company claims that it’s currently ” in discussions with other top developers/publishers regarding similar integrations.”

Those that have been following Twitch since back at its days as part of Justin.tv, shouldn’t be surprised by the news. Many see the rise of eSports as one of the next big gaming trends of the coming years, and the rapid success of Twitch is testament to that. One of the most significant problems with the expansion of the medium though, has been the technology needed to stream games. On PCs there are a few options, but console streaming requires specific equipment that most gamers don’t have, and probably aren’t willing to purchase at this time. As Twitch expands and more companies follow SOE in including streaming options, that should change rapidly.

As for solid, important details, here’s what you need to know: First, this new button will supposedly be updated into the game at some point this weekend. SOE says “sometime between Friday and Monday,” so adjust your schedules accordingly. Secondly, SOE warns that while this new feature will be up and running in the next few days, it may not be entirely functional. The company claims that the button will be visible to everyone in the PlanetSide 2 beta, but that it “will probably not be fully functional until the actual game launch.” Which, for the record, is scheduled for November 20.

A secret Super Punch-Out!! multiplayer mode has been discovered

5 JRPGs not from Square Enix deserve the HD-2D treatment