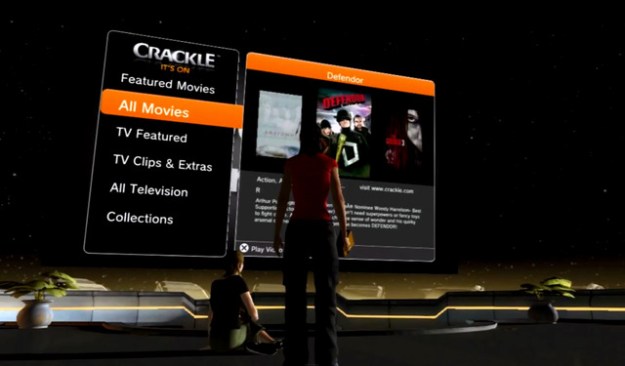 While Sony rolled out a sizable revision to PlayStation Home approximately three weeks ago, the social gaming environment has been expanded today to include virtual movie watching with friends. Pretty much identical to the concept of party viewing on the Xbox 360, the update to PlayStation Home allows PlayStation 3 owners to bring up movies served through the Sony Pictures Entertainment-owned Crackle and play the films within the virtual environment. Opposite from services like Netflix, Hulu Plus and Vudu on the PS3, there is no charge to watch movies through Crackle’s service.

After creating an avatar within PlayStation Home, the user navigates the avatar to the Sunset Yacht, Hollywood Hills or LOOT EOD theater. Specifically at those locations, the user can bring up a Crackle menu designed for the PlayStation 3 controller and stream a film. The user can also invite up to eleven friends to join the streaming event and share comments while watching the movie. Feature movies include Step Brothers, Starship Troopers, Resident Evil, Snatch, Ultraviolet, Cruel Intentions, Desperado and Rudy. Crackle’s television library includes older shows such as Seinfeld, Married with Children and Newsradio. Crackle also has a variety of Anime shows in addition to original programming.

Sony has plans to expand this concept of social sharing to live events and music within the PlayStation Home environment. Sony is utilizing Ustream for  live events and plans to allow broadcasts of this content in both public and private LOOT spaces. In regards to social music sharing, Sony is implementing RadioIO to create a new LOOT item called Entertainment On Demand Active Radio and allow users to listen to music channels, both in private and public spaces. Radio channels include genres such as classical, jazz, country, rock, pop,  hip hop, R & B, electronic and dance.

PlayStation Sports Pack offers MLB 14: The Show on PS3, with NBA 2K14 for half price