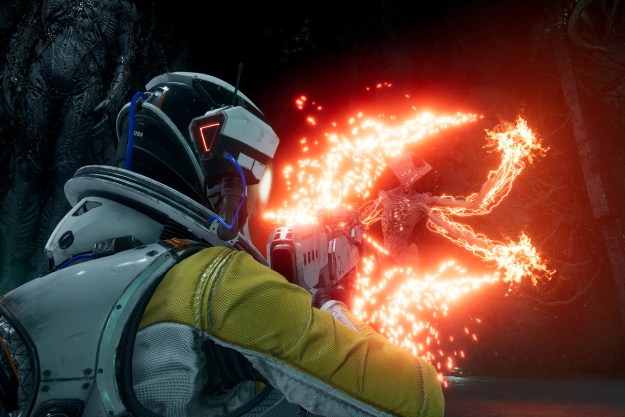 “Returnal takes full advantage of the PS5's features to give players a fast and furious sci-fi spectacle.”

Returnal finally closes the gap between AAA and indie video games. While those worlds have often felt disconnected from one another, the new third-person shooter is proof that they can naturally meld together. Its DNA is just as rooted in indie gems like Dead Cells as it is in big-budget sci-fi shooters like Mass Effect.

The PS5 exclusive comes from Housemarque, a Finnish studio known for niche titles like Super Stardust and Nex Machina that draw influence from arcade shooters. The studio announced it was changing direction in response to lackluster sales, famously declaring “arcade is dead.” Fans feared that the pivot could squash what made the studio special, but it turns out that Housemarque’s version of a AAA game only amplifies its indie spirit.

Returnal is a bold sci-fi shooter that successfully breaks down the gaming industry’s long-standing genre barriers. While its punishing roguelite elements can get in the way of its narrative strengths, fast-paced combat and an enthralling atmosphere make it one of the more exciting top-tier PlayStation exclusives to emerge in quite some time.

Describing how Returnal works is no easy task. It may look like a standard third-person shooter, but that barely scratches the surface. It’s also a roguelite, a bullet hell game, and a Metroidvania adventure rolled into one (that’s a lot to process, I know). That hodgepodge of influences may sound like a “too many cooks” situation, but Housemarque is a master chef when it comes to genre fusion. Each flavor is perfectly balanced.

The basic premise is that players control an astronaut named Selene who’s found herself in a sci-fi version of Groundhog Day after her ship crash-lands on the planet Atropos. She must shoot and slash their way across six distinct biomes while picking up new perks, weapons, and upgrades along the way. When she dies, she’s sent right back to her ship with most of her gear removed.

Luckily, players don’t exactly start from scratch. There are clever progression hooks baked in. Beat a biome’s massive boss and the path to the next area will remain unlocked for the next playthrough. There are permanent skills that can be collected as well, like a grappling hook or metal leg attachments that allow players to walk on lava. That little bit of Metroid-style gear gating continually opens up secrets across the world and makes it fun to explore the randomly assembled map each time.

Everything is glued together by fast-paced action. The movement itself is satisfyingly quick, allowing for an evasive ballet as giant space squids lob orbs in every direction. The guns are a blast to fire thanks to perks that permanently unlock over time and make each weapon type feel distinct. Guns use a short cooldown system instead of limited ammo, so players are encouraged to go wild in encounters. There’s also a powerful melee sword slash, which offers a solid incentive to charge headfirst into battle. It’s an aggressive action game where it’s always fun to simply execute the basics.

There’s a lot more complexity to speak of, like an adrenaline system that grants stat boosts every time players get three kills in a row without being hit. All those little systems come together to form an experience that always has its foot on the gas. It’s easy to see where Housemarque’s arcade roots come into play here. Returnal feels like a top-down shoot-em-up reimagined as a big-budget 3D action game. The studio may claim that “arcade is dead,” but it’s alive and well in these high-octane battles.

Tonally, Returnal’s closest comparison is to director Ridley Scott’s films. The game has Scott’s same signature brand of ominous science fiction, not unlike Alien or Prometheus. Selene’s story is at once otherworldly and deeply personal. Ominous narrative sequences set inside Selene’s home, which mysteriously appears on Atropos, slowly build out her troubled history before it crescendos to a gripping emotional conclusion.

Without giving too much away, it’s a harrowing story that justifies the game’s cyclical roguelite setup. There’s something inescapable eating away at Selene that’s causing her to relive her past over and over. The journey isn’t so much about shooting every enemy in sight as it is uncovering a deeply repressed memory.

Much of the game’s haunting tone is achieved through Atropos itself, which is an ominous planet laced with danger. From a sprawling desert full of mechanical squids to an icy tundra that’s nearly devoid of organic life, Selene is truly cut off from society. It’s a lonely experience that invokes the uneasy isolation of games like Metroid Prime.

Returnal makes the most compelling case for the PS5’s tech we’ve seen yet.

Housemarque has gone to great lengths to immerse players in this setting. As a PS5 exclusive, Returnal takes full advantage of the DualSense controller to make Atropos feel more tactile. The haptic feedback simulates soft raindrops and slimy parasitic squirming. The controller’s built-in speaker drops some helpful sound cues as well, like a sharp squelch that indicates a weapon’s alt-fire has recharged.

Returnal makes the most compelling case for the PS5’s tech we’ve seen yet. While exclusives like Destruction AllStars reduced the Dualsense to a gimmick, Returnal shows how thoughtful details can help create an all-encompassing interactive experience to make a fictional planet feel real.

Returnal’s difficulty is sure to be a point of discussion. Like many roguelites, it’s a merciless and at times unforgiving video game. There are no additional difficulty levels or accessibility options to ease the experience for players. That can be extremely frustrating considering the compelling story it tells. Anyone who’s just in it for the narrative, but can’t keep up with the demanding action, is simply out of luck.

The problem here isn’t so much that the game is “too hard,” though that’s surely the broad criticism likely to surround it. Instead, it’s that Returnal doesn’t offer enough versatility when it comes to what constitutes a winning strategy.

Like other roguelites, each run is about constructing a successful build by making constant micro-decisions. The game gives players a consistent stream of risk-reward choices to make, whether through malignant items that can cause a temporary suit malfunction or parasites that grant one great perk on top of a debuff. These do an especially great job at changing the feel of each run and encouraging players to experiment with potentially risky side effects for high reward.

But sadly, it feels like there aren’t many recipes for success. Every single “good” run I had involved a defense buff and some form of suit repair that would heal me at low integrity. The runs where I had that could go on for hours and take me through multiple areas with ease. The ones where I didn’t were often inevitably doomed. Since items like artifacts appear at random, I often spent runs saving up my currency until I could find the right one. It also doesn’t help that players can only hold one gun at a time, reducing the potential to create a toolset that can tackle different situations.

Returnal doesn’t offer enough versatility when it comes to what constitutes a winning strategy.

Part of the problem is that failed runs don’t necessarily feel worth the effort. Barely anything of use carries over from run to run, and it can take hours to scour an area to get the power needed to tackle the next one. Stepping into a new biome after a long scavenging process only to be shredded in the first encounter is a deflating experience. It makes the runs that result in progress feel that much sweeter, but there’s an imbalance between success and failure.

It doesn’t feel as though players will be trading notes with one another about their eclectic winning builds. It’s more likely they share their misery and relief like they would in a Dark Souls game. Those conversations may create a barrier for entry that paves over Retunal’s complex action and engrossing story, which deserve to be the center of attention.

Returnal is a winning combination of big-budget production value and creative, genre-spanning gameplay that’s usually reserved for cult indie hits. It tells a haunting sci-fi story that thematically justifies its cyclical, roguelite setup. Demanding action combined with a lack of viable build options turn too many runs into frustrating nonstarters, but a compelling mystery and fast-paced action always provide a strong reason to die and try again.

Hades is still the best roguelite out there, and there’s no shortage of great, high-budget space shooters, but Returnal is the best of both worlds for the most part.

That depends on skill due to its roguelite nature. Some players might clear the game in 15 hours. Others might take 40. Expect to land somewhere in between, with some daily challenges and post-game exploration to extend its life span.

Yes. For PS5 owners, it’s the best exclusive to hit the console since it launched and may remain unchallenged on that front until Horizon Forbidden West.

Topics
One of the PS5’s best exclusives will finally launch on PC next month
The best PS5 controllers for 2023
The best PS5 games for 2023
All cross-platform games (PS5, Xbox Series X, PS4, Xbox One, Switch, PC)
How to cheat in Words With Friends
Shoulders of Giants brings mascot-era nostalgia to the roguelite genre
The best PSVR games for 2023
Like a Dragon: Ishin’s Trooper Cards are full of cameos, including Rahul Kohli
How to romance characters in Fire Emblem Engage
How to eliminate enemies with no ranged weapons in Fortnite
Fire Emblem Engage gift guide: every character’s favorite gifts
Call of Duty: Warzone 2.0 Season 2 will finally fix its looting system
The best capture cards for 2023: Xbox, PlayStation, and PC