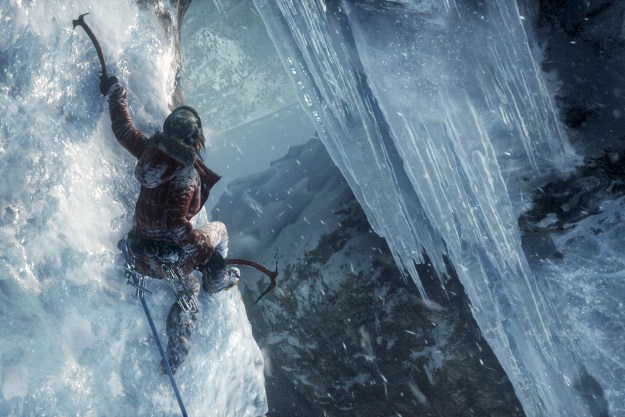 “Rise of the Tomb Raider is the best blockbuster game of 2015.”

The 2012 reboot of the Tomb Raider franchise was one of the best things to happen to a game series in a long time, even if at times the new version of Tomb Raider wasn’t quite what the old one had been.

While Tomb Raider fell down on elements like challenging puzzles and a dearth of actual tombs to raid, it succeeded in humanizing one of gaming’s great misused protagonists. For her entire existence, Lara Croft had trouble not being viewed as a 12-year-old boy’s polygonal fantasy object first, and a badass archaeologist second. In Tomb Raider, she finally became a real character, with the game’s full focus on her personality and humanity.

Rise of the Tomb Raider returns to that Lara and that world, and like its predecessor, it does many things very well. Lara Croft has gone beyond being just a relatable, fascinating and well-rounded protagonist to becoming one of the best lead characters triple-A gaming has seen in a long time. And Rise of the Tomb Raider excels in one department above all others: it is a quintessential blockbuster, well-paced, overwrought and intense in all the right ways. The fun and excitement Rise of the Tomb Raider expertly delivers make it easy to overlook its faults.

Time to Do Some Archaeology

This isn’t quite the post-traumatic stress disorder story Rise of the Tomb Raider’s early marketing would have had players believe. Lara’s moved on from her experiences on Yamatai, the weird supernatural island where she had to shoot a lot of bad men in the head and several of her friends were killed. Now she’s converted what feelings of survivor’s guilt might have been at play into an obsession with proving right her father’s apparently harebrained archaeological theories.

The late Lord Croft became captivated with “The Prophet of Constantinople,” a Byzantine man with supposedly Christ-like abilities who was persecuted by a sect of the Christian faith. According to the legends, the Prophet had an artifact called the Divine Source that could grant immortality. Lord Croft was laughed out of the field for his theories, and even Lara was frustrated by his obsession. Then Lord Croft died, and Lara became a damn good archaeologist herself, and now she’s on the hunt to finally prove her father wasn’t a nut.

Of course, regular archaeology quickly turns to ridiculous action, as a group of religious zealots with an army’s worth of military ordinance is in pursuit of Lara. This is the modern incarnation of the organization who, during the Byzantine Empire, killed the Prophet, but they never found the Divine Source. Luckily for them, Lara’s leading them right to it.

Rise understands it’s not just that Lara is a badass, but that she’s at her most interesting when she’s nerding out.

Like its predecessor, Rise of the Tomb Raider mixes together open-world elements with environmental puzzles and third-person shooting, and probably the best thing about the game is how often it gets those ratios right. Navigating the world and discovering what’s in it is first and foremost what Rise is all about, and you’ll spend most of the experience not shooting it out with random soldiers, but trying to reach a cliffside cave entrance, or working out how to open the way into a burial chamber. Much of the game is about climbing puzzles, and by the end you’ll have no shortage of gear for hammering into weak walls and ice, swinging over gaps, and even creating climbable handholds where none previously existed.

There are also many more tombs this time out, although most of them are optional “challenge tombs” that you’ll have to seek out as you run around some of the larger, explorable “open world”-like regions of the game. They’re all worth it, sporting a range of cool locales like an abandoned Soviet uranium mine and a wrecked and frozen Byzantine ship, and packed with smart puzzles that are just involved enough to keep the pace. The main plot might have you rushing along, but the side tombs are some of the best things Rise of the Tomb Raider has to offer.

The game sports an engaging script from writer Rhianna Pratchett that manages to take action movie clichés and spin them into strong characters, both heroes and villains. And chief among them is Lara, voiced again by Camilla Luddington, who carries the game and is reason enough to work all the way through it.

Lara is a rare video game protagonist. She manages to come off as human and real even as she achieves feats of climbing and combat that would make her a superhero in any other universe, and the world’s top athlete and soldier in our own. Brilliantly, Lara never cracks wise or responds to other characters with sarcasm: instead, she’s earnest and driven, and you buy that it’s her sheer force of will that lets her make the jump to the icy cliff and save her own life with the well-placed point of an ice axe, or that she barrels into a group of soldiers with a bow and kills them all in single-minded defense of her friends. When soldiers shout, “Here she comes,” and Lara replies, “You’re damn right I’m coming for you,” you believe in her fearlessness — when she screams, “Oh shit!” as ancient ruins crumble under her feet, you believe in her fear, too.

For most of the game, Lara is alone, but she manages to carry the game along with internal monologue and insightful asides. Rise of the Tomb Raider is littered with collectibles, and it’d be a lot more annoying running around and picking them all up it not for the fact that they are often a chance for Lara to use her archaeological expertise. As she picks through relics or translates murals, you’re her sidekick, waiting to see what she’s uncovered. Rise understands and utilizes what makes chief inspirations like the Indiana Jones films work: it’s not just that Lara is a badass, it’s that she’s at her most interesting when she’s nerding out.

The main plot might have you rushing along, but the side tombs are some of the best things Rise of the Tomb Raider has to offer.

The strength of Lara’s character carries the game through many of its missteps. As a sequel to Tomb Raider, Rise feels much more like a retread of old ground. Once again, you have to hunt animals to “survive” but really it’s to craft new gear; you have to unlock what feels like the same set of progression abilities the first game contained; and you’ll stack up an absolutely ridiculous body count of enemy soldiers. For all the realism and emotional depth Rise of the Tomb Raider brings Lara and other characters, it undercuts much of it with what feels like a fear that without enough “video game things” — like thousands of enemies to kill and a truckload of collectibles to find — players won’t hang around.

A Promising Future in the Field

Not that those elements should be dismissed out of hand, because in terms of being a blockbuster, Rise of the Tomb Raider sets a new bar. It’s brimming with spectacular set pieces, every single one of which is phenomenal; in fact, they’re only weakened by the sheer ridiculous number of them as they’re all lined up one after the other in the main plot. A battle through an old Soviet supply depot that kicks off a small fire and turns into a raging inferno, for example, is one of the best game sequences I’ve played all year. Carefully stealthing through an enemy camp can be a blast, and while there’s a lot of combat, it’s paced out so well that it never feels like Rise of the Tomb Raider is turning into a Gears of War-like shooting gallery.

Rise of the Tomb Raider’s biggest issue is that the bar set by its predecessor is incredibly high, and it can’t quite match it. Rise doesn’t quite seem to know where to go next, so instead it returns to where it found success with Tomb Raider. That’s not all bad: the game’s combat is fun and fast, its mechanics like climbing are involved enough that they avoid becoming stale, and graphically, Rise of the Tomb Raider is straight-up gorgeous. But in comparison to Tomb Raider, Rise is more of the same but with some of the kinks ironed out.

Those kinks include Tomb Raider’s competitive multiplayer mode, which always felt out of place in the original, and which is replaced here with “Expeditions,” an arcade-style mode that has you replaying portions of the game with an angle of going for speed or increased challenge. Expeditions lets you try to outscore your online friends by completing specific objectives in each level you replay, and you can activate unlockable “cards” that do things like strip you of your ability to heal, or blow up all the enemies’ heads like balloons. The mode is a fun reason to go back through some of the best moments of Rise and changes up the experience, but seems unlikely to hold most players’ attention unless they have friends who’ll bring some healthy competition.

Rise of the Tomb Raider Xbox One console bundle ($399)

Rise of the Tomb Raider is the best triple-A blockbuster of 2015, because even though it has its share of flaws, the things it does well far outpace the things it does poorly. It’s a popcorn flick of a game in the best sense of the analogy, with an abundance of spectacle that’s elevated by a cast of characters with a lot of humanity.

It’s true that in some ways Rise feels like more extension than true sequel, and there are still places developer Crystal Dynamics needs to find its footing, like in balancing the requirements of a game against pacing and story, or mixing Tomb Raider’s open-world elements with puzzles that carry more challenge and depth. However, the game is ultimately a better whole than any of its individual parts. It perfectly encapsulates the big-budget gaming experience, and as such, it’s a beautiful, exciting blast from start to finish.