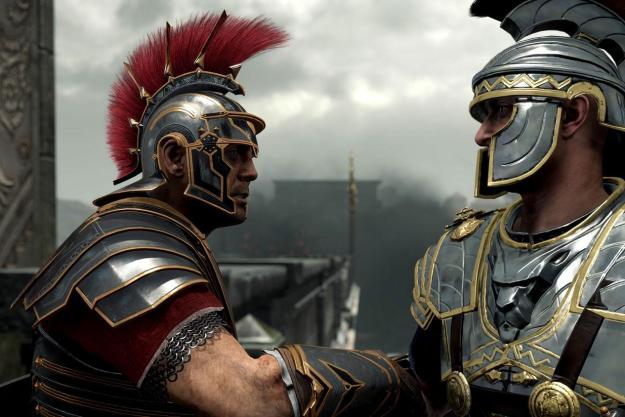 “Ryse: Son of Rome rises above its rote hack-and-slash design with a handful of inventive ideas and a killer story.”

Ryse: Son of Rome is a first step. That’s what it feels like, at least. Crytek’s Microsoft-published Xbox One launch title is exactly what it needs to be: simple, straightforward, and pretty. The sort of diversion that anyone, from gaming newcomer to joystick-twirling veteran, can spend a few hours with and end up with a sense of what their new toy can do. What it’s not is forgettable. This is a game whose story gets its hooks in. It feels like Microsoft Studios’ bid for an Uncharted/God of War-like saga, even if it’s not quite on the level of those two favorites.

You know what though? It’s off to a solid start.

Marius Titus is a Roman warrior during the time of Emperor Nero’s reign. The story opens – like any good Roman epic should – on a massive battle, the defense of Rome against the united tribes of Britannia. Titus guides Nero into the safety of the palace, keeping his emperor distracted from the danger with a story from his own past. A story involving a family cut down by foreign assassins, and one faithful Roman citizen’s lifelong pursuit of vengeance.

Marius Titus would willingly sacrifice all to save his emperor from the invaders, and through his story we learn why.

The events of Ryse: Son of Rome – a work of historical fiction, to be clear – unfold primarily as a flashback, with each chapter charting Titus’ journey from legionary to general to heroic savior. Cutscenes between each chunk of his life bring us back to the present day, with Titus and Nero hunkered down in a candlelit chamber, far from the noise of the battle raging outside.

The flashback is a necessary contrivance for this particular tale – the eventual climax makes that clear – and it’s effective without being intrusive. You don’t suddenly hear Titus start monologuing in the middle of the playable action. There’s a very traditional structure of cutscene-chapter-cutscene-chapter in Ryse, and it serves this story well. Each chunk of gameplay reveals vital facts about Titus that serve to elevate your understanding of what’s actually going on in the present-day setting.

As the pieces fall into place and the bigger picture becomes clear, you start to question the assumptions that the game presents you with at the start. It’s not difficult to see where the story is going and how things might twist… to an extent. There are some surprises as well, bits of the picture that relate less to Titus and more to the notion that Ryse is Crytek’s first brick in a planned franchise.

The developer wields the Xbox One very well in building Ryse‘s eye candy-saturated spectacle. From storming Britannia’s beaches to a gruesome runthrough of Rome’s famed Colosseum (no, it hadn’t been built during Nero’s reign; don’t be a jerk), there’s an epic sense of scale that the visuals capture perfectly. All of it held together by that extra layer of next-gen shine, a play of light and shadow that simply wasn’t possible with older hardware.

The play is standard-issue hack-and-slash by way of the Batman: Arkham games. Your light/strong attacks are complemented by a counter move that leaves an enemy open to follow-up strikes. There are plain, old grunts that you can slash to pieces, shield-bearers whose guard must be shoved aside with a strong attack, dual-wielders that dodge until you counter them, and heavies that take lots of punishment and can’t be staggered. Whether you realize it or not, you’ve probably played this game before.

The play is standard-issue hack-and-slash by way of the Batman: Arkham games.

The success, then, is in the execution … and executions, which we’ll get to in a moment. Titus moves fluidly across the screen, naturally weaving one attack into the next. Attacks land and leave enemies looking physically battered, with bloody gashes opening up in the wake of a swinging blade. You’re never challenged, even at higher difficulties; always just a Roman badass doing Roman badass things. It gets to be a little tedious by the time you hit that final hour, but the story and the twist that executions offer keep the tedium at bay.

Weaken an enemy enough and an icon appears over his head, signaling that you’re clear to finish the aggressor with an execution. Hit the right trigger to launch into a brief, randomly selected (and occasionally contextual) quick-time event that sees Titus brutally maiming his opponent before sending him off into the great beyond. Your enemy glows a light blue or yellow to signify which button needs pressing; it’s much more pleasing to the eye than a chunky button icon. It’s also a horrifically gorgeous display of violence in a way that only video games can manage.

There’s good reason to keep coming back for more QTEs, in the form of four interchangeable boosts that are applied with each successful execution. The only pickups in Ryse are collectibles; restoring health and focus (a meter that manages a limited-use time slowing ability) depends entirely on executions. Each direction on the D-pad equips a different boost: health gain, focus gain, XP boost, and damage boost. You can only equip one at a time, and you earn that boost with each successful execution. There’s no failing these QTEs – the execution plays out no matter which button press – but hitting the right button at the right time brings a bigger reward.

Sadly, almost all of this gameplay presents itself in Ryse‘s opening hour, and there’s little to mix things up beyond that. Titus earns experience that can be spent on a variety of skill upgrades and unlockable executions, but it’s more in the realm of improved stats (health, damage, etc.) than it is gameplay-changing tactical options. It should also be noted that a built-in micropayment scheme allows you to buy in-game currency that can be spent on skills, though there’s never any need to do so. Most will easily max out every skill through the natural course of play.

You’ll occasionally man turrets or chuck Roman spears at distant enemies. Sometimes you’ll form troops up into a protective phalanx as you turtle toward an entrenched position. There’s even a handful of moments that allow you to decide how troops position themselves for a coming battle, though this is no more complex than choosing between, for example, defending right versus defending left. The choice you make tweaks different variables; so defending one side may cut off enemy archer support, but it also allows more ground troops in to harass you.

The dearth of options is really the big knock against Ryse. There’s nothing innovative or “next-gen” about a straightforward hack-and-slasher. This one is admittedly a beautiful showcase of the Xbox One’s technical capabilities, but the moment-to-moment play is familiar and relatively unchanging over the course of 6-8 hours. And to be fair: it’s familiar gameplay that also happens to be a lot of fun. It’s not the killer app though.

Online gamers can also participate in a two-player co-op multiplayer mode set in Rome’s Colosseum. It’s an occasionally objective-driven survival mode, but with the twist of each “map” – really just the floor of the Colosseum reorganizing itself – running through a battle from Rome’s past. Sometimes you’re just fighting, but you’re also called on, randomly, to destroy catapults with burning oil, free prisoners, and capture/hold specific locations. All the while, an off-screen narrator chronicles the exploits of your heroic Roman legionaries.

This gladiatorial multiplayer mode has its own character progression that falls closer to Diablo than to Titus’ leveling in the campaign. You’re able to buy bronze, silver, and gold “booster packs” with money earned (or purchased via microtransactions). Each pack comes with a random assortment of weapons and gear – all with some stat increase or another – that you assign to helmet, armor, weapon, shield, etc. slots. There are five tiers of booster packs that unlock as you level up, which limits the usefulness of spending real-world money to boost your character. You can buy powerful gear with real money, but you can’t get the best Tier 5 stuff until you put in the time to level up.

In practice, the long-term progression in Ryse‘s multiplayer doesn’t necessarily line up with the amount of content available to play with. Yes, there’s a whole Season Pass worth of content incoming, and yes, the mode itself is entertaining enough as a co-op multiplayer diversion, but it’s hard to see large numbers of people investing significant amounts of time here. The play is just too simple, too repetitive. There’s some added variety in choosing which god to follow before each match, which in turn determines your special attack and execution boost, but it’s still not enough.

It feels like Crytek has more elaborate plans in the wings for Ryse. The game that’s here is simple-yet-entertaining, a brief adventure that showcases the visual power of your new Xbox One. The story ends on a definitive note, but a handful of threads are left dangling, teasing a bigger picture that we only get a taste of from Titus’ journey. There may not be much innovation in this rote hack-and-slash gorefest, but Ryse: Son of Rome is a perfectly serviceable Xbox One launch title that may yet grow beyond its meager beginnings.

This game was reviewed on an Xbox One using a copy provided by Microsoft.