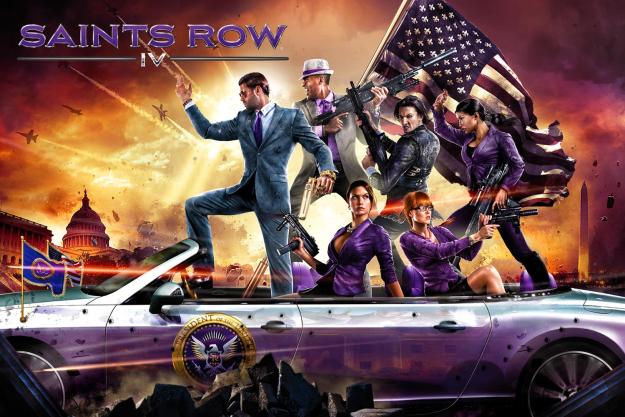 ““Saint’s Row IV is an important game, because it ignores convention in order to be insanely fun – emphasis on the “insane”””

While wandering the digital streets of Steelport with my trusty hentai-tentacle bat, just after nut-punching something like my thousandth victim, it occurred to me that Saints Row IV may end up being one of the most important games of the year. It’s certainly one of the bravest. That might require a bit of explanation.

It never gets old, and that’s remarkable for a game that should last over 25 hours.

Saints Row IV is in one sense a very natural evolution of Volition Inc.’s Saints Row franchise  that Deep Silver purchased the rights to from THQ. The series has grown famous – or perhaps, more accurately, infamous – for its crude humor and over-the-top … well… everything, from gameplay to presentation. It’s also not afraid to take risks, and I don’t just mean the risk of offending people. The series stopped caring about that a long time ago.

Everything about Saints Row IV screams “ease of use.” If you’ve played a lot of open world games, then you are probably used to starting out with very little and slowly working your way up to a point where you can actually roam around and cut loose. That’s unavoidable to a degree. You need to work towards something – a higher level, more weapons, cooler toys, etc. – in order to keep your interest and not turn the open world into just a huge map that features a lot of backtracking. That feeling of growing more powerful is there in Saints Row IV, but instead of starting low and ending high, you start high and end up off the damn charts. The max level is 50, but by the time you reach level 20, you are a vengeful god.

The story is built to follow the earlier games – the more familiar you are with these characters and their history, the more in-jokes you will appreciate – but prior experience is in no way required. SR4 even begins with an epilogue from Saints Row: The Third, but it’s little more than “the bad guy is alive, let’s kill him.” And if you don’t at least chuckle by the end of the prologue, you should just stop playing right then and there.

Through a barely explained set of circumstances that somehow makes sense within the logic of the Saints Row universe, you once again play as “the boss,” now in office as President of the United States. Don’t think too hard about it. Your term in interrupted when an alien race known as the Zin attacks Earth and begins enslaving its people. After awakening inside a simulation ala The Matrix, and then offending and destroying your way out into the real world, you discover that messing with the simulation actually helps to weaken the Zin. Again, best not to think too deeply about it.

Armed with the knowledge that destruction = salvation, you are given superpowers inside the simulation by returning character and friendly(ish) hacker Kenzie to run amok in a recreation of Steelport. The city is massive and detailed, but it’s actually one of the weaker aspects of the game.

SR4 was originally conceived of as a DLC for SR3. To Volition’s credit, SR4 is far, far more than a DLC could ever be, and it is its own game. It recycles a lot of the content from SR3though, including the city itself several of the mini-games (some of which are themselves recycled from older SR games). You’ll again see games like “tank mayhem” which is exactly like what it sounds, and “fraud” where you try to earn cash playing in traffic. Then you’ll see the same games with a slightly new slant, like “UFO Mayhem,” which is the same thing but in a flying vehicle, or “Mech Mayhem,” which is obviously in a mech. These game modes were fun in the last game and they are fun in this one, but they are still more of the same – except for the super powers.

Faster than a speeding mass murderer

You earn your first superpowers very early on: the ability to jump to incredible heights and super speed. Through a combination of leveling up, completing specific missions that pop up, and collecting the superpower currency “data clusters” located around the city (there are 1,255 to find, and it quickly becomes an obsession to find as many as you can), you can power up these, and other, abilities. There are eight in total to be unlocked, including four purely offensive powers.

Everything about Saints Row IV screams “ease of use.”

Super jump and super speed alone change the makeup of the entire game. There is an unbridled joy in simply running around the city faster than a car, sprinting up the side of building, only to leap off the top and then glide your way from one area to another. Hunting down collectibles like the clusters, audio logs, and destructible statues makes for as good an excuse as any to run around aimlessly. The offensive abilities are fun too (see below), but the brilliance in the gameplay comes down to the freedom of movement.

The offensive abilities consist of a power blast, telekinesis, a ground stomp, and a buff that imbues both you and your weapons with an “elemental” enhancement. Each power has multiple elements to unlock, and so each power has multiple ways to use it: for example, you start with an ice power blast, then earn fire later. Switching through the four power with the d-pad is easy enough, but changing elements by hitting the d-pad in the same direction multiple times until you get the element you want can get a bit cumbersome unless you stop the game by bringing up the weapons wheel and select it there.

There’s bizarre and imaginative arsenal of weapons range from the well-publicized “Dubstep gun” to the singularity gun to an assortment of upgradable weapons. In the previous game you may have needed to call a few homies in to help fight off waves of enemies, even though that ability remains, with a god set of powers and weapons you will rarely need to. The gunplay has also been improved. The previous game was headshot heavy, with one bullet to the head doing what 20 to the body could not. It’s more balanced in SR4.

The gameplay is intoxicating. It may at first feel familiar to fans of the Crackdown or the Infamous series, but SR’s total disregard for conventional things like consequences make it completely unique. You can, and probably will, spend hours just running around blowing stuff up, and that’s what makes this game so damn fun. You can lose hours wandering down streets, bringing hell with you, then jump into mini-game after mini-game.

The Saints Row games have never really created as much as they innovate. You may have seen the super abilities and many other gameplay elements before in other games, but Volition handles them so well. And it isn’t just the gameplay where you see improvements.

In a nice twist that almost doubles the number of missions in the game, you now have assignments from other Saints, who ask you to play mini-games to “study the simulation.” You end up playing the same games over and over, but they are generally fun and you end up earning rewards for completing a handful of them. Those rewards include new powers and weapons, so they feel worthwhile to pursue. The main missions themselves are also brimming with creativity. One may have you living out the surreal nightmares of returning Saint Pierce, who is terrorized by marketing images, while another becomes a 2D side scroller beat-em-up. There are also a handful of loyalty missions that further delve into the lives of the returning and new Saints, and although these are technically optional, they are absolutely worth doing, and the minigames are a nice palette cleanser between the more original missions. It never gets old, and that’s remarkable for a game that should last over 25 hours.

With any sandbox game, especially one so crammed with content, you expect a few glitches and bugs. It’s just a given, and SR4 is no exception. Most of these are minor and can be overlooked. You may need to restart a mission now and then, but the save system is great. As you get further into the game though, the glitches become more of an issue. In the final mission (which is actually several missions that bleed together), my game froze several times, and I was forced more than once to restart entire sections when objectives would simply disappear. It takes patience.

The co-op is also hit or miss. Volition has always been great about co-op play, and it is awesome to wander through Steelport with a friend, just wrecking stuff. There aren’t enough things to do with a friend though. You can play some (but not all) of the primary missions with a buddy, but the co-op specific content is limited to either a cat and mouse game in changing vehicles, or a battle. It’s the same thing over and over, just with a different set of variables. Tailoring the main campaign to be more co-op friendly (and although technically difficult adding four players as is becoming the norm), would have been nice.

Getting back to the whole idea that Saints Row IV is an important game: it is, because it is not afraid to break with convention. The Saints Row games have always been willing to push the limits of open world gameplay, but adding superpowers makes the traditionally third-person shooter series into something completely different. Volition puts the fun factor ahead of sticking to what made the series work so well in the past, and the dev team deserves a lot of credit for trying something new for it without losing what works. That may sound like a simple thing, but radically altering the formula of a successful franchise, even to add awesome powers, is gutsy.

There are a few glitches, and the co-op stuff could have been better, but thanks to sharp writing and a willingness to put fun ahead of convention, Saints Row IVis one of the  best games of the year. Volition’s choice to try something different in a franchise that is now four games deep is also an important lesson other developers could benefit from.

Topics
Mario Kart Live: Home Circuit’s studio has made an AR Hot Wheels game
Best PS5 Game Deals: Elden Ring, NBA 2K23, Sonic Frontiers, and more
Minecraft Legends: Release date, trailers, gameplay, and more
Over 100 PlayStation VR2 games are in development, Sony says
Forspoken settings: change these settings for a better experience
Add 2TB of storage to your PS5 with an SSD and save $70 with this deal
Fall Out Boy concert in Fortnite: start time, island code, and more
Marvel Snap is dangerously close to becoming a pay-to-win game
Every video game delay that has happened in 2023 so far
All missable characters in Fire Emblem Engage and how to get them
How to use PS5 voice commands
How to enter the Forbidden Meadow in Forspoken
Assassin’s Creed Mirage pre-order: Get a $10 Best Buy gift card