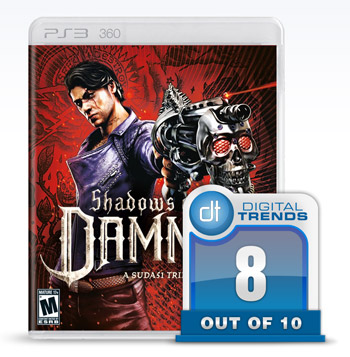 It was less than 20 minutes into playing Shadows of the Damned, that I knew I was hooked. If Quentin Tarantino and Robert Rodriguez decided to pair up and make a video game, it would probably look a lot like Shadows of the Damned. This game is a true grindhouse video game, complete with adolescent jokes, ultra-violence and all the trappings of an exploitation film, in the best way possible.

The story and visual design were enough to carry me through the hours of repetition and levels so linear that they became almost confining. But despite the problems with this game—and there are a few—one thing you can’t deny is that it has character. Even if you hate everything about it, and many people will, you have to applaud EA and Grasshopper Manufacture for creating a game that is unique in many ways. The fact that it is a new IP is almost remarkable in itself.

Shadows is the result of a collaboration between Goichi Suda aka Suda51, the creator of several games including No More Heroes and killer7, and Shinji Mikami, the creator of Resident Evil 4 and Vanquish. The pair became friends while working together on killer7. There is a distinct style that these two bring, and assuming this game does well, expect to hear more from them. They are the creative force, and their influence is easy to feel.

If you are a fan of the grindhouse-style exploitation movies, then this game is a must for you. In fact it should be at the top of your list. For everyone else, it is an interesting game that may grate on you if you don’t buy into the style. The humor is adolescent—your primary weapon is the hot boner, which is formed from the demon named Johnson—but it is in keeping with the theme the developers were hoping for. Sometimes the crudeness becomes a little much, and the jokes miss almost as often as they hit, but Shadows of the Damned is a game apart that has “cult hit” written all over it.

From the first minutes of the game when you begin a “movie reel” (instead of a “new game”), you have to either accept what you are seeing, or turn it off. You are quickly introduced to the protagonist, Garcia Hotspur, a foul mouthed, tattoo sporting demon hunter with a girlfriend named Paula who is kidnapped by the awesomely named King of the Demons, Fleming (although I admit a slight biased in liking the name).

Rather than accept that his true love is the plaything of demons, Garcia dives head first into Hell with only his Johnson at his side.

Johnson is Garcia’s sidekick, tour guide and primary tool. When not acting like a torch or explaining why things are the way they are, Johnson can become one of three weapons: a revolver, a shotgun or a machine gun. As you make your way through the streets of Hell, you will take on hordes of enemies and massive bosses while searching for Paula.

But like so many good grindhouse flicks, the film is about a man on a mission that will violently dispose of anyone or thing that gets in his way. There are even a few moments when Johnson claims that the demons are actually afraid of Garcia, to which he replies “they should be.” Classic.

Through it all Johnson will make countless observations which Garcia will typically have a crude joke to counter with, when he is not too busy generally being a bad ass. There is no question that this game is not for kids (despite the juvenile humor), and not just because of the disturbing graphics. It isn’t mature by any means, but it is for adults. It is the type of humor mixed with gameplay that the recent Duke Nukem Forever should have strived for.

As the creator of Resident Evil 4 is one of the people behind Shadows of the Damned, you should have a fairly good idea of what the gameplay will be like, which is a good and bad thing. If you enjoy the third person style of Resident Evil 4 that has permeated through countless games over the last few years, you will be right at home here. If you are a diehard FPS fan, they might feel sluggish and the aiming can be awkward, especially when an enemy is up close. The camera can also be an enemy in its own right as well, but the trade off is a slightly more cinematic experience.

For those unfamiliar with it, the left trigger aims, the right shoots, and you can roll and pivot 180-degrees. Once you get the feel of it, the controls are solid and should feel familiar to anyone that has played a third-person shooter recently. If you have played either of the Dead Space games, then you know exactly what to expect, including the odd sluggish movement and deadly corners that can trap you as off-screen enemies have their way with you.

One thing that differentiates Shadows is the use of…well, shadows. Hell is a dark place, partially consumed by an oppressive darkness that can actually hurt you. Sometimes the darkness will expand and make the world look as if it is covered in a dark film. When that happens, you have a bar that drains, and once that is gone your health begins to drain. The solution is to make it through the darkness quickly, shoot a goat head that will provide light (don’t ask), or collect human hearts to replenish your endurance (again, don’t ask). But more than just an environmental danger, enemies will sometimes be coated in darkness, which you will need to clear off them with a special “light-shot” before you can damage them. The further into the game you go, the more the integration of the darkness becomes apparent and it becomes more integrated into fighting enemies. It is an interesting addition to the combat and survival.

One of the best features about Shadows is the look and design of Hell. The graphics won’t take your breath away, but they are solid. Actually, if the graphics were more realistic, it would make some of the things in the game—like the infant door guards that you feed things like brains or eyeballs in order to get them to open—slightly horrible to see. The style is such that you just accept it. Or you are immediately offended and throw the game down before heading to the intertubes to protest the moral decay of the world. Either or.

Hell is not the fiery, brimstone-filled place you might expect. Instead it is a warped reflection of the world, with run down streets, houses filled with corpses and even the odd bar that serves things like sake and tequila, which act as healing agents. The level design gives you very little freedom when exploring, which feels constricting, but it fits with the movie idea. Obviously the gameplay is important, but Shadows is more interested in the presentation that how it plays, and the art design is at times good, and at times amazing.

As you progress through Hell, the levels grow increasingly more bizarre and grotesque. It is a very specific type of art that goes with the exploitation style, and the music is also spot on for the game. It matches the tone perfectly and is a stand out feature of the title.

There is an upgrade system that makes the guns more powerful and offers things like secondary fire options, which makes having just three weapons plenty. But with a few exceptions, there isn’t much to explore beyond the odd nook and house. The game is linear to a fault.

Even if you are a huge fan of the grindhouse genre and love you some exploitation films, there are a few things in Shadows that hold it down a bit. This game is cursed (get it? Cursed?) by repetition. Lots and lots of repetition, especially in the early levels. The gameplay is fun enough, but nothing really stands out or is original, especially when it comes to boss battles. Some of them are a blast, but most of them are a matter of hitting the glowing read orbs (the human blood reservoirs that make powerful demons more powerful), which is slightly annoying at times. You run, you shoot the red orb, you run some more. A few of the boss fights are kinda epic, but most are repetitive and will take repeating the same pattern over and over again.

One early boss fight has you running through a bizarre (possibly an evil bizarre), and you shoot a barrel filled with light to knock down the boss and expose his vulnerable head to shoot. Then he gets up and you repeat the process for 10-20 minutes.

Like Dead Space, the camera is right on you, sometimes too close to tell what is going on. It sometimes limits what you can see on the screen, and it cuts off a decent chunk of what you can see, which leads to getting blindsided quite a bit as enemies rush you.

Overall these are minor problems, but the gameplay is more of the same, flaws and all. One strange issue though comes when you beat the game. As you progress you level up weapons, but you probably won’t come close to maxing out each of the categories. When you beat the game, you can’t carry over your save and continue as you can with many other games that have similar progression systems. It limits the replay value a bit and will aggravate people that obsess over leveling their characters.

The game is also fairly short, and will take less than 12 hours for most. There is no multiplayer or online, so the replay value is questionable. Basically you are paying $60 for a 10-12 hour movie.

There are a flaws that may keep away the average gamer, but for people that have even a slight interest in the grindhouse genre, or just people looking at a new style of video game storytelling, Shadows is a game that must be played.

The humor is hit or miss, and when it misses it is outright dumb, but that is the risk you take with a game where the weapon you use is a joke about guy’s genitalia. If that is a problem for you, then the entire game is going to fall flat. You also need to be ok with a touch of the ultra-violence. If you enjoyed movies like Inglorious Basterds, then you’ll be fine with Shadows. But despite the issues, Shadows is a fun game that is engrossing, immersive and fun.  If you buy into the style, you will be hooked, and then you will probably pester your friends until they try the game themselves.

Shadows of the Damned isn’t a perfect game by any means, but it is an experiment in storytelling, and that is always a welcome addition to the world of video games, especially when it is done well, as it is here. In a year in the video game industry dominated by sequels and new additions to long running video game franchises, to even release Shadows is impressive. Thankfully it also happens to be pretty good too.