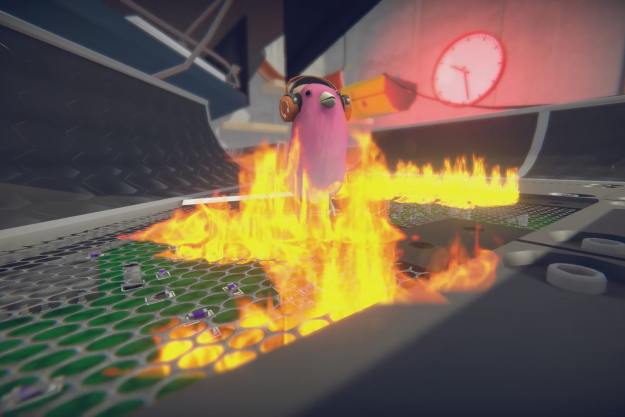 The skateboarding game genre has a lot of established royalty. If you’re looking for something very arcade-y, you play Tony Hawk’s Pro Skater, while Skate 4 or 3 will offer a slightly more realistic (but still entirely bombastic) experience. Regardless of how you look at it, these two franchises own the skating genre, much like Call of Duty and Battlefield own multiplayer shooters. There are others out there, but they don’t stack up.

Now we have Skatebird, which swoops out of nowhere and immediately shows that while it’s not going to take away the crown from Tony Hawk’s Pro Skater, it was also never designed to. Instead, Skatebird is here for folks to have a fun, albeit sometimes frustrating time. It’s a goofy arcade skateboarding game filled with fun dialogue and silly references that doesn’t promise to give anyone the skating game of their dreams. But it will at least brighten up your day.

The entire premise of Skatebird is written in its name, and if you’re not used to jokes like that, just leave this review now. You’re a bird that skates. Skatebird sounds like skateboard. Get the picture? Good, moving on.

In Skatebird, you grind, flip, and chirp (or as the game calls it, “screm”) across mundane areas as a tiny, gnarly bird. The game has all the trappings of a typical arcade skating game, starting with character customization, with players able to choose what kind of bird they want to be and what goofy accessories they want to wear. Naturally, I went with a cowboy hat that always stayed on.

After a quick introduction, players are thrown right into the game’s first area: A massive bedroom that belongs to their bird’s Big Friend. Unfortunately, Big Friend is feeling down, so the skating bird, along with a flock of others, decides to escape from the room, figure out why the friend is so miserable, and fix the issue with the power of skating.

Skatebird‘s story is one pun after another, all with a subtle background of anti-capitalist sentiment …

In short, the bird’s owner has a crappy job at a crappy tech startup, which the birds naturally sabotage, first by diverting the boss’ AC out of his office and to everyone else, and then by destroying servers and more. Skatebird‘s story is one pun after another, all with a subtle background of anti-capitalist sentiment, and if the idea of capitalism-hating birds doesn’t put a smile on your face, I’m begging you to get a sense of humor.

It’s a bummer to say, but Skatebird‘s goofy story and silly jokes are the stars here. The game sticks to its arcade style, with each face button controlling one move. One button does an ollie, another does grinds, another does grabs, etc. That’s about the best part of Skatebird: It’s easy to control. You decide when your bird does a grab or grind. What’s much, much harder to have any influence over is whether you actually successfully land after performing a trick.

Skating in Skatebird has all the grace of a bird on a skateboard, which is precisely none at all. The bird is more like a fish in the air, flopping around without any sense of direction. I’ve done tricks and then tried to land on the ground, only to have the board pointing at a 45-degree angle for some reason, which leads to my bird absolutely eating tar. The game seemingly plans for that, though, giving players control of their bailed bird, which can be rolled around for fun, but that feeling only lasts through a few failed landings.

Getting around with wheels on the ground isn’t any better, as Skatebird‘s wonky physics engine regularly decides that a small bump into an object is enough to knock your bird off. At other times though, you’ll build up speed and hit a wall, unable to turn around because the game seemingly still thinks you’re accelerating, meaning you have to bail out.

Situations like that are made even more infuriating when you realize it’s not very easy to build speed in Skatebird. Birds, naturally, can’t pump on a skateboard. Instead, the game has a “Fancy” meter, which players fill by going up and down ramps to go faster. Before performing any large jump or long grind, you have to snake your way through some ramps, while still ensuring that you don’t bump into something or fall off the board, which makes for a frustrating challenge.

Skating in Skatebird has all the grace of a bird on a skateboard, which is precisely none at all.

What Skatebird lacks in grace, it makes up for in charm. While around half of my moment-to-moment gameplay was spent annoyed at my bird for deciding to see what pavement looks like close up, the other half was spent grinning like a goofball. Skating around to the game’s fantastic soundtrack, which fits in perfectly with other skating game soundtracks and will likely end up on my Spotify soon enough, is an absolute blast. Small touches like this made everything else bearable.

I don’t believe Skatebird was made to be the best skating game ever, mainly because it’s so far from earning any such achievement. Instead, Skatebird‘s here to be a distraction — something fun and goofy to take your mind off things. It’s admittedly hard to think about paying rent or other heavy subjects when you’re playing a silly little game about a silly little bird on a silly little skateboard.

If you end up buying Skatebird, don’t expect it to reinvent the genre. It doesn’t. But this game could have been about birds that dive underwater and explore (working title: Skubird), and as long as it brought the same charm and sense of humor, I would have enjoyed it all the same.

I’ve put about five hours into Skatebird, but if I tried to collect every collectible and beat every mission, it would likely take upwards of seven.

Yes, albeit with the caveat that you temper any expectations. Skatebird isn’t a game about skating birds, but a game about birds that can skate.

Skatebird gets a new trailer and official summer release date

Christian Bale is involved in a murder in Amsterdam trailer