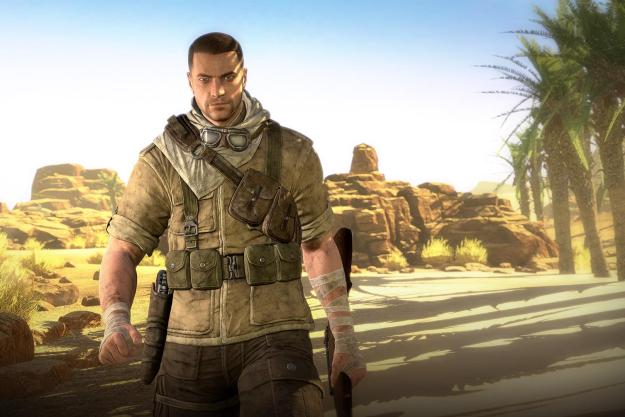 “Sniper Elite 3 is the first entry in the series that isn’t just defined by its ever-gory, bullet-tracking killcam.”

Assuming the role of a sniper in a video game is all about achieving that perfect moment when you draw a bead on your target and pull the trigger. Rebellion Developments’ Sniper Elite series hasn’t ever had a problem with elevating the spectacle around that moment, thanks in large part to its trademark X-ray killcam. It’s fleshing out the spaces in between that the team has struggled with in the past.

That’s how Sniper Elite 3 succeeds where its predecessors failed: Rebellion finally figured out how to fill the spaces in between.

At the most basic level, Sniper Elite 3 is a third-person shooter set during World War II. The largely inconsequential story follows OSS sniper Karl Fairburne across World War II’s North African theater as he works to uncover and bring down a German secret-weapons program.

Cutscenes before and after each mission establish a coherent narrative thread from beginning to end, but there’s no character development to speak of. The plot is mainly a product of the mission order, a barebones framework that’s meant to tie together each hour-plus journey behind enemy lines. If you’re looking for a WWII story with heart, try Wolfenstein.

Gameplay is the highlight in Sniper Elite 3, and not just the moments viewed through a rifle scope. Rebellion steps away from the relatively corridor-driven design of its previous efforts to realize much more of an open landscape. While choke points and visual obstructions help keep objectives separate, you’re still left with a series of playgrounds that are built around stealth, recon, and long-range engagements.

This open-ended approach to level design creates many opportunities for emergent moments. Sniper Elite 3’s enemy AI isn’t always the sharpest, but it’s one you can toy with. There’s a real thrill in spotting a patrol through your binoculars, then using the noise from a faulty generator to mask your rifle report as you drop each one. Accidentally give away your position? No big deal. Make your own escape route, and drop traps like trip mines behind you to shake pursuers.

With Sniper Elite 3, Rebellion successfully turns its series into something more than just a flashy killcam.

All of this plays out over just shy of a dozen hour-long missions, each with its own unique layout concerns and tactical opportunities. Without linear corridors to funnel the action along in, Sniper Elite 3 places just as much emphasis on stealthy planning as it does on execution. The quiet moments are further broken up all throughout by sequences built around going loud, from protecting VIPs to taking out armored attack vehicles.

All of the mechanical refinements are further bolstered by heaps of online play possibilities. There’s an assortment of competitive multiplayer modes, the most promising of which is No Cross, a team deathmatch game that separates the two squads, forcing an epic sniper showdown. There’s also a wave-based survival mode (solo or co-op), a pair of cooperative Overwatch missions, and the ability to play through the entire campaign with a second human backing you up.

It’s not entirely perfect. Fiddly controls and the odd invisible wall occasionally create barriers between planning and execution. You can mantle waist-high crates and hoist up to ledges one moment, but you’re barred from scaling a gentle slope that starts at a knee-high outcropping. These instances are rare and they don’t shatter the illusion, but they’re frustrating.

Enemy AI is also somewhat inconsistent. The machine intelligence is ostensibly pegged to each soldier’s rank (denoted in the HUD) and the overall difficulty, but sometimes the lowest-ranking soldiers spot you from afar while the so-called “Elites” miss Karl hiding in the bushes from inches away without the slightest recognition.

That said, Rebellion built in a “custom” difficulty setting alongside the stock ones that allows players to tweak enemy AI, bullet physics, and HUD realism separately. It doesn’t fix the questionable AI moments, but it’s a welcome touch that offers more of a tailored experience than you’d typically expect from a third-person shooter.

With Sniper Elite 3, Rebellion successfully turns its series into something more than just a flashy killcam. There’s a deep, replay-friendly game here, one that capably serves up an escapist fantasy for would-be virtual sharpshooters. The gore is still there for those that want it, but Sniper Elite 3 shines when you turn that stuff off and fall into the fiction of being a World War II sniper.

This game was reviewed on a PlayStation 4 using a disc provided by 505 Games.