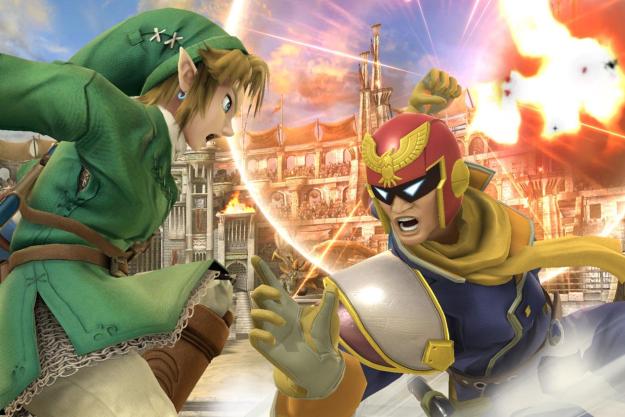 “The action's the same as Smash 3DS, but the Smash Wii U package itself is unexpectedly different in ways both big and small.”

Super Smash Bros for Nintendo 3DS was a very big surprise in a very small package, in that it didn’t feel like an opening act for Super Smash Bros. for Wii U. More than that, Smash 3DS turned out to be one of the best portable fighting games ever made, densely packed with both single and multiplayer activities, with fast fighting that massively improved on 2008’s Super Smash Bros. Brawl.

The surprise was that Super Smash Bros. for Wii U seemed to no longer be the main event. Perception transformed it into a big and beautiful showcase for this already great game, with the added bonus of multiplayer hijinks on a single, shared screen. And Super Smash Bros. for Wii U is precisely that, but against all odds, it’s just as surprising as its handheld brother. The action’s the same, but the package itself is unexpectedly different in ways both big and small. Smash Wii U is its own, excellent beast.

Smash Wii U is its own, excellent beast.

Up front, it should be stressed that the fleet fighting demonstrated in Smash 3DS perfectly translates to the big screen. Everything that was true about that game is true here, and if you want a more exhaustive detailing of what’s fresh about this edition’s new roster, please refer to Digital Trends’ review. Little Mac’s boxing is a brilliant mix of swift jabs and stage-spanning jump punches; Shulk’s distinctive selection of buffs makes him a strategist’s delight; Rosalina’s combo with pudgy star Luma is a treat for players who like to control space; the newcomers are all welcome.

Smash Wii U actually lets you use them a whole lot sooner than Smash 3DS, though. Ganon, Bowser Jr., Jigglypuff, and Ness are all unlocked right from the start. While there’s still some grinding to do to unlock the others, like wild goofball Duck Hunt, Smash Wii U smartly eases access for its wealth of multiplayer riches.

One knock against it, however, is that it doesn’t let Smash 3DS players transfer over a save if they’re already unlocked all the characters. It’s an odd and irksomely anachronistic piece of design that reeks of Nintendo’s reluctance to modernize. Not all of Smash 3DS is locked away since you can transfer custom Mii fighters (also excellent additions to the series), but even that’s not ideal since transferred Mii fighters can’t be further customized on Wii U.

Nintendo’s bizarre, unfriendly technical restrictions are more jarring considering how deeply friendly it is in other ways. It’s an odd thing to be impressed by, but Smash Wii U‘s support for a variety of controllers is notably unique. The company went so far to satisfy diehard series fans that it released an adapter to support controllers from its GameCube console and even manufactured new ones to sell alongside the game. Using those controllers feels great, every bit as satisfying and ergonomically comfortable as they were back in 2001, but most impressive is how there are no hoops to jump through setting them up.

Fire up Smash Wii U and you can just use whatever’s handy. A Wii remote with a classic controller plugged in, the Wii U’s tablet pad, a wired Gamecube controller or a wireless Wavebird from the same machine, or a Wii U Pro Controller; they all work with no added setup beyond an extra syncing step. Even using a 3DS as a controller – yet another of the available options – is quick and painless. This usability is essential in facilitating Smash Wii U‘s biggest difference: 8-player fights.

Nintendo only announced that Smash Wii U would allow 8-players, double the traditional number, to beat the hell out of each other in October, but it’s by no means a tacked on feature. In many ways, Smash Wii U is defined by larger-scale brawling. With only a few exceptions, all of the stages are distinct from those in Smash 3DS and they’re brilliantly massive. The elemental panoply of caves in the The Great Cave Offensive pulled from Kirby Super Star is as claustrophobic as it is huge, while the Kid Icarus Sky Palace is so big and open that it allows eight fighters to pair off into smaller, more personal skirmishes.

It works marvelously. The added chaos of twice the punchy toughs isn’t suited for the precision of tournament play, but it is a blast to play and remains intelligible. Fighters are sometimes obscured by health meters if they’re at the bottom of particularly huge stages, but in general the big fights never descend into complete, unplayable madness. It’s a powerful example of how Smash Wii U uses its more powerful hardware to expand the game with more than just a graphical facelift.

Wii U can’t do everything, though. Only some of the stages are available for more than four-player fights, though the big brawls aren’t just restricted to big stages. The resurrected Donkey Kong 64 stage, which is just a tiny wooden platform suspended over a river, gets downright nuts with a full party.

The big scale fighting even infiltrates its way into other modes of the game, making them wholly unique from their counterparts in Smash 3DS. Classic mode on Smash 3DS was a single-player journey to fighting final bosses Master Hand and Crazy Hand, but in Smash Wii U you’re plopped onto a large open board with gangs of AI-controlled fighters. As you beat up these little squads, like a crew of Sonic the Hedgehog and five others backing him up, you accrue them to your own squad.

Smash Wii U‘s support for a variety of controllers is notably unique.

When you get to the penultimate fight before a face off against an army of Mii fighters then Master Hand, you can choose one of your acquired buddies to join you. It’s admirable that Nintendo went so far to make something like the single-player mode so different between the two versions of the game, and to have them be equally, pleasurably time consuming. It’s a blast to play Smash Wii U‘s classic mode, as it is to tackle its unique challenge modes alongside it.

Not all of the new material is based around the bigger fights. Smash Board, a neat four-player board game that blends Smash Bros. with the light antagonism of Mario Party, replaces the byzantine Smash Run from 3DS. Smash Board has you spinning a wheel for a set number of turns (the standard is 20), while you guide a Mii around the board collecting items, stat boosts, and characters from the game, all leading up to a big fight between the players when all the turns are used up.

The items are used to alter the board, like an Excitebike icon letting you move double the spaces, while the stat boosts change how your fighters picked up on the board play in that final confrontation or when two Miis bump into each other, which also triggers a fight. A great way to structure partying with friends while playing Smash Wii U, Smash Board’s definitely not meant for solo players even though you can play it that way. It’d be a bit like playing Trivial Pursuit by yourself: deeply lame.

One quick note about the online play: it isn’t perfect. While Nintendo provided copies of the game almost two full weeks ahead of time, online fights were only made available minutes before Smash Wii U’s proper release. On testing, brawls over the Internet run into the same hiccups as they do on Smash 3DS. Stuttering makes some fights feel jerky, rendering high level, precision tournament play impossible.

In one online fight, the action froze and hung for a full 30 seconds. (Count it out. That’s a very long time.) Others with four players on active stages, like the Metroid-themed level where a giant dragon robot named Ridley constantly attacks you, played through with minimum fuss. At launch, the online feels functional but inconsistent.

Then there are the Amiibo. Nintendo’s Skylanders-esque statuettes are not essential to Smash Wii U, nor are they unwelcome. As AI teammates or opponents, they can be absolutely ferocious. After playing with a group of six players for 2.5 hours, we almost managed to max out a Mario Amiibo, growing him to Level 41 out of 50, all the while his stats and knowledge of our play style increasing.

By the end, it was luring human players to dangerous sections of stages and laying down punishing, precise moves. When closing a session and tapping the figure back on the Wii U pad to save the new data, the figurine feels impressively personal and distinct. That’s precisely the hook that’s made Skylanders and Disney Infinity so successful, and while it doesn’t redefine Super Smash Bros. as a game, it’s an experiment that resonates with powerful emotion.

Which is true of Super Smash Bros. for Wii U as a complete package. Its gorgeous artistry, its ocean of activities, varied cast and swift, idiosyncratic fighting, all of it evokes a sense of freeing camaraderie with other players and winsome, humorous chaos even when you’re by yourself. Whether it bests past entries like Super Smash Bros. Melee or Brawl doesn’t matter; it’s a spectacular work unto itself. That it’s also unique sitting next to Super Smash Bros. for Nintendo 3DS marks it as the work of peerless craftspeople.

This game was reviewed on a Wii U using a disc provided by Nintendo.

Wii U - Super Smash Bros. for Wii U TV Commercial