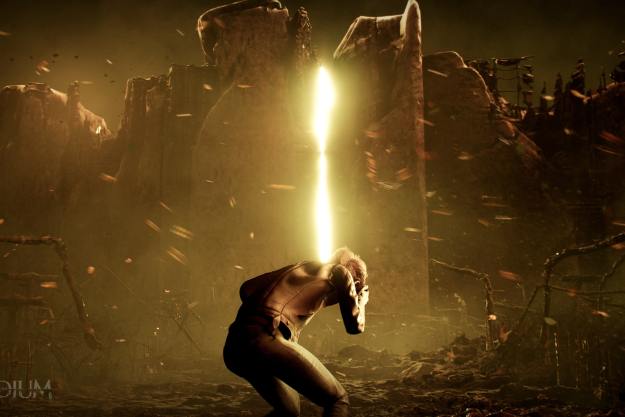 “The Medium is a chilling tone piece that's bogged down by retro influence and a protagonist that can't stop oversharing.”

The Medium is stuck between two worlds. Just as its protagonist, Marianne, simultaneously navigates the worlds of the living and dead, the game itself exists as both a modern psychological thriller and a PlayStation-era horror throwback.

Developed by Bloober Team, The Medium wears its influences on its tattered sleeves. The slow-paced horror game will feel immediately familiar to Resident Evil diehards thanks to its fixed camera angles, investigation-heavy gameplay, and sometimes goofy dialogue. At the same time, it delivers a dark and serious story that feels more in-line with recent games like Hellblade: Senua’s Sacrifice.

While The Medium delivers with stunning visuals and a genuinely unsettling universe, it’s held back by old school horror game hallmarks that only ham up an otherwise effective tone piece.

The Medium follows Marianne, a medium who is not only able to communicate with the dead, but enter their world. After losing her adopted father, she follows a mysterious phone call to a dilapidated hotel in hopes that she can find some answers about her past. The game kicks off with a particularly strong introduction that sets the stage for a quiet, atmospheric story that leans into creepy visual storytelling.

That doesn’t last long. The game heavily relies on voiceover to have Marianne relay exposition to the player. Every time she picks up an item, she’ll muse about its purpose, leaving no ambiguity about what players are supposed to do with it. When she’s not doing that, we hear her constant internal monologue explaining exactly what’s happening on screen. In one puzzle, she notes that a statue looks “lonely” and quickly clarifies that it’s as if it’s “missing a piece.”

What’s more jarring is that she’ll often quip like a Marvel superhero at the most inappropriate moments. The Medium tells a deeply raw story about repressed childhood trauma that includes difficult depictions of abuse. Those moments are visceral and haunting, but they lose their power when interspersed with hammy one-liners.

While it seems like the game is trying to alleviate the bleakness, it sometimes feels like it’s not taking itself seriously enough.

Video games are no stranger to oversharing with players or delivering flat jokes. The original Resident Evil games practically built their name on bad dialogue. The difference is that those games are digital B-movies rooted in pulp horror. The Medium, on the other hand, tackles several sensitive topics in a head-on way that is going to be difficult for some players. While it seems like the game is trying to alleviate the bleakness, it sometimes feels like it’s not taking itself seriously enough.

When it comes to gameplay, The Medium errs on the side of minimalism. There are no weapons, no combat, and only one real “monster” in the entire game. Instead, it’s entirely based around exploration. Most of the game is spent interacting with objects and doing some light puzzle solving. Some of the game’s best moments come from Marianne learning about the dead through items they left behind.

That gameplay feels right out of the old school Resident Evil handbook, though it misses a few pages. Despite exploring a sprawling hotel, the game is extremely linear. Every time Marianne picks up an object, it’s always going to get used within a few minutes. Rather than building on Resident Evil’s twisty puzzle box mansion, it references the game’s mechanics without the context. That waters down the sense of exploration and makes everything feel a little on-rails.

The game’s main hook is its dual reality gameplay, which is similarly half-baked. At certain points, the game breaks into a split-screen where players are controlling Marianne in the living and the dead worlds at the same time. It’s a mind-bending spectacle, but one that never quite takes full advantage of its potential. Gameplay consists of simple puzzle solving that usually boils down to “electrify a fleshy panel or cut through a wall of skin in one world to open a path in the other.”

Most of the time, it felt like a one-trick gimmick. I rarely felt like I was getting anything out of seeing two images at once. My eyes generally always stayed glued on one side of the screen and there were rarely any consequences to ignoring the other. The best use of the effect only comes during the final cutscene of the game, which especially underscores how underutilized the idea is.

It’s a mind-bending spectacle, but one that never quite takes full advantage of its potential.

Bloober Team is certainly on to something here and it feels like the studio could take the idea further in a sequel. Despite that potential, I found myself much more captivated by the game’s lonelier sequences by the end. Even with some tense sneaking scenes and some light supernatural abilities, the moments where Marianne simply soaks in the tragedy around her felt more haunting than any creepy monster.

If it seems like I’ve yet to touch on the actual horror aspect of the game, that’s because The Medium takes a more cerebral approach to fear. Rather than relying on cheap jump scares, the game opts for effective psychological terror. It’s a morose tone piece that’s frequently unsettling on the strength of its decaying environments alone, from rundown hotel rooms to charred houses soaked in ash. That’s a refreshing change of pace from the kind of scare bait designed to net streamers millions of views.

The Medium is the first game to really make a case for the Xbox Series X’s power.

Part of that success comes from Team Bloober’s willingness to test the limits of new gaming tech. The lighting sets the mood thanks to ray tracing, with harsh highlights cutting through stark shadows. The game’s alternate world brings the art of Polish surrealist Zdzisław Beksiński to life with grotesque detail.

Then there’s the dual reality centerpiece, which is the kind of magic trick usually reserved for tech demos. Even if the gameplay aspect underwhelms, it’s still the kind of powerful spectacle only possible on a new piece of hardware. Considering that Xbox Series X didn’t launch with any true exclusives, The Medium is the first game to really make a case for the console’s power.

Add in an excellent, unnerving score and The Medium has all of the aesthetic markings of a slow burn horror hit. That’s why its flaws are so particularly frustrating. It feels like the game never has enough faith in itself to get by on set-dressing alone. There’s always a voiceover to vocalize what players see and even go as far as to explain what emotions the settings are trying to evoke. All of the visual information speaks louder than Marianne’s voice and it’s a shame that the game is so hesitant to trust its own instincts.

Beneath the layers of hammy dialogue, undercooked retro influence, and gimmicky design, The Medium is an emotionally challenging horror game that trades genre clichés for genuine psychological distress. The chilling aesthetic could make for a harrowing new franchise, but any sequel should spend less time trying to be the next Silent Hill and more time trying to be The Medium.

The story is over in 8 to 10 hours and there’s virtually nothing to come back to once credits roll.

No, at least not for full price. That said, it will be available on Xbox Game Pass at launch, so it’s at least worth a curious glance for horror fanatics and Series X owners looking to push the console’s power.

Topics
The Xbox Series X games with the best graphics
Xbox Series X tips and tricks: how to set up your new console
High on Life includes a full ’90s cult movie that you can watch in-game
Microsoft’s price hike on Xbox games will apply to PC, Steam
Goldeneye 007 comes to Game Pass and Nintendo Switch later this week
The best iPhone games in 2023: 31 games you need to play right now
I can’t believe I’m recommending Forspoken on PS5 over PC
Redfall’s May 2 release date revealed during Developer_Direct
The best Fire Emblem games, ranked from best to worst
Xbox just surprise announced and released a stylish new Game Pass title
The Elder Scrolls Online’s 2023 updates bring players back to Morrowind
How to cheat in Words With Friends
Shoulders of Giants brings mascot-era nostalgia to the roguelite genre