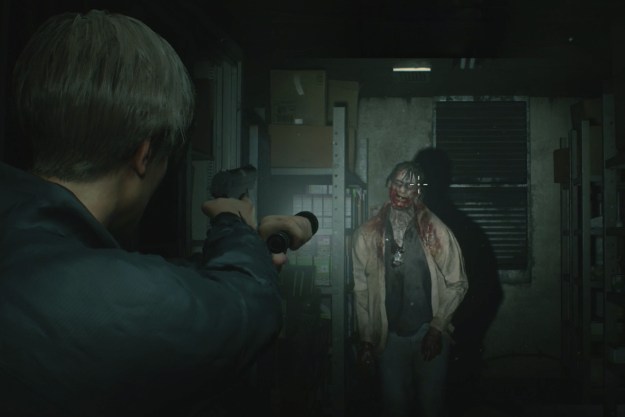 “‘Resident Evil 2’ is a fully modern horror game that will please new and old fans alike.”

Resident Evil 2 is considered a classic survival-horror game for a reason. Its zombie-infested Raccoon City is among the creepiest settings ever seen in the medium, successfully building on classic Romero-era tropes with its own lore, twists, and terrifying monsters.

20 years later, instead of slapping on a new coat of paint and tweaking the controls, Capcom has completely remade Resident Evil 2 from the ground up. It’s a game that feels like it used Resident Evil 7 as its framework — RE2 for a new generation — and all without losing the essence of Leon and Claire’s original journey.

The plot of Resident Evil 2 is identical to the original game, though individual events occasionally happen in different ways and the characterization has been modified. Left without orders during his first day in the Raccoon City Police Department, Leon S. Kennedy heads into the city to find it on the verge of total collapse, with infected creatures roaming the streets already ablaze and eating the remaining humans. Claire Redfield, on the other hand, is looking for her brother Chris, and a chance interaction with Leon leads the two of them on a mission to regain control of the city and put a stop to the nefarious Umbrella Corporation.

It’s a small part of a story that has ballooned to include six other main installments, countless spinoff games, comics, novelizations, and even three animated movies. Resident Evil 2 still manages to feel like a perfect entry point for new players. Aside from a few names and references to S.T.A.R.S. from the first Resident Evil, it essentially serves as the start of a story. Longtime fans will enjoy seeing the appearance of characters that would go on to be major figures in other titles.

Zombie screams are gruesome and gunshots ring out with an impressive amount of force.

Ada Wong and Sherry Birkin are both still heavily featured, and you get to play as each in segments that further explore their psyche and, in the case of Ada, her motivations. The backstories you’ve heard regarding some of the major characters have been altered, which makes RE2 worthwhile even for those with encyclopedic knowledge of the original release.

Welcome to your nightmare

Taking place in more open-ended environments than in Resident Evil 7’s Louisiana mansion, Resident Evil 2 is even more terrifying. The police station – which serves as the setting for nearly half of the game – has surprises around every corner. Whether it’s a “Licker” ready to slash your throat or a grisly murder scene with fresh blood pooled on the floor, the Raccoon City Police Station will easily keep you in a state of fear with its plethora of horrors.

The power of the RE Engine allows for every gristly piece of flesh and every blood-stained tooth to come to life, and it looks particularly impressive on the PlayStation 4 Pro. Where Resident Evil 2 shines even more, though, is in its sound design. Zombie screams are gruesome and gunshots ring out with an impressive amount of force.

The upgrade to sound isn’t just window dressing, either. You must use audial cues to plan your next move. As a certain famous and nearly indestructible enemy attempts to locate you across different locations, you must listen for his footsteps, growing ever louder as he marches down the hallway. Make a wrong move, and you’re forced to go face-to-face with one of the scariest villains in video games.

Just like in the original game, completing one character’s storyline in Resident Evil 2 means you’re essentially halfway done with the game.

Fortunately, it’s much tougher to make a wrong move in 2019’s Resident Evil 2 because the control scheme and perspective have been overhauled to more closely resemble Resident Evil 4 and Resident Evil: Revelations 2. Using a tight over-the-shoulder camera angles and traditional third-person shooter aiming, Leon and Claire can quickly aim at the head, legs, arms, and oozing, blistering weak spots of an enemy before blasting off several rounds. Weapons have a sense of weight that makes it necessary to readjust after firing, all while enemies continue to close in.

By and large, combat feels satisfying and you have enough tools at your disposal – shotguns, grenade launchers, submachine guns, and heavy revolvers – to take out most threats you’ll come across. It also seems that in an effort to emphasize the “survival” aspect of survival-horror, it can sometimes take six or more headshots to fully kill a zombie. Granted, this is with some of the weaker weapons in the game, but getting a bite taken out of your neck after perfectly lining up a shot is still frustrating. Your running speed is also painfully slow, almost as if both protagonists pulled their hamstrings right before the game began.

Put on your thinking cap

As is the case in most Resident Evil games, killing zombies is only half the fun in Resident Evil 2. Every location you visit is filled with puzzles, ranging from finding the correct key for a door to dispensing the right amount of herbicide into a vial. Solving these typically involves leaving and returning to a number of different areas, and searching for clues in the environment or in your inventory, all while keeping precious track of your supplies.

If you run low on healing items or ammunition, you’ll have to get creative when moving through infested areas. Luckily, the game’s location maps let you easily see all locked and unlocked doors, as well as any items you haven’t picked up in a particular room. New locations almost always give you enough resources to prepare for what lies ahead, but not more than enough. You’ll rarely feel fully confident, and that intensifies every single scare.

Just like in the original game, completing one character’s storyline in Resident Evil 2 means you’re essentially halfway done with the game. You then complete a second run using whichever character you didn’t use before, going through many of the same areas but with more context and a new perspective on why certain events occurred.

There’s no denying that Capcom has delivered an impressive remake fully worthy of its title.

It’s crucial to complete this part of the game in order to fully understand Resident Evil 2. Some changes in a few puzzles and scenarios give you more to do, but it does still feel like you’re retreading content you’ve already experienced, with odd continuity changes that make it feel less like the second half of the story and more like a second interpretation of the story.

Play through the “A” and “B” routes in Nier: Automata, which has a similar structure, and the game gives new details on what you experienced without ever contradicting itself, making it worthwhile to replay large sections of the game. Resident Evil 2, however, could benefit from only focusing on what is new. The novelty of fighting a tough new enemy is largely gone when you’re doing it again and already know all of its weaknesses.

While Resident Evil 2 could have bettered its story structure for 2019, there’s no denying that Capcom has delivered an impressive remake fully worthy of its title. The scares, classic environments, and drama are all fully intact. With voice performances that aren’t laughable and an upgrade to the audio, it all feels way more believable and authentic. Resident Evil 7 may have showed us that the series could exist as a first-person franchise, but Resident Evil 2 proves Capcom has plenty more to offer in the future.

Not if you want to experience the Raccoon City story, though Resident Evil 7 is a slightly superior horror game.

Completing Leon and Claire’s portions of the story took us just under 16 hours, with most of that taking place in the first half.