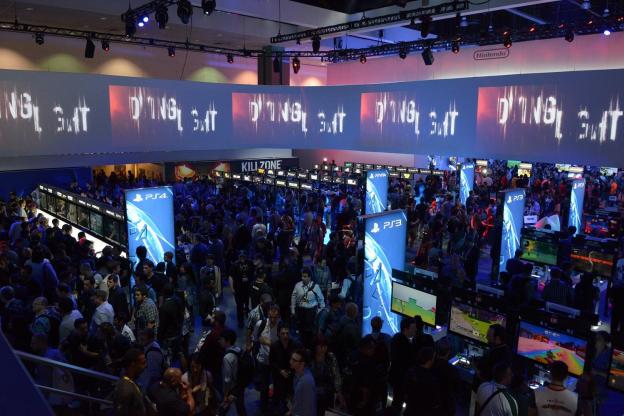 If you follow E3, then you probably already know about the award winning stuff, as well as the winners and losers from the show. If not, and if E3 just isn’t your thing, then what are you doing in this article? Lose a bet or something? Thanks for your loyalty?

Picking out categories for the major awards is easy. You have things like Best Shooter, Best Action game, Best console exclusive, etc., etc. But what about the other games, events, and organizations that go unsung and unheralded? What about the children of the developers that revealed games that weren’t long enough to merit bigger coverage? Won’t somebody please think about the children?!

So with that in mind we wanted to chuck out some kudos to a few others that deserved a bit of love but may not have got it. The misunderstood. The under appreciated. The hostage-takers. This one is for you.

What’s with the name? It comes from our prestigious Sad Panda Achievement Award given out at the very end – or Pandie, if you will. You will.

Most impressive game that we know absolutely nothing about

Look, we like Remedy. Really, Alan Wake is a delight, and Alan Wake’s American Nightmare lives up its predecessor. Max Payne on the PC is killer as well. Even Death Rally is awesome, despite having the audacity to have a title that isn’t a person’s name. Quantum Break is totally ambitious too. It’s a game. No, wait, it’s a TV series. No, it’s a… a thing. That you can play. And watch! And your choices matter. And there’s something about a space-time experiment gone wrong….

Okay, we’re really not sure what’s happening with Quantum Break, but you have to love Sam Lake’s moxy in pimping it out at E3 2013 with almost nothing to show beyond a few promising snippets. It’s all a lot of big promises and forward-thinking ideas at the moment, but that’s really, really okay. We believe in you, Remedy. Just please, pretty, pretty please – don’t take as long with this one as you did with Wake. Seriously. That’s not a joke, we’ll be genuinely mad.

Best knock-off of another popular franchise

Most promising peek at the imminent robocalypse

Turn 10 Studios put together a very intelligent game in Forza Motorsport 5. Very, very intelligent. In fact, it learns. And grows. And evolves. And it will one day enslave and possibly murder us all. But in a fun way!

As you play Forza 5, the game monitors your driving skills and habits and, over time, builds a virtual replica personality that plays the game when you’re not there. It races online under your name and earns you cash that you can spend on additional cars and upgrades. How do we not see a problem with this?! When the world ends in five years because some asshole’s Drivatar develops self-awareness, don’t say we didn’t warn you.

Runners-up: Absolutely nothing. We are doomed.

There was no bigger on stage press conference surprise during the whole of E3 than the Peggle 2 reveal that happened in the early portion of Electronic Arts’ presentation. Just look at this madness:

Amirite? Who could possibly have pulled a crazier “what the crap just happened?!” stunt than that at an E3 press conference?

We recognize that E3 is a very long, and very tiring gauntlet of work. Many words are written in a short period of time, and it’s all intermixed with the frantic rush to get to the next appointment, see the next unreleased game, and indulge in the next gloriously, evilly open bar. As writers and editors, we bend easily with the surprises that the show serves up. Sometimes though… it’s just too much.

E3 2013 broke our dear, beloved Anthony Agnello (pictured on the right, and forever after in your soul). Not in a going-fetal-and-crying-until-committed sort of way. No no, that would have been a blessed relief. Anthony didn’t just break, he malfunctioned. There was a short circuit in his programming, and suddenly an up-close look at Diablo III turned into a hazy reminiscence of Karen O horking beer on pre-hipster New Yorkers in the early Aughts.

Pay your respects, people. Anthony’s a trooper, and he doesn’t want your pity.

A long time ago, in an industry far, far away, someone realized that a good teaser trailer can make the difference between a financially successful piece of entertainment and a flop. It’s a lesson that has been passed on to the gaming industry. A few years back, Deep Silver was publishing titles like Prison Break: The Conspiracy and Singles: Flirt Up Your Life. Then suddenly, one incredible trailer later, Dead Island was a best-seller. There may have been a few steps between, but that’s not the point. Shut up.

A good trailer that can wow people makes all the difference, and knowing your audience helps. So when EA showed a 22-second teaser that ended with the words “Star Wars Battlefront,” people in the audience went insane. It was like The Beatles walking through 1964 London. There were undergarments everywhere. It was horrifying.

Here’s an interesting idea: Instead of having a press conference, why not lure unsuspecting journalists into a room with the promise of games to play, then lock the doors and give a 45 minute speech where you say the same types of things others said in their press conferences? But it isn’t a press conference. And no one can leave. For two hours. But hey, there were games (even though half weren’t turned on). At least there was no water, so no one was tempted to pee. So there’s that.

Sometimes you have to go big or go home. That’s a lesson that Ubisoft took to heart as it blotted out the sun with its poster for Assassin’s Creed IV: Black Flag that was so big that if it fell off the side of the LA Convention Center, it would cause an ecological disaster. Disney gave it a good go with its building-sized The Lone Ranger poster, but you couldn’t remove it and make a medium-sized building out of it like you could Ubisoft’s.

Runners-up: The Lone Ranger, The Bureau, The Hollywood Sign

Best showing by a company that wasn’t there

If Microsoft and Nintendo proved anything with their E3 showings, it’s that sometimes it’s better to have no showing at all than to have a bad one. Sony pounced on Microsoft’s every unpopular decision, while Nintendo was a step away from dropping tear gas on journalists to stop them from rioting. Valve, however, did the smart thing and just stayed home.

With all the talk of next gen consoles, PC gaming was neglected like a cat left out in the rain all night. But waiting in the wings, lurking and plotting, is Valve and its long discussed SteamBox. It would have made sense to debut it at E3 with the gaming industry all over the event, but it would have been a disaster too, outshined at every turn. Instead Valve can now take its time, then drop bombs when it’s ready. And hey, it isn’t the SteamBox 3, so there is a very good chance that it may actually be announced soon!

The Sad Panda Achievement Award – or Pandie, as we just made up and now like to call it – is an annual pity prize that hopefully comes as some consolation after an awkward, mixed-message, and yes, downright painful E3 showing (see the hostage award above for more details). This year’s Pandie goes with warm and fuzzy cuddles to Nintendo, which could probably use a hug right now.

It wasn’t that your games were bad, Nintendo. Or the widespread acceptance of the fact that your struggling Wii U console isn’t going to find an audience until you start trotting out your A-team franchises. No. It was that ridiculous morning where you assaulted us with incessant Mario chatter and grown men in plush cat ears while demo stations for all of your games – ostensibly the reason we all woke up super early on a freaking Tuesday after a long, long day of press events the day before – stood silent. In terms of showings, it wasn’t what we would call… “good.” There are only so many “It’s a-me, Mario!s” a person can take before you start seeing eyes twitch.

Seriously, what the hell happened there?

Runners-up: Nothing even comes close.