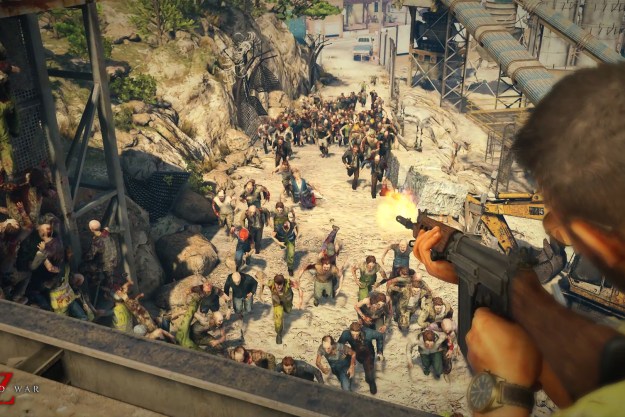 “While it stands on the shoulders of giants, World War Z does so proudly and with plenty of its own merits.”

Games have depicted zombie hordes and the survivors that kill them perhaps more than any other scenario in the medium’s history, and though plenty have failed to stand out, others have done well to chase or even reset a high bar. World War Z doesn’t raise that bar, but given its out-of-left-field ties to a dormant franchise, it’s surprising how close it comes.

Just the phrase “zombie game” can immediately instill in some players a powerful sense of fatigue given how prevalent they are. But that’s not the case for me, especially as it pertains to this exact kind of zombie game, the kind that hopes to reinvigorate a tight four-player co-op experience in the face of massive hordes like Left 4 Dead so brilliantly delivered over a decade ago. World War Z, now a year on from launch and sporting its Game of the Year Edition, is closer than ever to replicating its blatant inspiration from Valve thanks to borrowing from predecessors and building on them in some ways.

WWZ regularly takes up to four players to capitals and major cities across several continents, and no two campaigns look at all alike. The run through downtown Manhattan bears no resemblance to a wintry excursion in Moscow, to pushing to the water’s edge of Tokyo, or to the newest campaign in sun-soaked Marseille, France, among others.

This diversity in settings makes up for what the game lacks in mission variety. The tasks will be familiar to co-op shooter fans as objectives include tropes like holding out for a set amount of time or scavenging for particular items requested by NPCs. Each chapter pushes players from safe room to safe room, with swarms of common undead and special infected standing in your way. The extent to which the game pushes back with these hordes is exciting on any difficulty. But with the right team, it’s at its best when the difficulty is greater than the default. Success is determined by how well your team works together. Some of the game’s special infected are unabashedly pulled right from other zombie games, like one that pounces on you and demands a teammate come to your rescue, or another that grabs you and repeatedly slams you into the ground.

There are a half dozen special infected classes, but only one of them — a zombie that infects players and slowly drains health — hasn’t been seen in the genre before. Though levels are linear, there remains a rewarding sense of replayability thanks to encounters running unscripted, meaning when and where you encounter hordes and special infected will change with every session. You’ll explore the same locations, but never survive the same assault twice.

While it stands on the shoulders of giants like Left 4 Dead and, more recently, the Warhammer: Vermintide series, World War Z does so proudly, and with plenty of its own merits. Front and center is its swarm technology, which allows hordes of unprecedented size and speed to descend upon players. These swarms spill over rooftops haphazardly and pile up to create slimy pyramids of flesh, often in several locations at once, forcing players into a frantic fight to maintain some sense of control over a desperate situation. Countless zombie games try to deliver high tension in a battle against overwhelming odds, but I haven’t found any that provide the adrenaline rush of World War Z‘s high points.

In Marseille, new objectives demand more teamwork, like a missile launch sequence that requires all four players to operate the weapon to survive. This sort of cooperation can get annoying when playing with random players online who may not pay attention beyond the game’s point-and-shoot elements, but so long as you have competent allies, the new campaign is now the best part about the game. It adds an extra layer to the usual fare of staying upright longer than the wave of monsters heading your way.

There’s also a depth of weaponry and character classes not often seen in the genre. Characters may have personality, but they run, shoot, heal, and everything else with equal ability. Who they are is a cosmetic detail at best. In World War Z, players build their heroes from the ground up with a deep skill tree and a regular stream of unlocked weapons and mods. There are several classes, such as healers, demolitions, tanks, and more, and a cohesive team can play off each other’s strengths and shield weaknesses.

Skill trees aren’t new to games, but they feel fresh in this genre and make it, so any future attempts to further push the style forward will need to use these features as a foundation. They feel like the missing ingredient to games that have come before it which rarely offered anything like this, and the few examples that did – Vermintide comes to mind – didn’t do it as deeply. I’ve put countless hours into World War Z and haven’t yet maxed out all the class skill trees.

While it stands on the shoulders of giants, World War Z does so proudly and with plenty of its own merits.

There are Challenge and Horde modes, both of which were added as post-launch additions. Challenge mode cycles through gameplay modifiers like scarcer ammo or demanding players embark on solo, high-difficulty levels. These are hit or miss as the modifiers can remove some of the game’s best features, like the cooperative play. Horde mode is a relentless wave-defense mode. However, this one-note thrill is made worse without any valleys offsetting its constant peak.  These are fleetingly fun options that don’t have the staying power of the campaigns.

Still, the game’s suite of PvP modes is by far its most misguided addition. If you’ve played any small-team PvP over the past decade, you’ve already experienced most of what World War Z offers in PvP gameplay. The one interesting wrinkle, which isn’t unique but is at least rare, is how A.I. zombies roam the multiplayer maps while two human-controlled teams fight round after round.

It’s an admirable attempt for the developer to include deathmatch and other commonplace modes with the added element of undead A.I. roaming the maps. Still, World War Z just doesn’t have the community or staying power to merit time in PvP. Modes like deathmatch and free-for-all are ubiquitous and better designed in most other games that feature them. In World War Z, the PvP maps never seem as finely detailed, and instead feel more like sections of the campaigns were swiftly annexed and called PvP.

The best thing I can say about these modes is they feel dated in such a way that may be nostalgic for some players yearning for the games of a decade ago that shoehorned in PvP. It’s a curious inclusion in 2020 and not one I will look to revisit despite continuing to play the game for a long time. It feels like an afterthought for the game to include it at all, and so it’s easy to treat it as one.

Each atmospheric level uses environmental storytelling, like the former military checkpoint overrun with bodies or a mall crawling with undead like a Romero movie. All of this is aided by a level of fidelity I didn’t expect since licensed games aren’t often so polished. The world and its characters look great, though texture pop-in sometimes disrupts an otherwise captivating vista.

Sound design in this genre is meant to be instructive, but World War Z often yells over its own attempts to do so. Special infected arrivals are introduced by their signature groans and chimes, but the game is usually too noisy from hordes and its admittedly gripping soundtrack to be effective. This hinders any element of strategy and does so in a way that implies the developers at Saber Interactive understood the importance but still managed to drown out their own intentions. Missed brushstrokes like these keep World War Z  from being a masterpiece.

The last year has been kind to the game, as the developers regularly added new modes, characters, cosmetics, and weapons. There’s an entire PvP suite that can be ignored, and the game overall borrows liberally from predecessors, but it manages to build on some genre tropes too. In trying to capture the essence of its idols, World War Z reveals a road map for successors to draw from when trying to deliver a memorable co-op zombie apocalypse.

Left 4 Dead 2 is still the greatest the genre has ever given us, but as far as co-op zombie shooters go, World War Z is the best attempt at modernizing that classic. If you want a fantasy take, I recommend Warhammer: Vermintide 2, while Payday puts a bank heist spin on the formula. The recent Zombie Army 4 is decent too, but World War Z is better. It falls short of its idols in some ways, but it innovates in others.

Given the nature of its highly replayable multiplayer modes, World War Z goes on for as long as you’d like it to. I would recommend focusing your playtime on the campaigns rather than PvP, but the depth of upgrades to unlock makes it an enticing long-play game.

You should, especially if you’re a fan of the genre. While the game stumbles in some ways, namely a forgettable PvP suite and an audio mix that trips on itself, the slate of aesthetically diverse and intense campaigns in World War Z make it a great game to play with friends. Given all the ways in which it revives and sometimes even re-imagines what a co-op shooter like this can be, World War Z is worth buying.

Back 4 Blood Swarm guide: Tips for playing PvP as Ridden or the Cleaners

How to add cross-platform friends in Back 4 Blood