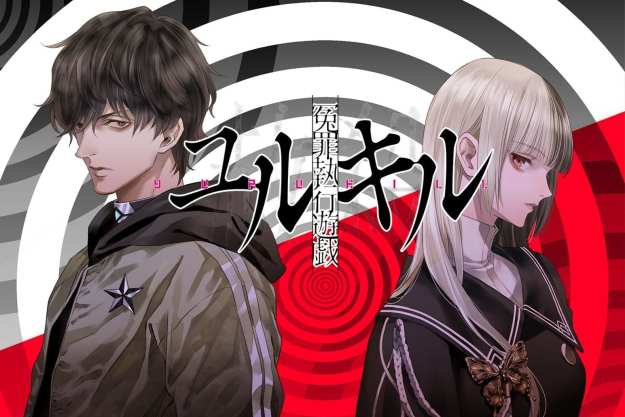 “Yurukill: The Calumniation Games can't quite find the right narrative justification for its intriguing gameplay hooks.”

Yurukill: The Calumniation Games tries to mesh two incredibly niche genres together: visual novel and shoot ‘em up (shmup). By incorporating both, developer Izanagi Games risks narrowing the game’s audience down even further. Half of the game consists of reading through mounds of dialogue between characters to get through the story along with some light puzzle solving. The other half has players commandeering a battleship in classic shmup sections and taking down grotesque enemies.

The result is a strange mix of different gameplay styles that feel fresh but disjointed. Yurukill: The Calumniation has engaging gameplay mechanics during the spur of the moment, but it’s missing a narrative justification that ties them all together.

The game follows two protagonists: Sengoku Shunju and Rina Azami. They’re both participating in the Yurukill Games, where the winner will get acquitted of their crimes. The catch here is that both Sengoku and Rina are partners, with the former being the Prisoner and the latter being the Executioner.

The Prisoner is accused of committing a crime, while the Executioner acts as a judge to decide the Prisoner’s ultimate fate. Sengoku insists that he’s been falsely accused, but it’s Rina who wields the button to either pardon him for his actions or kill him by releasing poison into his neck from his collar. This setup invites some biting and razor-sharp tension between the two throughout the game, as Sengoku constantly needs to affirm his innocence, lest Rina executes him.

There are several other duos in the game who are in the same dynamic, with each Prisoner being accused of a different crime. The groups are called the Crafty Killers, Sly Stalkers, Death Dealing Duo, and Peeping Toms. Sengoku and Rina are known as the Mass Murderers. Fortunately, each chapter switches points of view for every team. That way you spend ample time between all of the characters and you get a holistic perspective of each of them.

All of the groups are sent to different attractions across Yurukill Land and have to solve a dungeon based on the crime that the particular Prisoner committed. In these dungeons, you’ll have to gather evidence in a first-person perspective, similar to a point-and-click game. These dungeons recall the events that led the Prisoner to be sent to jail and eventually join the Yurukill Games. You’ll also learn about each character’s backstories and how the Prisoners and Executioners are connected. Each dungeon is nicely paced and doesn’t linger past its welcome.

Are you smarter than a 5th grader?

The main issue with the dungeons is that the puzzles within them are easy to the point of almost being insulting. To give you an idea of how simple they are, one of them had me solve a simple math equation using the order of operations.

While I appreciate that the puzzles are straightforward and not obtuse like those in similar games like the Zero Escape series, the brainteasers in Yurukill swing too hard in the opposite direction. The sense of urgency and dread of a character’s life hanging in the balance kind of dissipates when a puzzle’s solution is literally just lining up colors of the rainbow in the ROYGBIV order.

After clearing a dungeon, you’ll be placed in a shoot-em-up section against your Executioner — it helps mix up the gameplay experience from being a pure visual novel. You’ll shoot down waves of incoming enemies and gain power-ups along the way, and then take down the final boss at the end of the level.

One thing that helps set these sections apart from dedicated shmup games is that when defeating a stage, you’ll sometimes be thrust into a mini-game where you have to present evidence to refute an executioner’s claim. Other than that, the gameplay is a little basic but it was fun enough to keep my attention.

It feels like those sections are solely there just for the sake of having traditional game elements.

However, the way Yurukill’s story tries to justify these shmup sections is flimsy. There’s a tonal mismatch with having the characters experience trauma by going through recreations of gruesome crime scenes, and then immediately having to put on virtual reality helmets to play a shooter. It feels like those sections are solely there just for the sake of having traditional game elements. The music is great, though. The electric guitar riffing through the boss theme really amps up the excitement of closing out these sections.

Imitation is a form of flattery

Throughout Yurukill, I couldn’t help but think about how similar it was to another one of NIS America’s published games, Danganronpa. They both have the death game premise and Yurukill also has anime portrait cutouts for its characters that appear during decisive story moments just like the Danganronpa series does.

The Yurukill Games even has its own Monokuma-like spectator character, a girl in a kitsune mask named Binko. However, Yurukill’s art style is distinctive as it goes for a more realistic anime look compared to Danganronpa’s cartoon aesthetic — the character designs are more akin to Zero Time Dilemma.

Unfortunately, at least in the Nintendo Switch version, Yurukill does suffer from performance issues. In visual novel games, you can typically pull up a recent dialogue history without any friction. However, there’s an annoying pause hitch that brings up the loading symbol when pulling up past dialogue. Other visual novel games, including the recently released AI: The Somnium Files – Nirvana Initiative, don’t typically have this problem and load instantly, so it’s a noticeable annoyance.

Yurukill has cool concepts, but it’s not nearly as polished and optimized as some of the titles it’s inspired by.

There’s also some slowdown during the shooter sections if there are too many enemy attacks or effects on-screen. During the final boss fight, I ran into a progress block where the text on the screen wouldn’t advance. After trying several solutions such as restarting the game, I was eventually able to bypass the bug by changing my game’s text language from English to another one and then switching back.

Yurukill has cool concepts, but it’s not nearly as polished and optimized as some of the titles it’s inspired by. The pause hitching when trying to pull up past dialogue impedes the game’s narrative flow. The frame rate dips and stutters that can occur when there’s too much going on in the shmup sections can cause you to accidentally run into an enemy’s attack and lose a life.

Yurukill: The Calumniation Games is a valiant effort to merge together two niche genres but it feels a bit underwhelming. The premise of the titular Yurukill Games is interesting and the characters have compelling backstories but there needs to be more meat and narrative justifications for the shoot-em-up gameplay sections. Without spoiling anything, the game’s ending is indeed sequel bait. If this game’s shortcomings can be addressed in a follow-up, there’s definitely potential here.

The Danganronpa and Zero Escape franchises are better visual novel experiences with more complex stories and engaging puzzles. Games like Ikaruga and Sine Mora are better shoot-em-ups as they are entirely dedicated to that genre’s mechanics.

The game will take about 12 hours on the easiest difficulty but may take a bit longer if you choose normal or hard (hell) difficulty for the shoot-em-up sections. There’s also a Score Attack mode, so you can compete for high scores online on leaderboards.

Yes, but maybe wait for a price drop. If you like both genres or are a fan of niche Japanese games in general, then Yurukill might be for you. It’s a unique game, but there are definite improvements to be made.

Yurukill: The Calumniation Games was reviewed on Nintendo Switch.

Topics
Every video game delay that has happened in 2023 so far
Best Gaming PC Deals: Save on RTX 3070, 3080, 3090 PCs
Fire Emblem Engage bond levels: how to get max Bond Levels fast
Fortnite: How to collect Dragon Balls on Adventure Island
The best video game remakes reinvent the classics, they don’t just revisit them
Best Buy will give you a $10 to pre-order Hogwarts Legacy today
Save $620 on this Lenovo gaming laptop with an RTX 3070
AMD vs. Intel: which wins in 2023?
Forspoken settings: change these settings for a better experience
Add 2TB of storage to your PS5 with an SSD and save $70 with this deal
Fall Out Boy concert in Fortnite: start time, island code, and more
Marvel Snap is dangerously close to becoming a pay-to-win game
All missable characters in Fire Emblem Engage and how to get them