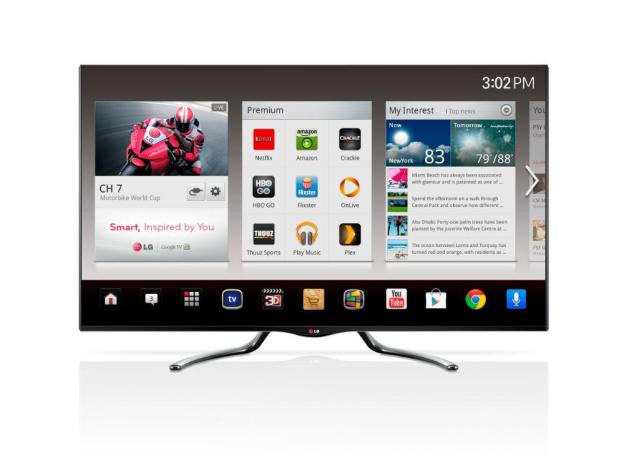 The Google I/O Keynote address has come and gone with no mention of Google TV or the Nexus Q. LG, on the other hand, has Google TV news at the ready.

LG Smart TVs that run Google TV will be updated to Android 4.2.2 Jelly Bean, currently the latest version of the operating system, the company announced today at Google I/O in San Francisco.

The free over-the-air update will go live in the U.S. in the third quarter this year, so the earliest consumers would receive it is July. LG added that the boost in performance due to Jelly Bean will also be augmented by the Android Native Development Kit (NDK) aimed at developers. Smartphone apps using the NDK will reportedly run on LG’s Google TV platform with no major modifications or ports, which means that Android games can be played on the TV with little adjustment.

In addition, the kit will enable developers to create apps or versions of apps meant exclusively for the Smart TV and Android, opening up the possibility of cross-functionality between the TV and mobile devices. LG appears to want to aggressively pursue developers and get as many apps and games on their Smart TVs and Google TV as they can.

Games may also be able to tap into LG’s own “3D Game Changer” feature that converts 2D games into an enhanced 3D mode, something the company claims was only available in movies filmed with 3D equipment. It’s not clear if Smart TVs with 3D built-in will also include the ability to play Android games head-to-head with each player’s vantage point in full screen, as has been seen before with console games.

There will also be unique remote control options to better interact with what the Jelly Bean-infused Google TV will offer. Along with the Magic Remote with QWERTY, LG’s dual-sided remote featuring a full keyboard in the back, there will also be an app that can offer the same type of functionality on any Android smartphone or tablet, turning it into a two-handed gamepad with touch controls. The idea is to make “more complex” games like sports and racing simulations easier to play.

This would mark the first time that the latest version of Android will be the basis of Google TV, though it’s been rumored that Key Lime Pie, the next big Android version, will be released as early as the summer. Neither LG nor Google have confirmed that Google TV will be part of the Android rollouts typically seen in smartphones and tablets.

Video-editing app LumaFusion to get a Galaxy Tab S8 launch
Best streaming devices for 2022: Apple TV, Roku, and more
Apple TV 4K (2017) vs. Apple TV 4K (2021): Should you upgrade?
What is Google TV? Here’s everything you need to know
What is the Samsung Smart TV web browser?
Ar $25K, LG’s 97-inch G2 OLED is actually a bargain
The best horror movies based on true crimes
The best horror movies with killer kids
I desperately crave LG’s flexible OLED TV. Here’s why I won’t buy it
How to share an Apple TV+ subscription with your family
Prime Day TV Deals: What to expect from the October sale
How to connect AirPods to a Chromebook
ESPN, other Disney channels are back on Sling TV after contract dispute