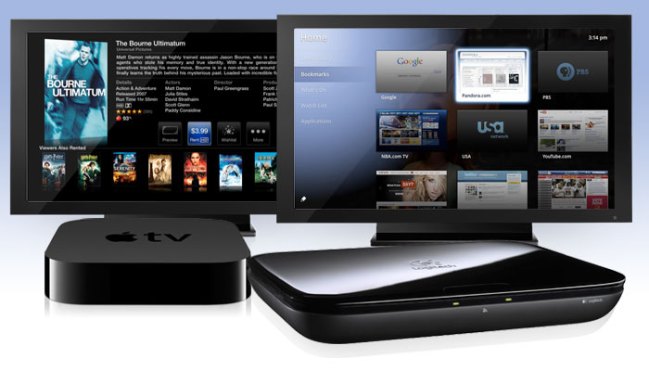 The surging interest set-top media boxes such as Roku, Apple TV and the Boxee Box is starting to look a lot like the sudden buzz around tablets: Microsoft was puttering around with the same concepts ages ago, but nobody really cared. Now that Apple and Google have focused their laser-like engineering teams on the problem, years of antiquated GUI design are searing off in months as both companies work their magic on the long-neglected “ten-foot interface.”

While Apple TV has kicked around in various iterations since 2007 and Google TV hasn’t even hit the market officially, enquiring TV addicts want to know: Which will you be kicking back and watching this fall? In truth, despite the similar names and cutthroat competitors, they’re two different beasts entirely. Here’s how Google TV is different from Apple TV.

Apple TV is one box, Google TV is an ecosystem.

Google and Apple have both carried their smartphone strategies directly over to the television: Apple won’t let anybody else touch its proprietary Apple TV interface, and Google wants to staple Google TV onto as many boxes as it can. Google TV will be built right in to new TVs from Sony, available on separate set-top boxes from Logitech, and those are just launch partners, with many more to come. Just as it does with smartphones, this rainbow of vendors will translate to more choice for Google TV users, while Apple TV users have one box to do it all. Need composite video outputs, 1080p decoding or some other, yet unknown feature on Apple TV? Tough luck, wait for next year. Need it on Google TV? Just wait for some manufacturer to pump out a deluxe box.

Apple recently redesigned the Apple TV to run on the same A4 processor powering the iPhone and iPad. Essentially, it’s a smartphone, without a screen, in a box. While that will make it a quiet, ultra-efficient power miser, it doesn’t leave much headroom for upgrades, either. By contrast, Google TV will run on Intel’s Atom processor – the same chip powering virtually every netbook on the market. Besides giving it the additional horsepower to pump up full 1080p video, rather than 720p as the Apple TV caps out at, it should leave room for additional upgrades, and maybe even the possibility of hacking hardware to run other desktop software. MythTV or Boxee, anyone?

Apple TV acts as a storefront.

Apple makes a killing off of iTunes. Conveniently, Apple TV conveniently plants a storefront for iTunes in the middle of your living room, allowing you to buy Apple content from Apple. Besides the existing option to purchase both TV shows and movies through iTunes, Apple has also introduced 99-cent TV show rentals with the latest iteration. Google, meanwhile, has said nothing of opening a store for content. Every source will either come for free through the Web, from a cable box, or third-party providers. This might make the selection of popular shows smaller out of the box, but we wouldn’t be surprised to see providers like Amazon on Demand, Vudu and Hulu Plus lining up to hop aboard Google TV, broadening its appeal past what Apple alone can deliver.

Google TV has a Web browser.

Ironically, Apple TV lacks the holy grail of expandability that rocketed the iPhone to success, while Google managed to cram it in. Google TV runs on Android, and it will run Android apps. Details remain somewhat scarce on Google TV’s app support, but Google claims that existing Android apps should eventually be able to run on Google TV, as long as they don’t use smartphone-only features (a labyrinth game that relies on tilt sensors, for instance, wouldn’t make much sense on your TV). More importantly, developers will be able to code Google TV specific apps after an SDK comes out, so anything a developer dreams up should – theoretically – become possible.

Sure, we cut the cable and never looked back a long time ago. But the fact remains: Many casual TV watchers remain roped into existing cable service, and there are buckets of content that come through cable still unavailable from the Web. Google TV solves the issue by integrating with cable boxes and essentially acting as a DVR. Sure, you can watch back episodes of The Office online, but if you want to watch the latest one an hour after it airs on Thursday at nine o’clock, you can do that too.

Apple TV and Google TV will both pull the same trick that even the most basic media streamers have pulled off for years now – playing music, video and photos across a home network. Where they diverge the is on the extras.

Google TV attempts to pop an umbrella over every single source of content you might ever want to plaster across a 42-inch screen. Web browsing? Check. Cable TV? Check. Apps? Check.

Apple TV attempts to sell you content from Apple. And hey, you can watch Netflix this year, too.

Even without full specs or hands on experience with Google TV, it’s obviously entering the market as the better-equipped contender. But the details lie in execution. Devious as Apple’s storefront approach sounds, Apple has proven to make this closed shopping experience feel cozy and convenient in the past, and we wouldn’t surprised to see the ease of use combined with a $99 price point sell the more capable Google TV under the table. Google’s ambitious approach to interconnectivity with cable boxes and other hardware could also cause setup nightmares that negate all of its potential capabilities. After all – a home theater PC can already do pretty much everything Google TV will – but how many people do you know with computers under their TV sets?

Apple has already launched the latest version of Apple TV, and Google TV should be appearing later this month. May the best media center win.