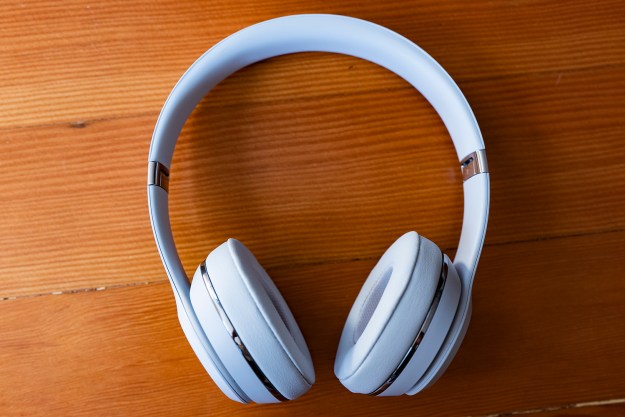 “Focused on style and compatibility, the asking price of the Beats Solo3 is a bit high for only average sound.”

Beats has been as much about brand and style as it has about sound quality and features, so it’s no surprise that all of its on-ear/over-ear options seem to boast more color choices than upfront audio specs.

The Beats Solo3 are the company’s most approachable headphones when it comes to price, but that doesn’t make them cheap. At $200, they are still reaching into the high-end personal audio market despite their lower-end status among Beats options. So in what has become a very competitive headphone market in the last couple of years, where do the Solo3 land? Let’s take a look.

The Beats Solo3 ship pretty simply. Inside a couple of layers of cardboard packaging, you will find the headphones, a soft carrying case, a USB-A to USB Micro-B charging cable, and a small carabiner (used for looping onto the soft case and clipping to things, I guess). Beats also includes a set of pamphlets that clearly explain setup and use, as well as a sticker, if that’s your jam. Though the headphones do accept a 3.5mm jack connection that bypasses the need for power, the Solo3 headphones do not ship with one. For the price, I would think including such a simple cable would be a no-brainer, but that’s Apple for you.

I will say that the packaging was devoid of excess plastic, meaning you can likely recycle most of it easily pretty much everywhere, which is nice; we’ll award points for sustainability here.

The color of the set Beats sent to me for review is Satin Silver, which is basically white. They are straightforward and clean-looking, but in my opinion they’re the least interesting of the options other than perhaps the Matte Black. As far as style is concerned, Beats has it nailed across the board with its headphones, as some of the other options look fantastic.

The build quality is solid, too. The hinges are made of polished chrome, the earcups are well-padded, and though the exterior of the cans is plastic, the headphones don’t feel cheap. The headband isn’t particularly robust, but the lightness of the Solo3s mixed with the strength of the clamping pressure on the ears lets me give that a pass.

Speaking of that clamping pressure, it’s significant. The Solo3 headphones are the on-ear variety, not over-ear. As such, the cups rest directly on your ears and push them into the sides of your head when worn. I don’t have a particularly large head, and it is narrower than it is round. Even so, the earcups press pretty hard against my ears to the point that the Solo3s become uncomfortable to wear even after a short while. I’ve been able to wear them for at most an hour before significant fatigue sets in. In short, these headphones wear very small, so if you have a larger head, it’s highly likely these are going to be even more uncomfortable on you than they are on me.

The Solo3 weigh just 215 grams, which is well-distributed and makes carrying or wearing them easy. I mentioned the headband did not feel that robust, and that’s because the padding across the band that rests on the top of my head isn’t very soft. It didn’t bother me in particular, but the Beats Solo Pros and Studios have a much more cushioned headband, so seeing less cushion here was disappointing.

The soft case that ships with the Solo3 is nothing special. You can use that included carabiner to clip it to the inside or the exterior of a bag if you desire. The case is quite compact, which is a plus, but it’s just not going to win any design awards for its looks.

The right earcup houses a micro USB charging port, as well as the power button. The left earcup has a 3.5mm jack input on the bottom and the side of the cup has a button to pause, play, and skip tracks, as well as a pair of buttons to control volume. I like the physical buttons on the Solo3s as opposed to a touchpad found on other headphones because the tactile feedback helps me know that I am using the controls correctly when wearing the headphones (since I can’t see what I’m pressing).

As an Apple brand, the Beats headphones are going to have the best user experience with an iPhone, but they are fully compatible with Android devices as well. The Solo3s feature Apple’s W1 chip, which allows for added functionality when used with Apple products, including “Hey Siri” support and multiple headset listening (when using other Beats or Apple products). The headphones and their remaining battery life will also be displayed when held close to the iPhone.

As an iPhone user, the Beats Solo3 headphones slipped right into my wearable library with ease.

As an iPhone user, the Beats Solo3 headphones slipped right into my wearable library with ease, just like when I added the AirPods Pros and my Apple Watch. Pairing was quick and easy, and jumping to additional sources was fast, even though these do not support Bluetooth multipoint. When Apple releases its automatic hand-off of headphones with the next OS, I hope using the Solo3s on multiple Apple products will get even easier.

The battery life on the Solo3 headphones is very good.

The battery life on the Solo3 headphones is very good: 40 hours between charges. They even offer a quick charge of 10 minutes for 3 hours of listening. This is some of the best battery performance you can ask for in any headphone on the market right now, and would be the best if it wasn’t for the Jabra Elite 45H that were recently released and offer 50 hours.

Beats has done an excellent job making the audio on these headphones have the broadest possible appeal. For an audiophile, these are as close to par as I can imagine. For the average listener, though, they are inoffensive.

It’s a perfect line for a brand like Beats to ride.

The audio out of the Solo3 headphones is mids-driven, with the higher registers, as well as the lows and bass, given less of a role. That’s not to say the bass isn’t there — it is. The Solo3 headphones just don’t really pump the bass like I sometimes enjoy, or seem to have the ability to present it with any depth.

The soundstage is particularly narrow, with the ranges compressed together into what feels like a small room. On Sia’s Chandelier, the bass sounds overprocessed and muddy, but her vocals come through well enough. Similarly, Hans Zimmer’s No Time for Caution doesn’t have the “oomph” it should and fails to ramp the drama high enough for my liking due to a weak bass signal. As the piece crescendos, the bass gets a bit warbly and unrefined, again making me believe these headphones just aren’t capable of outputting clear bass when a song demands it.

These headphones just aren’t capable of outputting clear bass when a song demands it.

The fact that the bass isn’t strong on the Solo3 is confusing, as a punchy bass is pretty much a big part Beats’ signature sound. Maybe it’s a good thing that these offer a break from what is normally stronger oomph in the lows, or maybe it would be disappointing if you bought these and expected that same Beats sound.

Beats does not offer any way to tweak the EQ either, so what you hear is what you get out of the Solo3 headphones.

Unless you’re really looking for powerful bass that will rock your jaw, the audio is easy to listen to and generally pleasant. It’s that mids-driven audio that is just so darned easy to listen to. Warm and approachable, most people will like it just fine.

The Beats Solo3 Headphones rely heavily on their style and Apple connectivity over audio quality in order to drive their high $200 asking price. For many, that will be worth it. But it’s a very competitive market, and Beats might have a hard time convincing the well-informed that these cans are the ones to get.

At $200, the Know Calm or the Razer Opus are both solid options. The Microsoft Surface Headphones 2 are also in this price range and worth your consideration. If you want to spend less, the Jabra Elite 45H are half the price but sound much better, though they lack the firm grip the Solo3 provide. In all four cases, you might have to sacrifice style and compatibility, but you’ll get better sound. It comes down to your preference.

With Micro-USB on its way out, it might be annoying to have to keep that extra cable around when the rest of your tech is on to USB-C, especially if you’re using Apple products and already toting around a Lighting cable. Beats products are covered by Apple’s 1-year limited warranty, and the build quality is solid.

Maybe. The thing is, they’re expensive for what is average audio performance, but they look good and the compatibility with Apple products is nice and hard to overlook. You’re going to have to balance what’s important to you and determine if the Beats Solo3 headphones fulfill that need.

Topics
Best 65-inch TV deals: Save on QLED and OLED for Super Bowl
The best wireless earbuds for 2023
McIntosh’s new $8,000 AVR: gigantic power, with a Dolby Atmos catch
Rode’s NTH-100M headphones are built for gamers
Go big or go home: this 85-inch Samsung 4K TV is $300 off
The best shows on Disney+ right now (February 2023)
The best outdoor TV antennas for 2023
This 75-inch Samsung 4K TV is $120 off, delivered by the Super Bowl
Netflix screwed up, but that doesn’t mean it’s wrong
A rare Disney Plus deal just started — get it while you can
LG brings Apple TV, Apple Music, and AirPlay to webOS Hub-based TVs
This Super Bowl deal knocks $2500 off Samsung’s QN800B 8K TV
The best family movies on Netflix right now