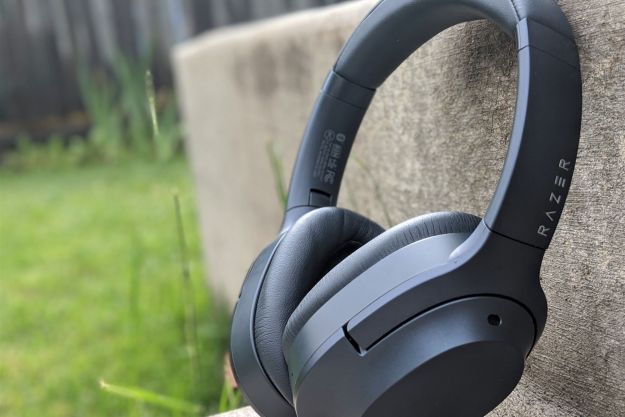 Razer has steadily become a household name in the gaming world, with headphones and other products centered around complementing that experience.  It has not, however, ventured into the realm of lifestyle audio.

That changes now, with the company’s release of the Razer Opus wireless headphones. At $200, the Opus boasts a surprisingly full lineup of features for their price, including active noise cancellation and THX-certified audio quality. To determine if the Razer Opus can live up to its spec sheet, I looked past the page and put these new headphones through the proper paces.

It may not seem like the most paramount part of a pair of headphones, but the packaging is your first experience with a new product. In other words, it’s crucial to dress appropriately for the occasion.

The Razer Opus isn’t wearing a three-piece suit, but it does come adorned in a sharp collared shirt, and that’s more than fine by me. Beneath the lid of the box is a rounded carrying case with the headphones, USB-C charging cable, 3.5mm analog cable, USB-A to USB-C adapter, and airline headphone adapter placed carefully inside.

Setup of the Razer Opus follows the regular pairing protocol – turn the headphones on, and they will respond by automatically entering Bluetooth pairing mode. You then need to find the cans in your device’s Bluetooth settings and complete the connection.

I’ll preface this critique by saying this: I haven’t had any specific issues with my connection to the Razer Opus, and the range of these headphones is adequate. Sadly, the Opus only supports Bluetooth 4.2, as opposed to the more advanced Bluetooth 5 technology. I know a few cost-saving measures may have had to be taken to make these headphones what they are, but having the latest Bluetooth technology seems like it should have been a priority.

The Razer Opus may be positioned to be closer to the budget side of headphones, but their design emits a premium presence. They’re a sleek midnight blue – a black version will follow later — with Razer logos on each side of the headband and a THX logo on each earcup. Razer is excited about that THX certification if you haven’t noticed yet.

Both the earcups and headband feature a plush leatherette foam that creates a comfort I thought held up quite nicely over longer periods of listening. The headphones implement a circumaural design, meaning the earcups fit around the ear, and weigh 265 grams. They’re not overly heavy, nor incredibly light, but they do distribute the weight of the product well.

The Opus don’t have a wide array of buttons, and that’s a good thing. There’s a power button and a button for operating active noise cancellation features on the left earcup, and volume/action buttons on the right earcup. Basically, it’s got the needed buttons to effectively control your listening experience, and not a button more.

The including carrying case feels sturdy and plenty capable of protecting the headphones when they’re not in use. I can’t help but feel they resemble an old (classic?) CD carrying case, though that tells more about my age than the design quality of this case.

Most of the Razer Opus’ key features are audio-focused, so I’ll address things like THX certification and active noise cancellation later in this review. But that doesn’t mean we don’t have a few things to discuss in the meantime.

Battery life, for instance, is an interesting area. A month or two ago, I may have been enthralled with the battery life the Opus offers for their price point – up to 25 hours of playback with ANC on. That’s better battery than the recently released Microsoft Surface Headphones 2, for $50 less.

But the fact is, we’re dealing with an ever-changing ecosystem of wireless audio products. In terms of battery life, Sony beat Razer to the punch with its recent release of the WH-CH710N. Those headphones, which are priced nearly identically to the Opus, offer 35 hours of playback with noise canceling on and 45 hours without.

From my experience, Razer’s estimated battery power held up as expected. For most people, 25 hours of playback at a time will be more than sufficient, but there are better values out there for the price.

The Opus have an auto pause/auto play feature that pauses and resumes audio when removing or replacing the headphones, which is always a subtle but appreciated feature. If this isn’t a preferred feature, though, you can turn it off in the accompanying Razer Opus app (available on both iOS and Android). You can also adjust the headphones’ auto-shutoff feature and access an equalizer to tune the sound to your liking.

There’s a reason the folks at Razer are proud of the Opus’ THX certification, and it’s warranted. Razer’s design team told me that if they were going to make a pair of lifestyle headphones, they wanted to do it right, which meant doing everything they could to craft an enjoyable listening experience — and that started with THX.

The Opus passed the three-step THX certification process with help from 40mm drivers, a frequency response range of 20-20,000 Hz, and support for audio codecs like AAC and aptX. That’s all good and well, though specs don’t always translate well. So how do these headphones sound?

In two words, strikingly accurate. Razer created a Spotify playlist designed to test the audio quality of the Opus consisting of a diverse mix of music. Tracy Chapman’s Fast Car showcased the cans’ vocal clarity, whereas the drivers in the Opus didn’t miss a beat with a tight bass track like Billie Eilish’s Bad Guy. And if you’re in the mood for a real adventure for your ears, try Alma Brasileira by Heitor-Villa-Lobos and Yo-Yo Ma. No need to thank me.

For the cost, I think these headphones will produce great sound quality for most people. They won’t beat out the Sony WH-1000XM3s and Sennheiser Momentum 3s of the world, but they get impressively close to that upper echelon.

The Razer Opus have a lot going on regarding noise cancellation. First, they offer passive noise isolation with those plush foam earcups, which do a commendable job of blocking out noise in their own right.

Then there’s the Opus’ active noise cancellation, which utilizes a hybrid design consisting of two external and two internal mics on each earcup. The thought process here is to combat a wider frequency range of unwanted sound on multiple fronts, with the external mics picking up outside frequencies like human speech or traffic, and the internal mics analyzing and optimizing the sound that gets through to your ears.

As I’ve noted in my last few reviews – and likely for my next few, too – testing ANC with public travel hasn’t really been an option. Razer does provide a YouTube video that cycles through these kinds of noises, however, with instructions to play the sounds over a 5.1 system and toggle between the different ANC modes to evaluate the cancellation.

My evaluation is in, and I’m in awe. These are not the best noise-canceling headphones — the Sony WH-1000XM3 remain the cans to beat in that category. The Opus, though, have remarkably effective active noise cancellation at a price that makes them a tantalizing value.

If I had a complaint with the Opus’ ANC features, it’s the headphones’ Ambient Awareness feature. It’s not the actual function, which is effective in piping in outside noise, but rather that Razer’s method of turning the feature on involves pressing and holding the ANC button for the duration of using it, something that could be cumbersome the longer you need to hear outside sounds.

The Razer Opus are not without their shortcomings — but they’re minor, and the affordable audio quality and active noise cancellation featured in these headphones far outweigh those issues.

The Sony WH-CH710N come with a $199 price tag, better battery life, and more advanced Bluetooth technology, though I’d opt for the Opus when it comes to sound quality and ANC.  The Microsoft Surface Headphones 2 are another option with great sound and solid ANC, but they’ve got inferior battery life at $250.

With a two-year limited warranty, Razer seems poised to stand by its new product. Its Bluetooth support is something of a concern, but expect the headphones themselves to last.

Yes. Razer made an affordable set of headphones with great sound and stellar active noise cancellation, all while limiting its shortcomings. All told, the Opus wireless headphones are a value that won’t disappoint.

Topics
Sony’s 2023 AV receivers are Sonos-ready and work with wireless speakers
Netflix expands its spatial audio, number of devices that can download content
Best 75-inch TV deals: Get a large screen for the Super Bowl
Peacock does away with free tier for new subscribers
Marshall’s latest Bluetooth speaker has four drivers for 360 sound
Showtime is being merged into Paramount+
Sling is now 50% off — stream live sports without cable
Klipsch follows the success of The Fives with The Sevens and Nines powered speakers
Everything leaving Hulu in February 2023
Is there a Sling TV free trial? Here’s what you need to know
What’s new on Apple TV+ this month (February 2023)
YouTube TV loses MLB Network and MLB.TV add-on
YouTube TV: plans, pricing, channels, how to cancel, and more