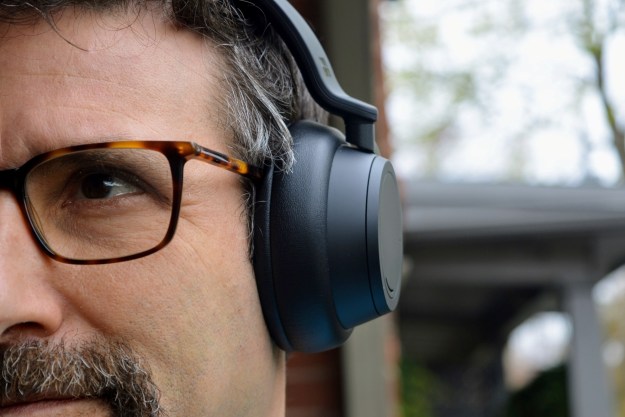 “The Surface Headphones 2 use all-day comfort and intuitive controls to stand out from the crowd.”

Microsoft’s original Surface Headphones were surprisingly good considering the company had never made noise-canceling headphones before. They brought solid noise-canceling, respectable sound quality, and were very comfortable. Plus, their intuitive controls were top-notch.

Yet they were held back by poor battery life, a lack of high-quality Bluetooth codecs, and no real way to tweak settings like EQ. They were also expensive. At $350, they went toe-to-toe with Sony’s insanely good WH-1000XM3. Microsoft had little hope of winning the fight for the best noise-canceling headphones.

Now at a lower price

Starting a headphone review by talking about money might seem odd, but in this case, it’s justified. The single biggest change Microsoft made to the Surface Headphones 2 is the price. At $250, they’re $100 less than the original Surface Headphones. That makes a huge difference. They’re not just more affordable, they’re also a better value, because they pack a few extras, as well.

The new model has an identical design with the same minimalist aesthetic. The seamless headband, single-sided earcup pivot arms, and the subtle Windows logo are all carbon copies of the first generation. Thankfully, so are the extra-cushy earpads and the distinctive on-earcup dial controls for volume and active noise cancellation.

The large touchpads on each ear cup are easy to use and very responsive to taps.

At $250, they’re $100 less than the original Surface Headphones and that makes a huge difference.

One small change is the ability to freely rotate each ear cup 180-degrees, making it more comfortable to wear the Surface Headphones 2 around your neck when you’re not using them. You can also do DJ-style one-ear monitoring when using the analog cable.

In short, Microsoft made the wise decision to keep all of the physical features that helped the first generation stand out from the crowd.

Comfort still stands out the most. I wore these headphones for an entire 9-to-5 workday as I cranked on this review, and aside from sweaty ears (an inevitable consequence of closed-back headphones), I never felt a hint of discomfort. That’s remarkable.

With that said, I don’t think they’ll be the best gym companion. Stationary bikes, elliptical machines, and free weights shouldn’t be a problem, but impact-based activities like running or skipping rope may cause the headphones to move about a bit. In this case, greater comfort goes hand-in-hand with a loose fit, so the Surface Headphones 2 are better suited to long sessions at a desk than long runs around town.

A hands-free voice assistant is a big convenience — it’s one of the things I like most about products like Apple’s AirPods Pro, Google’s Pixel Buds 2, and Amazon’s Echo Buds. And though Cortana hasn’t won hearts and minds quite like Siri, Google Assistant, or Alexa, being able to talk to her without pressing a button was a cool feature of the first-gen Surface Headphones.

Sadly, Cortana has all but abandoned the second-gen Surface cans. You can still access her voice commands, but to do so you’ll need Microsoft’s apps, like Outlook Mobile. Once it’s set up (a convoluted process) you can invoke hands-free Cortana for things like reading your email. Only certain kinds of email accounts are supported, and you can only use it when you’re in the U.S.

I suspect most folks — unless they’re hardcore Office 365 devotees — will ignore this feature and simply use the device’s built-in assistant, which you can do through a long-press on either earcup’s touchpad.

In its briefing with journalists, Microsoft promoted the fact that both the Surface Headphones 2 and the new Surface Earbuds can run real-time captioning and translation within Microsoft apps like PowerPoint. It’s definitely a solid tool, but I can’t see too many business people standing up in front of a boardroom of meeting attendees while wearing a full-size set of headphones. The Surface Earbuds are a different story.

Microsoft made some gains in this department, but frankly, not as much as I would have liked. Battery life is now a claimed 20 hours with ANC turned on, which is better, but still a far cry from even a budget-priced set of ANC headphones like these Taotronics.

Five minutes of quick-charging gets you an additional hour of playtime, which is also underwhelming. Sony’s WH-1000XM3 will give you five hours after 10 minutes of charging.

The Surface Headphones 2, like their predecessors, deliver strong sound. Microsoft calls it Omnisonic sound, but you can chalk that up to marketing-speak. In practice, these headphones deliver a rich, full sound that can be extensively tweaked through the new Surface Audio app for iOS and Android (which you can also use with the first-gen Surface Headphones).

Presets for rock, jazz, classical, and pop all enhanced these genres, something that presets don’t always get right.

With its factory settings, you’ll hear a very flat response, something audio purists look for in their speakers and headphones. Highs, lows, and midranges are all nicely balanced, and bass response is just evident enough to give your favorite tracks some real presence. These cans don’t offer the same precision, clarity, and depth of soundstage that you’ll get with higher-end headphones, but given their new, lower price, it’s no longer a deal-breaker.

Jump into the app’s EQ settings and you can push that bass from benign to bombastic with one swipe. Find a combination of settings you like? You can save them with your own labels — a huge improvement from the first go-round. I found the app’s built-in presets for rock, jazz, classical, and pop all indeed enhanced these genres, something that presets don’t always get right.

Although overall sound quality is unchanged from the first version, Microsoft has added support for the aptX Bluetooth codec, which should improve sound quality when used with devices that support it. My iPhone 11 doesn’t support it, however, so I couldn’t put this to the test.

With both moderate traffic sounds and peaceful interiors, calls were clear and the noise was kept to a minimum.

As good as their sound is, I found one significant drawback. If you push volume levels to 9, 10, or 11, distortion can creep in. I noticed it first on the snare drum beats of Death Cab For Cutie’s To the Ground. A quick check of other tracks like my favorite low-end bass shaker, Boom Boom Pow by the Black Eyed Peas, confirmed that bass drums can cause the same effect.

Anything north of volume 8 is almost painfully loud, and I can’t imagine you’d want to expose yourself to those levels for very long. Still, it’s surprising Microsoft didn’t tune the Surface Headphones 2 to account for the distortion.

The Microsoft Surface Headphones 2 have excellent call quality. With both moderate traffic sounds and peaceful interiors, calls were clear and noise was kept to a minimum.

The only minor problem was the ANC function. Normally, you can use the left ear-cup dial to select between 13 levels of noise cancellation, and two passthrough modes: Normal passthrough and ambient amplification.

For calls, passthrough is ideal because it lets you hear your own voice naturally. However, during calls — and sometimes at other times — passthrough mode would switch back to the lowest ANC setting, usually accompanied by an audible click.

I reached out to Microsoft to see if the Surface team knew why this was happening, but as of publication, I have not yet heard back.

I have to say, after using many different ANC headphones, I like Microsoft’s system for noise-canceling the most. That’s not to say the Surface Headphones 2 are better at ANC than the Sony WH-1000XM3 or the Bose Noise Cancelling 700 — they aren’t. Their dial-controlled intensity, however, is awesome and intuitive.

It hasn’t changed since the first-gen cans, but it’s still worth calling out — it’s a far better way to adjust how much outside sound you want to let in than using app-based presets, which is typically how this is handled.

The ANC itself is not bad, either. There’s a very tiny amount of hiss if you’re not playing any music, and it doesn’t deliver a complete cone of silence, but it will easily reduce any loud-ish droning sounds like bathroom fans or vacuums to acceptably quiet levels.

You can usually find Jabra’s Elite 85H for around $250. With better battery life, slightly better sound quality, and water-resistance, they make an excellent alternative to the Surface Headphones 2.

However, they don’t have the Surface’s superb dial-based controls, which makes the most commonly-accessed features much easier and more enjoyable to use.

Microsoft backs the Surface Headphones 2 with a one-year warranty, which is common for headphones. Their build quality looks better than average and I think that, with a reasonable amount of care, they should last for many years.

Yes. The Surface Headphones 2’s price is their biggest improvement, and it makes what was once an overpriced product a very good value. They have less battery life than the competition, but with great sound, comfort, and ANC, plus some of the best controls of any headphones, they’ve definitely found their niche.