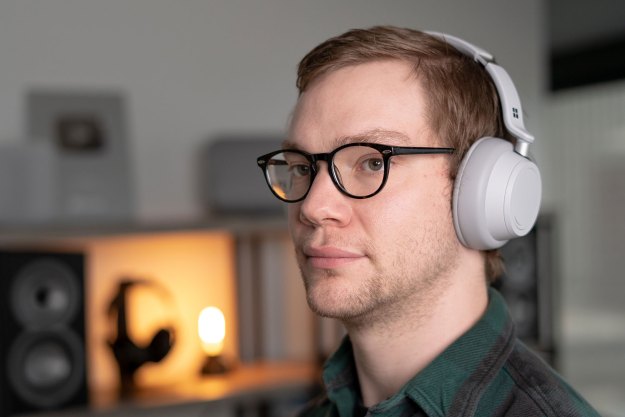 “The Surface Headphones get a lot right, but the specs don’t match the price.”

The world of premium noise-canceling headphones has never been more competitive or more crowded, populated by some of the biggest brands on Earth. With excellent offerings from Sony, Bose, Panasonic, and others, it takes a lot to break through with a new product, no matter how big the brand.

That’s the problem Microsoft faces with its Surface Headphones. Sure, Microsoft’s first wireless headphones have some undeniably cool features — great noise-canceling and astonishingly simple controls among them — but the problem is, at $350, there are simply better options out there.

The Surface Headphones do a good job breaking away from the herd in design. The sleek, grey headphones draw clean and elegant lines, with round earcups steeped in plush leather earpads, and only two physical buttons (power and microphone muting). The result is a more minimalist style than the top choices in their class, the Bose QC 35 II and Sony WH-1000xM3.

The headphones come in a grey hard case, with a pouch in the lid that houses a USB-C charging cable and 3.5 mm cable for wired listening. We appreciate the fact that those cables come tucked inside a cardboard instruction sheet in the lid of the case explaining how to use each of the touchpads on the earcups, saving you the trouble of having to dig through a manual.

Usability is at the core of Microsoft’s current design ideology, and it shows. The Surface Headphones are some of the most intuitive headphones that we’ve ever tested.

That starts with the first power up. The headphones tell you they’re in pairing mode, and even name the device to which they’re connected, saving confusion when you have them paired to multiple devices. They also tell you approximately how many hours of listening time is left, rather than battery life percentage — again, very useful information.

Some of the most intuitive headphones we’ve ever tested.

But perhaps the Surface Headphones’ most innovative feature is the unique way you control volume and noise-canceling. The headphones have a rounded dial on each earcup’s exterior, employed to physically adjust each parameter; the right side controls volume, the left controls intensity of noise-canceling. We’re in love with the simplicity and reliability with which these dials work. There’s no reaching for buttons, swiping on touchpads, or any other nonsense. Want to change volume? Turn the dial. Want to hear that airport announcement? Turn the dial. Why don’t more headphones do this?

The touchpads on the outside of each earcup are equally intuitive. First of all, both do the same things, so you don’t need to remember which side to use, only how long and how many taps you need to employ: A single tap plays or pauses your tunes, two skips songs, three plays the previous song, and a longer touch activates Microsoft’s Cortana voice assistant. If you ever actually need to use Cortana, that is.

Need to sneak in a quick conversation with your officemate or order a drink from a flight attendant? Like Sony’s 1000x M3, they will automatically play and pause music when you remove or put them back on.

Unfortunately, the actual tech specs of the headphones don’t match their intuitive usability. For starters, they only feature 15 hours of battery life — half what you’ll get from Sony’s 1000xM3 and about 5 hours less than Bose’s QC35 II. There’s also no aptX, LDAC, or AAC support for high-quality Bluetooth audio, features that, again, are offered by Sony (and even a Panasonic model that costs as much as $150 less). This is fairly massive oversight for a pair of wireless noise-canceling headphones at flagship pricing.

Comfort, too, isn’t quite on par with Sony or Bose. Don’t get us wrong, the Surface Headphones are relatively comfortable for hours of listening, but the Sony and Bose models both offer plusher headbands, making them cozier for all-day listening sessions. The rubberized headband of the Surface Headphones can start to feel a bit hard on your noggin over time.

Their 15-hour of battery life is less than half of Sony’s model.

The Surface Headphones’ noise-canceling is pretty impressive, easily blocking out our office’s HVAC system and all but the clickiest mechanical keyboards, but, again, we get slightly better sound reduction from the Sony WH-1000xM3 and Bose QC35 II. That’s due in part to their softer memory foam earcups, as well as the signal processing itself. Still, that’s not a huge gripe for us, given the overall quality of noise-canceling at this price. Frankly, if the Surface Headphones don’t offer enough noise cancelation for your listening life, you should be considering some custom-molded in-ears to truly block out noise.

Despite the fact that they don’t offer the same advanced Bluetooth codecs as similarly priced competitors, the Surface Headphones do offer the kind of clear, precise sound we expect from a pair of headphones at this price. Listening to acoustic music like Steve Gunn’s Luciano, the bright guitar strings shine at the edge of the stereo image, with subtly mixed elements like slide guitar occupying their own distinct place in the soundstage. Bass is dynamic but not boom-y, bringing just the right amount of physicality to each kick-drum hit.

As with most noise-canceling models, the Surface Headphones benefit from the fact that there is less ambient noise to get in the way of your favorite songs. We were able to listen to our favorite jazz and classical records without any outside annoyances, even hearing the plates and cups in the background of Ahmad Jamal’s classic trio record Live At The Pershing.

Overall, the headphones sound more open and genre-agnostic than the pop-loving Bose QC35 II, but less clarity than the Sony WH-1000xM3.

Though the Surface Headphones are easily set up through Microsoft’s Cortana app, which essentially just tells you how to use them and allows you to use the voice assistant if for some reason you actually want to, we do wish the app included features like EQ profiles, noise-canceling adjustments, etc., like so many competitors. It’s a shame to have such great control over the headphones themselves paired with an app that’s essentially worthless aside from using the voice assistant (which, let’s be honest, isn’t our favorite).

Microsoft offers a two-year warranty on the Surface Headphones covering parts and workmanship.

The Surface Headphones look great and rank among the most intuitive headphones we’ve ever tested, but the tech specs are just too far behind competitors for us to recommend them at their steep price.

As you’ve no doubt guessed, indeed there is. The Sony WH-1000xM3 cost the same and offer a better app, twice the battery life, and both better sound quality and better noise-canceling. Don’t want to spend $350? Get the Panasonic RP-HD605N, which have longer battery life, aptX HD and LDAC support, and also have great controls and can be had for $250 or even $200.

Microsoft has a long history of making robust products, and the Surface Headphones appear to have great build quality. We imagine they should last for many years of solid use. However, their 15-hour battery life is only going to continue to look puny as battery technology advances.

Unfortunately, no. We love using the nifty built-in dials to change volume and noise-canceling, but the competition is better in too many ways for us to recommend the Surface Headphones at their full price.