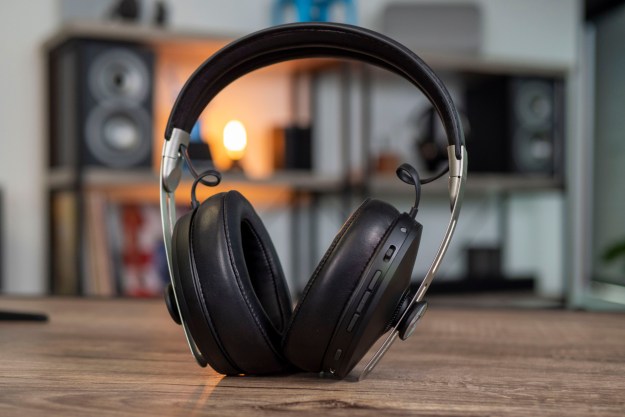 “Sennheiser's latest flagship wireless headphones are better than ever.”

In the three years since Sennheiser last gave us a refresh of its popular Momentum Wireless headphones, Sony has released its WH-1000X line — reigning as our favorite headphones for three generations running — and Bose has totally retooled its flagship model after nearly a decade of recycled design. But where has the Momentum been?

When the Momentum 2.0 came out, we were content with a pair of wireless over-ears that offered Sennheiser fidelity and middling noise-canceling. Now we demand more.

And yet, despite shorter battery life and worse noise-canceling than the current best from Sony and Bose, the Sennheiser Momentum Wireless 3 still manage to carve out a clear place in our listening life. They may not travel as well, but advanced features and fantastic sound make them some of our favorite wireless headphones in 2019.

The Momentum come in a grey, soft-sided carrying case with a lightly padded interior. Unzip the case, and you’ll catch your first glimpse of the classic rounded earcups, metal band, and plush leather earpads that have been the hallmarks of Sennheiser’s retro-tastic Momentum design for nearly a decade.

With classic looks that recall studio models from the ‘70s and ‘80s, the Momentums have long been some of our favorite looking headphones on the market, and we’re glad Sennheiser didn’t mess with a good thing for generation 3. An assortment of microphones that surround the center of each earcup are among the only notable changes in design.

They still look amazing, but there are some things we could see changed that wouldn’t take away from aesthetics. For one, we wish the headband swiveled in two directions. Unlike the latest models from Sony and Bose, the metal hinges above each earcup only allow the Momentum 3 to fold inwards, rather than flat, which takes up more space in backpacks and carry-ons.

Some of the best looking headphones on the market.

We also wish the headband had a touch more padding. After multi-hour listening sessions, the leather-wrapped band began to bother the top of several members of our review teams’ heads. This isn’t uncommon in headphone land, but the best travel headphones pump up the padding for longer sessions.

Another minor gripe applies to the case itself. We wish it had hard sides, because the large footprint on the headphones means they’re more likely to get stuffed in a bag than others. That’s the first indication that — unlike the aforementioned Sony and Bose models, and even Sennheiser’s own new $350 PXC 550-II model — the Momentum are meant less for serious travel and more for occasional trips and commuting.

That said, when you are on the go, one thing we do like about the case is its built-in pocket that contains a 2.5mm-to-3.5mm cable for wired listening, and a USB-C cable for charging, so you’ll never wonder where your cords are.

Rather than using touch controls like Sony and Bose, Sennheiser opted for an assortment of physical buttons on the outside edge of the right earcup to let you control song skip, volume, play/pause, and more.

Unlike touch controls, where we tend to spend a few minutes figuring out each company’s gestures, we were instantly smitten with the simple flat buttons on the new Momentum. A raised bump on the play/pause button makes it easy to locate with your thumb, with the volume up and down buttons located above and below it, respectively.

Logical design makes it easy to skip the manual.

A switch above the volume button allows you to quickly turn noise-canceling on and off, or even pipe in sound from the outside world. Believe it or not, there’s no power button: Instead, you simply fold them closed or open them up at the hinges and they turn off and on automatically.

Such logical design makes it easy to skip the manual. Even the pairing and voice assistant button is located below the volume down switch, in a place where you’re unlikely to accidentally hit it when adjusting other controls. The Momentum 3 also have pressure sensors, which mean that when you take off or put on the headphones it will pause and play music, respectively.

Even with such a vast assortment of physical controls, the headphones do come with substantial app integration. Using the Sennheiser Smart Control app you can pick between three different levels of noise-canceling: Maximum, Anti-Wind, and Anti-Pressure — aimed to help reduce pressure on the ears when flying. You can also turn on audio transparency to hear the outside world, and adjust equalization settings should you not like a given sound signature. In theory, that is.

We won’t beat around the bush: The EQ section of the app is extremely confusing. It doesn’t offer frequency ranges, separate EQ bands, or decibels of reduction/addition for any given frequency, which makes using it like reading a graph with no scale written on the x or y-axis. You can fumble around a bit and find settings that aren’t too terrible if you want to reduce treble, midrange, or bass, but it’s more of a novelty than an actually feature. Needless to say, we stuck with the standard, “flat”, EQ for the vast majority of our listening.

One brilliant feature the Momentum 3 offer that we wish we saw elsewhere? Built-in Tile tracking technology to let you easily track down your missing cans.

That Tile integration and the excellent controls (save the annoying EQ) make up for the Momentum’s rather pedestrian (for 2019, anyway) 17 hours of battery life. For reference, Bose’s 700 offer 20 hours and Sony WH-1000xM3 over 30. We’d be reticent to say that any headphones with two full workdays of juice (and then some) have poor battery life, but we do wish the specs aligned a bit more with the equally priced Bose and cheaper Sony models. It’s also a bit odd because Sennheiser’s new $350 PXC 550-II, which are aimed more explicitly at travelers than Momentum 3, pack 30 hours onboard. Why couldn’t Sennheiser fit the same battery in the Momentum?

The combination of aptX HD technology, great processing, and well-tuned dynamic drivers makes the Momentum 3 an absolute joy to listen to. They manage to simultaneously achieve both energy and accuracy in a way that we’ve rarely experienced from wireless headphones before.

Press play, and the first thing you’ll notice is how tight and direct the bass is. Everything from kick drums to bass licks are prominent in the mix, but the bottom end of the frequency spectrum never pushes your ears into a bassy mud pit. There’s still tons of energy in snare hits, claps, and the lower segment of the guitar and synthesizers, with each instrument able to occupy its own unique sonic space.

On particularly treble-heavy music — stuff with brass, strings, acoustic guitar, or jazzy ride cymbals — things are crisp but never harsh, with a slight scoop in the midrange giving way to a bit of a lift in the high end. This tuning really helps with female vocals, which seem to poke out perfectly inside each mix, supported by the rest of a given song in a very symbiotic way.

An absolute joy to listen to.

We were particularly impressed with the way the headphones handle modern rock music, where layered guitars, synths, and other sonic effects can often blend together when headphones have this much punch in the low end. With the Momentum 3, everything inside each mix remained audible, even when combining with other voices to create a larger soundscape.

The built-in noise canceling does a lot of the heavy lifting when it comes to clarifying mixes. Again, it’s as powerful as what you’ll get from Sony, Bose, or the new Sennheiser PXC 550-II, but the noise reduction offered by the Momentum 3 is more than adequate for most situations. Frequent flyers or those who listen in extremely noisy settings may want the slight edge in dynamic reduction brought by other models, but anyone who works in an office, coffee shop, or travels relatively infrequently should be more than satisfied with the reduction offered by the Momentum 3.

Another thing that makes the Momentum 3 great for is the call quality. Sennheiser has cooked up a very advanced microphone system inside the outer shell of each earcup, and it provides impressive fidelity when calling friends, loved ones, and coworkers.

Sennheiser offers a 2-year warranty on faulty parts or workmanship.

The Sennheiser Momentum Wireless 3 are some of the best-sounding wireless headphones you can buy. While we wish the battery was more robust, the Momentum 3 have all the premium features they need to justify their $400 price.

Those who are looking for more battery life and a better app should check out the Sony WH-1000XM3, which retail for $50 less. Interested in similar style? The Bose Noise Cancelling 700 cost the same amount of money, have slightly worse sound, but have better noise reduction and battery life — and also look great. Frequent travelers may also want to check out the $350 Sennheiser PXC 550-II, which have nearly double the battery life, but look and sound slightly worse than the Momentum Wireless. Those who are exclusively after sound that competes with the Momentum 3, and don’t need noise cancellation should check out the Master and Dynamic MW60, which cost the same amount, and also sound fantastic.

Sennheiser has a history of making quality products, and we expect these to be no exception. They already sell replacement earpads on their website, which means that they expect the headphones to last at least long enough for you to wear out the first pair. We expect 5 years of solid use.

Yes. There are other headphones the offer similar features for better value, but there are very few that offer an overall listening experience that feels this premium. Sennheiser’s latest flagship headphones might no longer definitively be the best wireless headphones you can buy, but they are still some of the best. We highly recommend those who are looking for a pair of premium Bluetooth headphones to take them for a test drive.

Topics
Apple AirPods Max 2: what we know, what we want, and how much it will cost
What is aptX? Cutting through the clutter of Qualcomm’s codecs
What are Bluetooth codecs and do they really matter? The wireless audio tech fully explained
MQair is the new hi-res Bluetooth audio codec for fans of MQA
This massive OLED TV has a $1,000 price cut at Best Buy today
I replaced my kitchen TV with an Echo Show 15 — and I kinda liked it
The best HDMI cables you can buy in 2023
The best speakers for 2023: great hi-fi options for music and more
The best Blu-ray players for 2023
Why the Nest Hub Max still rocks as a kitchen TV
Stream live sports without cable with Sling — now 50% off
OnePlus Buds Pro 2 to support Android’s new spatial audio feature
Should you mount your TV above a fireplace?