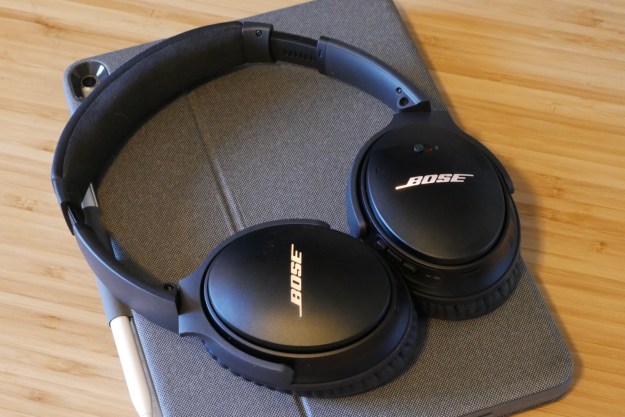 “Bose is a noob in gaming audio, and it shows.”

I own four pairs of headphones. That might sound silly, but I’m guessing you’re not far behind me. Here’s my list:

I blame this absurd situation on the hodgepodge of audio compatibility found on various devices. My PC gaming headset works great for my PC, but not well with the PlayStation 4, and not at all with anything lacking USB-A. My Sony PS4 headset is only useful for the PS4. My wireless earbuds technically connect to everything I own, but their short battery life means I reserve them for use with my phone. And my wired headphones, now 12 years old, are still the best choice for music, but they need a 3.5mm headphone jack, and they’re too large to comfortably use away from a desk.

Obviously, my life would be less cluttered with just one device to do it all. Enter the Bose QuietComfort 35 II Gaming. Based on the beloved QC 35 II wireless , the Gaming model throws in a wired mic for lag-free PC gaming. They connect to everything I own, and can even connect to two devices at once.

At $330, though, the promise of do-it-all connectivity isn’t cheap. Can the QC 35 II Gaming deliver on their promise?

Crystal-clear audio is this headset’s primary aim. It’s a conversion of a wireless headset that normally targets audiophiles, so I was expecting an excellent experience.

I’ll start with the bad news. The Bose QuietComfort 35 II Gaming start life as a pair of wireless headphones, so they lack the flavor of sound I expect from a wireless gaming headset. They’re balanced and crystal clear, but lack surround sound virtualization, a feature that today pairs with gaming like butter on toast.

In Call of Duty: Warzone, however, the lack of punch was so noticeable that, at first, I thought my audio settings were wrong. They weren’t. The QC 35 II Gaming just can’t compete with the impressive virtual surround sound on headsets like the Logitech G733 or SteelSeries Arctis 7.

The tradeoff for this is great audio quality everywhere else, which does matter. Modern gaming headsets pack a wallop, but usually have muddy sound that removes detail and nuance.

Switching from a Logitech G733 to the QC 35 II is a night-and-day difference – and I really enjoy the G733. Logitech’s headset is perfectly fine in just about any situation. But pit them against Bose in my Spotify Rewind playlist and, well, Bose schools the Logitech.

Your opinion of the QC 35 II Gaming’s sound will come down to what you play. If you just want to game, and you play games that make decent use of virtual surround, you’ll be better served by a dedicated gaming headset. If you want to listen to a variety of media, or play games that emphasize great soundtracks and audio design over volume, the Bose QC 35 II could make sense.

Confused? Here’s the real head-scratcher. The QC 35 II Gaming already have a built-in microphone. So why have another, corded microphone?

The answer to that question – which hardcore gamers have already guessed – is lag. Bluetooth is not a perfect solution for gaming because of latency. It’s not ideal to hear an opponent’s rifle 200 milliseconds after it’s fired. That’s why wireless gaming headsets ship with proprietary wireless dongles instead of using Bluetooth. The QC 35 II Gaming already has Bluetooth, though, so Bose slaps on a wired microphone that also tethers the headphones.

In fairness to Bose, the company clarifies this in its marketing. The QC 35 II Gaming are pitched as a gaming headset that also have a “wireless lifestyle mode.” Bose isn’t misleading anyone. But that doesn’t make the wired microphone less annoying.

At least the wired microphone is excellent. I compared it back-to-back with the Logitech G733, Logitech G533, and Razer Kraken. The QC 35 II Gaming was the clear victor. All four headsets are adequate, but the QC 35 II Gaming have a clean, crisp quality that’s a step above the norm.

Alright. I’ve bashed on these Bose for awhile now — and rightfully so. They’re an awkward attempt to convert a great pair of into a gaming headset, and it doesn’t entirely work. But the Bose QC 35 II Gaming remain, at their core, the Bose QC 35 II. You can read our review of the Bose QC 35 II for our A/V editor’s expert perspective, but I’ll summarize the perks.

The QC 35 II Gaming are compact, fold up for portability, and come with a travel bag. They’re light and comfortable to wear. While still an over-ear design, the earcups are smaller than most gaming headsets, and they breathe well. Build quality is outstanding. The phone app, which manages wireless connections (the QC 35 II Gaming can connect to two Bluetooth sources at once), is simple but works well enough.

It’s the so-called “lifestyle mode” where these benefits matter most for the Gaming version, and that’s not an unattractive pitch. You can use the QC 35 II Gaming with a gaming rig at home, listen to music on your phone while doing chores, or take them for a walk around the neighborhood.

You can now buy gaming headsets with both a lag-free wireless connection and built-in Bluetooth, like the SteelSeries Arctis Pro Wireless. Those headsets can serve as an all-in-one audio device, too, just like the QC 35 II Gaming. But they’re larger, heavier, often don’t work as well with mobile devices, and usually have a retractable (instead of detachable) microphone.

Don’t forget the QC 35 II Gaming’s active noise cancellation, either. It’s effective, eliminating most repetitive noises and significantly decreasing the volume of everything else. This is less useful for gaming than it is for on the go. Bose is the master of ANC, and the QC 35 II Gaming’s ANC quality is superior to any gaming headset, or , I’ve used.

The QC 35 II Gaming’s battery life again underscores the headset’s awkward conversion. Bose claims up to 40 hours in wired gaming mode, and up to 20 hours in wireless lifestyle mode.

That’s right. Battery life is limited in wired mode. Forty hours is a long, long time. I usually game for no more than two hours a day, so the QC 35 II would theoretically last three weeks, and I never put a dent in its endurance while wired.  On the other hand, gamers who play a lot will eat through a charge in two or three days.

Bose quotes 20 hours of wireless battery life. They seem to come close to this number. In a twist, the QC 35 II QC Gaming headphones are so comfortable that I found myself wearing them more often than usual. That’s a good sign, though it meant I charged them once every two to three days – more often than the less comfortable Logitech G533 that are my usual daily driver. Still, I can’t knock Bose for making me want to wear the QC 35 II Gaming.

The QC 35 II Gaming have a customizable button that can be used to control ANC. It can also summon Alexa or Google Assistant. This is a key feature for the QC 35 II , but its irrelevant for a gaming headset. It can be useful while you’re using the QC 35 II Gaming as , and the built-in mic is preferable to yelling at your phone from across the room.

As mentioned earlier, the QC 35 II Gaming come with a volume puck. Its inclusion is a wise move by Bose, as it does ease the annoyance of wired use. Without the puck, you’d have to plug the headset into your desktop’s 3.5mm audio directly, and that would be a chore. Controlling volume by twisting the puck is also more convenient than using the headphone’s volume buttons.

Yet wire length was still an issue. A short 3-foot 3.5mm audio cord connects the microphone to the puck. It’s barely long enough for the job. I usually route the audio cord on my wired headphones around the side of my desk to keep it from snagging on my keyboard or the HOTAS (hands on throttle-and-stick) I use for Microsoft Flight Simulator, but that’s not possible here.

The Bose QuietComfort 35 II Gaming are excellent shoehorned into a disappointing gaming headset. They look great, sound great, and have excellent ANC. But their wired implementation of gaming connectivity is not ideal, and it’s hard to square that with the $330 price tag.

Yes. The SteelSeries Arctis Pro Wireless, Sennheiser GSP 670, and HyperX Cloud Flight S are examples of great gaming headsets that can connect over wireless or Bluetooth. If you just want a gaming headset, solid entries like the Logitech G733 start at $130.

The Bose QC 35 II Gaming have them beat as everyday headphones, but if you’re buying a gaming headset, gaming is the priority. Other gaming headsets are easier to use, support wireless gaming, and have 7.1 virtual surround sound.

The QC 35 II Gaming are exceptionally well-built, and personally, I’ve never broken a headset or a pair of headphones (though I did wash my AirPods). Accidents aside, you can expect the QC 35 II Gaming to last as long as the battery life holds up. Heavy users might want a new pair in three years, but I think most owners will enjoy at least five years of use.

No. The Bose QuietComfort 35 II are great , but they’re disappointing as a gaming headset. Gamers should stick with headsets built for gaming from the ground up.

Topics
Netflix expands its spatial audio, number of devices that can download content
Peacock does away with free tier for new subscribers
Klipsch follows the success of The Fives with The Sevens and Nines powered speakers
The best OLED TVs for 2023: from LG, Sony, and Samsung
YouTube TV: plans, pricing, channels, how to cancel, and more
Apple’s MLS Season Pass is about more than just streaming games
Best 75-inch TV deals: Get a large screen for the Super Bowl
Flash sale drops the price of this 55-inch QLED 4K TV to just $370
Sony’s 2023 AV receivers are Sonos-ready and work with wireless speakers
Rode’s NTH-100M headphones are built for gamers
The best movies on Disney+ right now (February 2023)
Perfect for the Super Bowl, Samsung’s Frame TV is $1000 off
Save 40% on Peacock Premium when you subscribe today