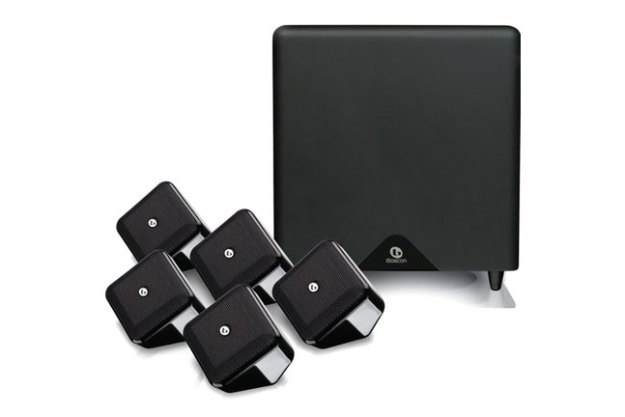 “The Boston Acoustics SoundWare XS-SE speaker system does what it was set out to do, and does it well.”

Audiophiles everywhere love to hate Bose for introducing the “cube speaker.” Once Bose got it into the heads of consumers that flashy sounding audio could be had from 3-inch cubes mated with a subwoofer, a new product category was born. The trouble, according to audio purists, is that these speakers simply aren’t musical. Often, the sound they make is likened to the noise that comes from a sheet of tin foil. Yet consumers clearly find the compact, out-of-the-way size of the speakers compelling enough, apparently, to forego high-end sound quality in favor of aesthetics. So, although initially reluctant to jump on board, quality speaker makers eventually recognized the opportunity, acquiesced and began designing their own cube speaker systems to sound as musical as possible.

You’d think there’s only so much that can be done with a 2-inch speaker crammed into an enclosure barely larger than the speaker itself. Yet, manufacturers like Orb Audio and Mission have done an impressive job of making stylish, micro-speakers that sound pretty good and, thus, gained some fans.

Recently, Boston Acoustics joined in with its own take: The SoundWare XS speaker system.

In our SoundWare XS-SE Speaker System review, we take a look at what makes Boston Acoustics’ flavor of micro-speaker a little different, discuss its sound quality and rank it against the likes of similarly sized and priced systems.

If there’s a proper geometric term for the shape of these speakers, we haven’t been able to find it. We can best describe them as a quasi-cube with a diamond-shaped rear end. What you get out of the shape is some versatility when it comes to placing the speaker on a surface. You can either set the speakers up so that the drivers point straight out into the room, or angle them upward, which would be ideal for desktop placement.

The satellites measure roughly 4 5/16 x 4 ½ x 3 ¾ in inches, and as the special-edition version of the system, feature a high gloss piano-black finish (the standard system has matte black satellites). On the back of the speaker are two small binding posts and two small channels for neatly routing speaker wire. These small speaker connections later proved to limit our speaker wire size to tightly wound 16 gauge wire, or wire terminated with pin connectors.

Underneath the speaker grill are not one, but two separate drivers. For this system, Boston Acoustics outfits the satellites with a 2.5-inch woofer seated beneath a ½-inch tweeter, officially making it a two-way speaker.

The ported 8-inch, 150 watt, down-firing subwoofer measures 12 ¼ x 11 3/16 x 15 9/16 inches and comes with a matte black finish and smooth, rounded edges. This sub offers a single RCA input, a volume dial, a crossover dial and a phase switch. The slightly resonant sound we get when rapping on the sub’s enclosure indicated it’s made with some quality materials, but probably not very well braced.

While we’re talking about size and specs, we wanted to mention that Boston Acoustics recently announced the availability of the SoundWare S speaker system. As the bigger brother to the SoundWare XS, the “S” system features slightly larger satellites with 3.5-inch woofers, ¾-inch tweeters and a larger, more powerful, 10-inch, 200-watt sub. The importance of mentioning this will become more apparent in our performance section, though we imagine you can probably see where we’re going already.

The potential value of the $599 SoundWare XS-SE speaker system was immediately apparent upon cracking open the box. Sitting at the very top, nestled into slotted Styrofoam compartments, we found pivoting wall mounts for all five speakers — a big deal considering stands and mounts usually cost extra.

In the layer just underneath the mounting hardware, we found five SoundWare XS speakers. Under the speakers was the system’s subwoofer and power cord.

According to Boston Acoustics’ printed specs, the satellites in the SoundWare XS system should be capable of playing down to 150Hz. We had our doubts, but went ahead and chose a 160Hz crossover point in our Marantz receiver, set the sound mode to all-channel stereo and let the speakers and sub break in for about 60 hours before we came back to them. We should note that this system benefited a great deal from some break-in time. Both the subwoofer and satellites were able to reach deeper, and sounded much more natural post break-in.

On our return, we decided to run Audyssey on our Marantz receiver and, later, YPAO on the Yamaha receiver. We got some interesting results. Both receiver set-up routines sensed some phase discrepancies amongst the speakers. We double- and triple-checked our wiring after our first go with Yamaha’s YPAO and ran the routines again. Again, we got some erroneous readings. After several different attempts, the speakers finally came back as in phase. We never did figure out what was causing the problems, but we’re confident it was related to the speakers since we’ve had no problems on our test bench until now.

Both routines chose to cross the speakers over at 200Hz but we could hear the speakers going a little lower than that, so we later redirected our receivers to cut the satellites off at 160Hz instead. That turned out to provide a better blend between the satellites and sub.

Since this system is geared toward those looking for a compact home theater, we want to begin with the evaluations we made while listening to movie tracks, then move on to its musical performance.

Feeling somewhat nostalgic, we pulled out some old standby movies for surround track testing. Titan AE and The Fifth Element are long-time favorites and provide some real workout moments for any system. During the ice crystal scene in Titan AE, we get a blend of delicate and harsh treble as the ice crystals crack around the ship. Later in the scene, as two huge crystals collide around the ship forming a cave, some seriously low bass gets fed to the subwoofer. Here, the SoundWare XS speaker system showed off its high-frequency prowess as crackling ice sounds danced around us. The tweeters in the satellites managed to reproduce some of the subtle ringing sounds that are hidden within the effects.

When it came time to put some boom in the room, the SoundWare XS subwoofer got plenty loud, and did shake the walls a bit. However, as you might expect from a low powered, 8-inch subwoofer, it wasn’t quite able to reproduce the lowest octave which, when reproduced with authority, will rumble your innards. Still, it provided a visceral experience superior to that of home-theater-in-a-box systems.

The surround effect was entertaining, and the sound-stage was impressive for a small speaker system, but we didn’t feel completely enveloped in the same way we do with larger, bookshelf-sized speaker systems. Again, that’s to be expected.

Dialog suffered somewhat from a lack of presence, though it was always clearly intelligible thanks to the capable tweeters in the SoundWare XS satellites.

Moving on to music, we started our listening with Earth Wind and Fire’s Gratitude. With the receiver in stereo mode, only the front left/right speakers and subwoofer were active. As the EWF horn section came in, we got a good dosing of bright brass and funky slap bass along with the drum’s cymbals before the rest of the band joined in. The separate tweeters in the SoundWare satellites were a clear benefit to the speakers’ design. With plenty of intense treble in the material to produce, the satellites could easily have made mud pie out of the music. Instead, they clearly produced each instrument in their own space, giving off the vibe of a high-end speaker system.

On the opposite end of the sound spectrum, we had the 8-inch subwoofer doing far more work than any subwoofer should be asked to do. It’s hard for a sub (especially a ported sub) to reach up into the 160Hz-to-220Hz area and do so evenly. The SoundWare sub does a pretty decent job, though. While it doesn’t reach down extremely low, it does move fast enough to keep up with the satellites and integrate itself so it doesn’t sound like a booming box off to the side of the room. That’s really saying something when you consider the price of this system ($499 for the standard finish, $599 for the gloss). Boston Acoustics could have taken the cheap road on this sub, but chose instead to put a little money into it, and the investment pays off. What you get for the price is actually quite good.

Somewhere between the excellent treble performance and adequate bass output, we have the SoundWare XS’s midrange response, which we’d describe as “acceptable”. The truth is, we’ve heard far worse but it is just so difficult to enjoy music on a system of this size when we can so clearly hear what we’re missing. Vocals lacked warmth and body, the bass guitar lacked the meaty growl we like to hear and percussion didn’t have the pop we listen for. But, that is what you give up with a system this size. At the end of the day, in the battle between man and acoustics, size remains a factor to some degree.

Though they didn’t have the high-frequency zest of the SoundWare satellites, the Orb Mod 1 sounded a bit warmer and more open, which stands to reason given their larger 3-inch driver. This is why, for as high a value as the SoundWare XS and SoundWare XS-SE systems are, we can’t help but think that the real winner in Boston’s compact speaker lineup is probably the SoundWare S system. With its larger drivers and more powerful subwoofer, it likely fills in some of the missing midrange we were hungry for with the smaller XS system.

The Boston Acoustics SoundWare XS-SE speaker system does what it was set out to do, and does it well. We found it to be an extremely compact, dynamic speaker system that provides an entertaining movie experience with fidelity several steps above the everyday home-theater-in-a-box. While it wouldn’t be our first choice for music listening, we do think it will appeal to consumers looking for an attractive speaker system that stays out of the way and provides an enhanced movie-watching experience. With mounting hardware included and above-average sound for its class, this system represents a solid value. For a better music listening experience, we would recommend checking out the new SoundWare S speaker system instead.