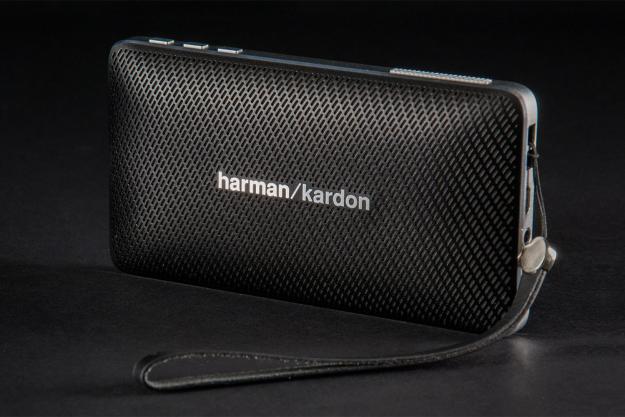 “The Esquire Mini beckons with its sleek and sexy design, but the tradeoff for its waifish profile is equally thin sound.”

Over the last few years Harman Kardon has been hard at work reinvigorating the design of its products, offering a level of elegance and simplicity once reserved for the likes of Bowers & Wilkins, or (dare we say it?) even Apple. The latest example of the company’s more polished design chops is the sleek and stealthy Esquire Mini portable speaker.

HK is far from the first company to draft up a speaker meant to fit in your pocket, but its latest example might just be the most beautiful. Looking more like a mobster kingpin’s cigarette case than a speaker, the Esquire Mini aims to be the executive’s wireless device, ready to play music in an office or hotel room, or stand in as a speakerphone in the conference room. Unfortunately, the Esquire Mini’s sexy-slim dimensions, while aesthetically appealing, seem to significantly limit the speaker’s sound quality, and for $150, we simply expect more.

Sophisticated. Ultra slim. Portable. These are the words that greet you on the front of the Esquire Mini’s box (mirrored in French), and once the black ribbon has been pulled to extend a sliding drawer from within, the speaker doesn’t disappoint. Removing the Esquire Mini from its bed of thick foam reveals a striking design highlighted by a slotted front screen with a touch of gloss, a silver band of brushed aluminum around the edges, and a hard backside that vibes more like leather than plastic, struck through the center with a pop-out kickstand.

Under the black foam inside the box resides an ample collection of accessories, including a long tangle-resistant charging cable, a packet of instructions, and a leather wrist strap.

The Esquire Mini feels good in your hands — heavy enough to relay quality, and, at just under an inch, slimmer than any speaker of its kind we’ve encountered. The total dimensions are 3-inches high, 5.5-inches wide, and around 1-inch thick — about the size of an extremely bulky smartphone. Our model came in classic black, but alternatives in white or burnt orange are also available. A gold model is reportedly on the way as well, for the aristocrat.

The Esquire Mini looks more like a mobster kingpin’s cigarette case than a speaker.

Beneath its slotted front screen the Esquire Mini harbors a pair of drivers that measure just over one inch in diameter each. Unlike most speakers of its kind, however, there’s no room on board for any passive radiators, which are often crucial assets for filling out a small speaker’s sound. Frequency response for the Esquire Mini reflects its lack of bass potential, rated at 180Hz-20kHz.

Along the top of the Esquire Mini rest four control keys, including buttons for power, Bluetooth pairing, speakerphone control, and volume adjustment. The left side bears a five dot LED array for monitoring battery life, along with an echo/noise canceling microphone. The right side of the speaker holds the inputs, including a micro-USB power/charging port, a 3.5mm Aux input, a slot for an included wrist strap, and a USB port for charging a device from the speaker’s rechargeable battery, which is rated for a max 8-hour runtime.

As much as we’d hoped the Esquire Mini’s sound would resonate beyond its slim dimensions, the speaker’s premium aesthetic broke down when we put rubber to road. While the speaker offers some pleasant moments of clarity and finesse, especially in the vocal region, it is relegated to an overall sound that’s as slim as its profile.

Calling up some of our favorite rock and acoustic tracks, the Esquire Mini immediately relayed a tinny color in the midrange, with a little too much bite. We didn’t hear the kind of clean extension we’d hoped for in the treble, and just as its frequency response rating suggests, the Esquire Mini’s bass response is virtually non-existent. Everything from Paul Simon’s “Graceland” to “Kiss” by Prince lacked not only bass, but more generally, was short on body.

We know what you’re thinking. “What do you expect from a speaker this size?” The answer is, we expect the kind of evolutions in sound offered from today’s top miniatures in the Esquire Mini’s weight class, such as the Carbon Audio Pocket Speaker (now from Boomphones), which blasts the Esquire Mini out of the water with a rich lower midrange, and enough power and presence to provide a passable representation of the songs we know and love.

Not only did the Esquire Mini fail to deliver down low, but pressed by some of our more challenging selections, such as “Ingenue” by Atoms for Peace, the speaker got warbly with distortion. To make sure we weren’t unfairly pressing the speaker, we did an A/B comparison of the song with Sol Republic’s slim $70 Punk — no audiophile device by any means. The cheaper speaker held its own, with no distortion issues, and richer bass extension. In fact, it outperformed the Esquire Mini on several of our music selections.

Our favorite aspect of the Esquire Mini’s sound was its penchant for clarity and dimension. It also showcased some impressive stereo separation for such a small speaker. “Pieces of What” by MGMT, for instance, was played with well drawn auxiliary tracks behind the lead vocals and synths, as well as some decent spread between the left and right sides. Unfortunately, the Esquire Mini’s best moments failed to outweigh its worst.

While Harman Kardon has crafted a gorgeous portable speaker in the Esquire Mini, it has done so at the expense of quality audio performance, offering a meager field of sound, with virtually no bass response, and occasional distortion issues. Thanks to its stellar design aesthetic, we could easily gaze on the Esquire Mini all day, but the listening window is much narrower.