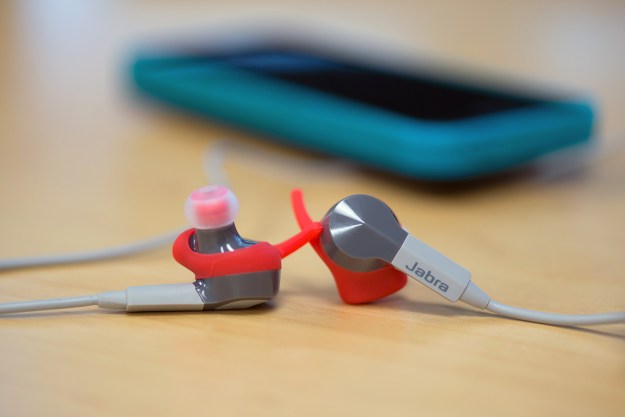 “The Jabra Sport Coach is a digital coach that motivates you to meet your goals, but the unique sensors offers little practical advice.”

Jabra has jogged down this road before. We first saw the fusing together of wireless music playback and activity monitoring in the Sport Pulse Wireless, a pair of Bluetooth earbuds with an in-ear heart rate monitor that worked with a smartphone app to gather all sorts of fitness data while providing a soundtrack for your workout.

Now Jabra is back with the Sport Coach Wireless, which ditches the heart rate monitor in favor of a “TrackFit” motion sensor instead. Using the sensor, Jabra’s smartphone app (available for iOS and Android) is supposed to be able to track movement and use the data to help motivate you with verbal feedback piped through the earbuds – think of it as a digital coach that motivates you to push yourself and meet your goals.

For fitness buffs, this is a fun proposition. But heart-rate monitoring is easy – how accurate is this motion sensor? And has Jabra done anything to address the sub-par sound we experienced with the previous model? We broke a sweat with the buds to find out.

Jabra uses almost the exact same packaging as it did with its previous set of Bluetooth earbuds, and flipping open the box’s front panel reveals buds that look a lot like their predecessor as well. Below the headphones is a box storing a small zippered carrying case which, when unzipped, reveals a short micro USB charging cable, two plastic clips (to cinch up the cables), three sets of “ear wings” (for securing the buds in place) and three extra sets of clear buds (Jabra refers to them as “eargels”).

The plastic bag holding the Quick Start Guide also has a code to download the free Jabra Sound app for iOS or Android.

Yellow is the Spot Coach’s primary color, trimmed with a light gray rather than black on our review unit. The buds do come in red or blue, too. The form factor also doesn’t stray far from the Pulse, utilizing a contoured design complemented by ear wing gels to help keep them in place within the ear’s inner rim and canal. When we first looked at them and put them on, we were immediately reminded of the previous model, and in fact, the ear wings and buds from the Pulse would fit on the Coach, or vice versa.

The Sport Life app presents activities and workouts in a way that’s easy to understand.

The included clips can be used to shorten the slack of the cable so it doesn’t dangle, whether you choose to wear them under the chin or around the back of your neck. Being so tiny, though, we were scared to lose them because they would be impossible to find. The cable length (about 21 inches) is the same as the Coach, and the remote is in the exact same spot, a few inches below the right earpiece.

The remote itself is also a carbon copy of the previous one, complete with a main button flanked by volume buttons and an inline microphone for phone calls and voice commands. Holding the main button turns the headset on and off, or holding it for a couple seconds can bring up Siri or Google Now (looks like BlackBerry Assistant also works, but not Cortana on Windows Phone). Simple presses can play and pause, or accept or end a call. A longer press on either of the volume buttons can skip or go back a track when listening to music.

The TrackFit sensor is on the left earbud, exactly where the heart rate monitor was on the Sport Pulse Wireless. Bluetooth 4.0, NFC and digital signal processing are also embedded in the unit.

Turning the Sport Coach on puts them into pairing mode, and within seconds we were set up with an iPhone (we also paired with an LG G4). A familiar voice prompt confirmed the pairing. The Sport Coach is designed to work in tandem with Jabra’s free Sport Life app for iOS and Android to add the “coaching” element to the earbuds.

To make things easier, the Sport Life app (for iOS and Android) presents activities and workouts in a way that’s easy to understand. A number of options are available, and tapping the icon at the top allowed us to add our own, if we were so inclined. The idea is essentially the same as it was with the Sport Pulse: Choose an activity, decide on a workout based on a pace or target, and customize if necessary.

The voice coach is meant to be both a spotter and vocal aid, noting the next exercise, while also mentioning the duration, pace, and distance of the workout along the way. This is a more active approach than with the Sport Pulse, except the app is essentially doing the same thing it always was. The results were highly accurate, but we also noticed we could get a similar experience using a different set of earbuds. The motion sensor in the left earbud should be capable of doing more to set the Sport Coach apart, though we didn’t notice anything beyond tracking our movements per exercise.

Where the earlier Sport Pulse faltered most was in audio quality – we were only satisfied if we turned up the volume and pushed the buds into our ears to breathe life into the bass. The Sport Coach improves on this, adding more heft to the lows, but not enough to consider it a leap forward from its predecessor.

Like before, noise bleed is an issue here, and it was the case in all three earbud sizes. Understandably, some outside sound has to seep in for users to stay aware of their surroundings while out on a run or at the gym, except Jabra has yet to crack the right balance without sacrificing some of the bass. How they fit may play a role as well. Not every pair of ears is the same, but we’re confident audio performance will be consistently meh either way.

As before, we tried to use earbuds from other manufacturers to see if we could plug any sound gaps, but they didn’t really change much. Like the Sport Pulse, the Sport Coach uses earbuds that are more recessed than typical buds from other makers, so we figured alternates would create a tighter seal. They didn’t, and we noted that seepage was more or less the same.

For phone calls, we found the Sport Coach was great. No one complained about voice quality and it was easy to answer a call by simply pressing the main button on the remote. Holding it down for a few seconds would bring up Siri on an iPhone to make a call or send and respond to text messages.

Battery life isn’t exceptional, and they will need a recharge if you plan to use them all day. Jabra rates them at 5.5 hours, but we never quite made it that far on regular usage. We suspect this was due to listening at a higher volume and putting the motion sensor to work via the app. It should be fine over a typical run or workout, but beyond that, having a portable charger handy should help if you plan to be out with these for a longer stretch.

The Jabra Sport Coach is essentially the same as its predecessor with a slightly different tack. The motion sensor arguably offers greater flexibility than the heart rate monitor of the Pulse, except Jabra has yet to fully utilize its capabilities. That doesn’t mean it can’t or won’t, only that it didn’t do more than it should’ve out of the box.

The improved music playback doesn’t go far enough in plugging the sound gaps that plagued the Coach’s predecessor, but for some, it may be enough to give these a chance. At $150, they are cheaper than the Pulse, making them more affordable, but with the motion sensor not playing its roll, it’s a toss up as to whether the lower price improves the overall value of what’s available here when other Bluetooth headphones on the market sound better.

Topics
Sony’s 2023 AV receivers are Sonos-ready and work with wireless speakers
Netflix expands its spatial audio, number of devices that can download content
Peacock does away with free tier for new subscribers
Klipsch follows the success of The Fives with The Sevens and Nines powered speakers
Best 75-inch TV deals: Get a large screen for the Super Bowl
Flash sale drops the price of this 55-inch QLED 4K TV to just $370
Rode’s NTH-100M headphones are built for gamers
The best movies on Disney+ right now (February 2023)
Perfect for the Super Bowl, Samsung’s Frame TV is $1000 off
Save 40% on Peacock Premium when you subscribe today
How to watch Super Bowl 2023
The best movies on Hulu right now (February 2023)
The Super Bowl is finally in Dolby Vision – if you have Comcast