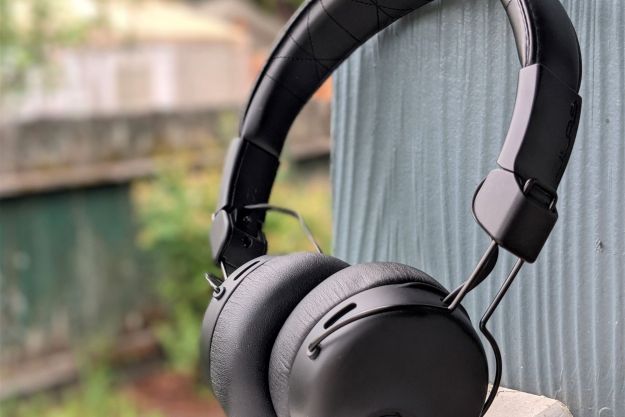 As a general rule of thumb, any product that promotes an all-star lineup of features for a rock-bottom price should be initially met by a two-fold reaction: Intrigue, then skepticism.

So when JLab Audio’s $59 Studio ANC headphones arrived at my doorstep with the promise of more than 30 hours of battery life and active noise cancellation prominently displayed on its packaging, I proceeded with measured optimism to find out if this new on-ear offering was actually good — or too good to be true.

I won’t waste time detailing the packaging of the Studio ANC to you, since it’s a largely forgettable enclosure. That’s not a slight at JLab – it’s not a bad thing that they focused on the present rather than the wrapping paper.

Included with the headphones is a surprisingly cushiony travel bag, an auxiliary cable, a USB charging cable, and a user manual. You won’t need the manual to get the Studio ANC connected to your mobile device, since that’s standard practice if you’ve ever had any experience with Bluetooth pairing. I would suggest looking at the manual, however, to fully grasp the controls divvied out to the headphones’ four buttons.

JLab arms the Studio ANC with Bluetooth 5 technology, which is solid considering far more expensive headphones are still working with older Bluetooth versions that lack the range and speed benefits of the newer tech.

After some extensive time with these headphones, I’ve been issue-free with my connection. Range was exceptional as well, allowing me to move about my house without worry of an interruption while my phone sat charging.

The on-ear style of the Studio ANC make them a sort of middleman between over-ear headphones and in-ear wearables, which makes for a mixed bag of benefits and drawbacks.

At 141 grams, the Studio ANC are much lighter than many full-fledged over-ear cans. At the same time, they retain the design of their bigger brothers and only further highlight the subtle aesthetic that’s helped make in-ears so popular.

The Studio ANC have what JLab calls “Cloud Foam” earcups and an adjustable faux leather headband. It’s a comfortable combination at first, but I couldn’t help but notice that feeling start to wear over time. It may not be a huge deal to most, but the headphones created more pressure than was necessary, and it became a factor over longer listening sessions.

You’ll find four buttons, all on the right side. There’s a round power button, which moonlights as a way to answer or end calls and activate your voice assistant of choice. There are volume up and down buttons, which can also help you thumb through tracks. And there’s the Active Noise Cancellation button, which is so well disguised as the JLab logo on the right earcup that I would have missed it entirely if not for the manual.

Right off the bat, I feel compelled to first address one of the biggest claims by JLab: 34-plus hours of playback without ANC, and 28-plus hours with the feature turned on. By comparison, the recently released Microsoft Surface Headphones 2 max out at 20 hours without ANC, and come with a hefty $250 price tag.

If there is a catch with the Studio ANC, battery life isn’t it. I’ve been listening to these consistently for the past week, and I haven’t even unwrapped the charging cable. That’s remarkable for headphones at this price, and to me it stands out as one of the best aspects of the Studio ANC.

Feature-wise, there isn’t much else to mention. The voice assistant integration works well, and I was able to make Amazon Alexa my default A.I. despite JLab just listing Apple’s Siri and Google Assistant as options. They were fine to take on walks, though I’d caution against exercise with them. There’s no waterproof rating for the Studio ANC on JLab’s website, which is reason for concern about how they would hold up to sweat or rain.

If you’ve been waiting for the moment that these headphones inevitably came back down to earth, here it is. Despite having reasonable comfort and some great features for cheap, the Studio ANC sound exactly like what they are — just another pair of $60 headphones.

That’s not to say they’re bad. In fact, if you’re listening almost exclusively to podcasts these days (like yours truly), I wouldn’t hesitate to recommend them. You don’t need an abundance of audio quality to enjoy Conan O’Brien Needs a Friend, and the Studio ANC fit that bill quite well.

If you’re hoping for solid cans for music listening, though, you may want to keep shopping. Regardless of genre, I couldn’t escape a seemingly distant sound with an oddly hollow low end. You get what you pay for in this case, and I wouldn’t buy them anticipating great budget audio quality along the lines of something like the Shure SE 112.

There’s no equalizer to tinker with the audio of the Studio ANC. There is, however, a JLab-branded burn-in tool available for download. They recommend at least 40 hours of burn-in time — which in a nutshell means playing different tones and frequencies through the headphones to reach optimal performance.

In addition to the pair of microphones focused on active noise cancellation, the Studio ANC has a third mic dedicated to picking up your voice for phone calls. I found the call quality to be admirable, allowing my conversations to break through the turbulence of a windy spring day during a walk.

The active noise cancellation in the Studio ANC is a no-frills feature. It offers just one level of ANC, and there’s no ambient sound mode. You have a button to turn it on or off, and that’s it.

The ANC feature is effective, at least in the context of budget headphones. You won’t have an uninterrupted listening space by toggling the ANC feature on, but you will have harsh sounds like lawnmowers or power tools dampened to a degree. If you want more impactful noise cancellation, you’ll have to pay for it. Otherwise, the Studio ANC is serviceable in this department for its price point.

JLab isn’t the only company making extremely cheap ANC headphones. Anker makes a similarly priced pair with hybrid ANC, and companies like Cowin and TaoTronics are also in the market. We haven’t had the chance to test these other products, though, so I can’t currently comment on how well the Studio ANC stack up.

JLab may have missed the mark in terms of audio quality, but the company has still delivered a pair of incredibly affordable headphones with great battery life and adequate active noise cancellation.

The $70 Shure SE 112 are our current favorite budget headphones, offering great sound quality for a price that won’t put a dent in your finances. If you don’t mind spending more for a product with similar battery life and improved audio, the $199 Sony WH-CH710N are a solid option.

The Studio ANC feel sturdy enough, though I wouldn’t hedge my bets on a cheap set of headphones having the build quality to stand the test of time.

Yes. They aren’t for audio enthusiasts. But for less than $60, you get a pair of headphones that can last nearly an entire work week without needing a charge. These make sense for people who want a simple, affordable, reliable set of cans.