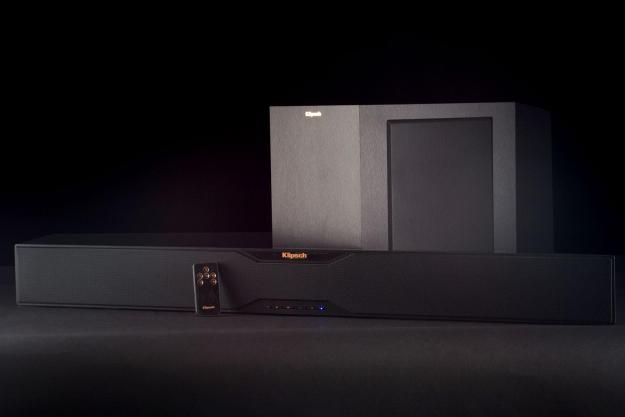 Klipsch’s recently-unveiled Reference speaker line promises to provide premium performance without the premium price – not exactly a novel marketing concept. But in our experience, Klipsch stands as one of the few companies that regularly delivers on that promise.

Recently, Klipsch has been rolling out a full suite of products under the new title, from tower speakers to headphones, all of which are designed to offer a unified sound signature by leveraging similar components from Klipsch’s sizable toolbox of patented designs.

The Reference R-10B is the first line of defense in succinct home theater sound, filling the all-important sound bar slot for the brand. At $600, the bar is no bargain buy, and it also leaves behind a few features we’re used to seeing in today’s entry-level competitors. But true to its reputation, the R-10B brandishes some powerful weapons, and it knows how to use them.

Opening the R10-B sound bar system is a tale of two pieces, each with radically different construction. The sound bar itself looks sharp enough, with sleek curves, and a distinctive X-shape carved out for its metallic grill that gives off a subtle superhero vibe. However, while we liked the look, its plastic cabinet felt a little light for the money.

We’ve never seen a subwoofer this solid in an all-in-one solution before.

That may be by design, as we also immediately noticed the bar’s tall profile, which could cause trouble by blocking your TV’s IR sensor, meaning this bar will work best mounted on the wall for most.

But the subwoofer! Simply put, we’ve never seen a subwoofer this solid in an all-in-one solution before. This thing is heavy – just as a good subwoofer should be — and its MDF enclosure feels rigid and substantial when given a knock. A succinct panel at the back sports the essentials, including a power switch and volume dial, which sit below a slim horizontal vent at the top.

Accessories in the box included power connections for the bar and sub, RCA and digital Optical cables, setup instructions, and as dainty a card-style remote as you’re likely to find on the market.

There’s a lot to like about the R-10B, especially once you fire it up. But right out of the box, it was easy to identify where Klipsch cut a few corners. An input panel in a cubby at the backside houses the main power switch, the power port, and requisite inputs like RCA and digital Optical connection. However, there is no HDMI input, which limits the bar’s functionality a bit when it comes to performance and day to day use — more on that in the Setup section.

We were also a little underwhelmed with the sound bar’s control panel. We found essential control keys there — volume, source, and mute – but, interestingly, no power key. That leaves the majority of control to Klipsch’s tiny remote, which will be the go-to control anyway. It’s certainly easy to navigate, but also very easy to lose track of. We think folks may miss a a digital display of some sort, too. Only a couple of LEDs are included to indicate source, Bluetooth pairing, or whether or not 3D mode — Klipsch’s virtual surround DSP — is engaged.

Having said all that, we don’t mind when manufacturers glaze over a few features in favor of putting money into sound performance. Further, while the R-10B doesn’t flash as many bells and whistles as some bars, Klipsch’s minimalist design shows moxie. We’ve suffered plenty of sound bars with a dozen DSP modes, none of which sounded right, while in contrast, the top-tier Paradigm Soundtrack offers little more than stop and go — and sounds damn good when the light turns green.

Under its speaker screen, the R-10B packs a solid collection of drivers, including dual 3-inch polypropylene cones, and a pair of ¾-inch textile dome tweeters, mated to Klipsch’s patented Tractrix Horns which you’ll find throughout the Reference line of speakers. The sub packs a side-firing 8-inch cone under its own robust screen. The two combine for a claimed frequency response of 27Hz-20kHz, powered by a claimed 250 watts of juice.

Other features for the 2.1 system include the aforementioned 3D mode for virtual surround sound, as well as Bluetooth connection with aptX for CD-quality sound from compatible devices.

We connected the system using the included Optical cable from the digital output of our TV, which offers the best combination of sound performance and functionality for most systems. Users could also connect directly to a Blu-ray player, or an AV receiver. As mentioned, there is no HDMI, which means that the bar won’t be able to decode the most advanced digital codecs such as DTS-HD Master Audio and Dolby Digital trueHD. Still, at this level, that’s a nominal issue that won’t be noticed by most ears.

No HDMI also means no ARC, however, which means that you can’t just plug the bar into your TV’s ARC connection and expect it to follow your TV remote’s commands. However, you can program the bar to follow basic functions from your TV remote like volume and power. One other noteworthy trait is that Bluetooth must be re-paired from your phone every time you want to play – something that can be a hassle, but also might be preferred for those with a lot of Bluetooth speakers (or a lot of people in the house who like to stream to the system).

We usually don’t start our system reviews off by singing the praises of the subwoofer, but in the case of the R-10B, the sub is just that good. The tidy little unit packs a serious punch of power down below, with a touch that’s potent, deft, and refined.

A distinctive X-shape carved out the bar’s metallic grill gives off a subtle superhero vibe.

Moving through our evaluation, the sub proved it was just as capable rendering heart-palpitating explosions with rigid force as it was at pulsing out the heaviest grooves from hip-hop and electronic tracks with smooth fluidity. Think of the R-10B’s subwoofer as a steel fist wrapped in velvet.

Throughout our evaluation, the sub blended seamlessly with the sound bar as it moved its way into the upper registers, offering pleasant depth to instrumentation like stand-up bass, and kick drums. It also lent plenty of weight to low cinematic effects.

For us, the sound bar’s midrange was its only weak point. The color was a shade too bright for our liking with dialog, and instrumentation like acoustic guitar and snare sounded a little tight and metallic. Still, the system didn’t let us down when pushed. The intro to Skyfall was as engaging as ever, showcasing plenty of girth to gunfire and collisions, and formidable depth to the splash into the river as Bond falls off the bridge.

The lighter midrange touch was easy to forgive as we familiarized ourselves with the R-10B’s treble performance, which provided crystal-clear extension far into the stratosphere. Those Tractrix Horns helped to create sparkling detail and lighting-quick attacks for cinematic effects, as well as upper register percussion. The system also did a great job creating a wide, open soundstage, with both effects and instruments popping up in well-defined corners that extended beyond its relatively narrow frame.

Star Trek: Into Darkness was a great vehicle for the R-10B to showcase its chops up top, firing vivid pulses from phasers, detailed clicks from control panel switches, and radiantly-defined wooshes of automatic doors. The ice ball clinking around in Kirk’s bourbon glass was a striking example of the bar’s ability to engage, even during otherwise mundane moments. Detail didn’t reach the nuanced level of the aforementioned Paradigm Soundtrack, but it matched or exceeded most bars we’ve evaluated at this price and above.

The new R-10B sound bar seems to epitomize the goal of Klipsch’s new Reference line, providing high-quality sound at a reasonable price. Thanks to its tall profile, the bar begs to be mounted, and also doesn’t offer a whole lot of extras. But if you’re simply looking for great value in sound performance, Klipsch’s R-10B offers a sweet blend of brute force and fluid clarity to make your home theater sing.