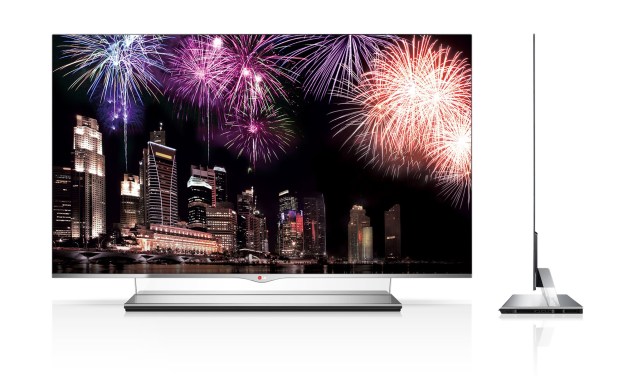 After a year of teasing us with prototypes of its gorgeous 55-inch OLED TV, LG has finally announced its much-anticipated 55EM9700 will begin shipping to South Korean customers sometime next month. Dates of availability outside of South Korea are not yet known, but the company has promised it will make that information available “over the next several weeks.” Something tells us we’ll find out when U.S. customers can expect to get their hands on the set sometime around 8:00 AM on Monday, January 7th, when LG is scheduled to hold its press conference at the 2013 International CES.

At just 0.16-inch thick and only 22 pounds, the ultra-svelte, bezel-less 55EM9700 is quite a looker, even when not turned on. Power up the display, however, and the resulting image is nothing short of breathtaking. We got about an hour of hands-on time with the EM9700’s predecessor (the EM9600) earlier this year, and we were stunned with the ink-like black levels and incredible contrast. Color, too, was eye-popping.

LG explained to Digital Trends that it put a great deal of effort into perfecting its version of OLED display technology, which might explain why we never saw the EM9600 ship last year. LG uses a white sub-pixel in addition to the traditional red, green and blue pixels in order to achieve what it says is the “the perfect color output.” When we spoke with LG in May of last year, it was clear that the company was convinced its technology was superior to that of its competitors, and acknowledged it might push the product back, though we don’t think it expected to miss its 2012 shipping target entirely.

Based on the images provided by LG, it appears that the company is sticking to its plans to keep the set’s electronics tucked away in some version or another of an external box. As seen in the image above, the electronics are built into the TV’s base, with a proprietary optical cable delivering image information to the panel. This, of course, allows the TV to maintain its exceptionally thin profile. No word from LG yet on whether a separate stand-alone box will be provided as an option for those who wish to wall mount the panel portion of the TV.

Pricing of the 55EM9700 in South Korea works out to be roughly $10,000, though we expect official pricing information and other vital details from LG at its press conference at CES next week. Check back with Digital Trends for the latest on LG’s OLED and 4K/ Ultra HD TV technology, both of which are expected to be featured prominently at the show.