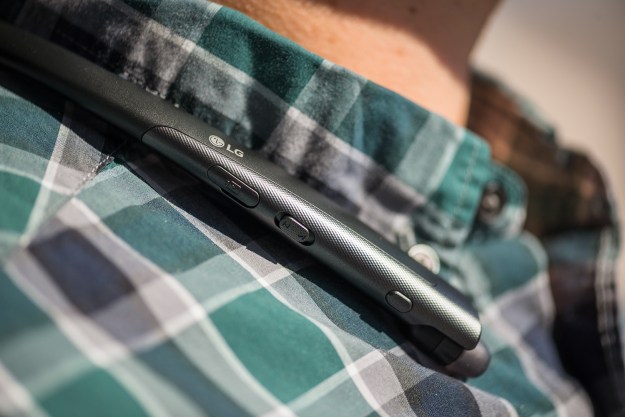 LG’s Tone wireless headphones have proved an impressive hit for the brand known best for its TVs and appliances. Utilizing a halo-band design with retractable earbuds, the Tone series’ popularity has spawned all sorts of iterations, from sports models to a pair with actual exterior speakers built directly into the band so you can bring a mobile jam session anywhere.

The latest pair, the Tone Platinum SE headphones, pack their own feature flare, including an impressive 13-hours of battery life and a dedicated button to dial up Google Assistant (and with it, Google Translate. It’s a tight little package, and thanks in part to acoustic tuning by Harman Kardon, the Platinum SE don’t skimp on performance, either. But at a whopping $200, the latest in LG’s aging Tone series have plenty of giants to slay — including a growing swell of fully wireless earbuds.

The Tone Platinum SE arrive in a simple, no-nonsense package with few accessories, save a triple pack of ear gels (which are extremely difficult to remove, by the way), a micro-USB charging cable (no fast-charging here), and a quick-start instruction booklet with

directions for setting up Google Assistant.

Getting the band together

Truth be told, yours truly isn’t a huge fan of the halo headphone design, but the Platinum SE do as good a job of it as any. A rubberized strip at the back makes the band somewhat malleable. Textured strips of silver at the front prongs offer some stick for your grip, and also look clean against the rest of the matte black chassis.

The weak points here have to be the tensiled cables, which extend out to allow each bullet-shaped bud to comfortably stretch to your ears, snapping back with a tug when the buds aren’t in use. You won’t want to play fast and loose with these spidery wires, but we were less than dainty with them in our testing and they never gave any signs of strain. One big miss is the lack of any IPX certification, meaning the headphones aren’t designed to withstand sweaty workouts or (for those of us in the North West) walks in the autumn drizzle.

On a brighter note, while the lack of USB-C means no fast charging, their battery life of “up to 13 hours” rates among the best in their class, and we didn’t have to charge them for days.

While most of the wireless headphones we review use just a couple of multi-functional buttons to control volume, song skip, etc., the Platinum SE essentially feature a button for everything. On the right prong’s interior is a power switch which sets the headphones to auto-pair, a toggle key for song skip, and the stand-alone Google Assistant key. On the left is a play/pause/call key, and a volume toggle key.

The Platinum SE aren’t designed to withstand sweaty workouts or those long walks in the autumn drizzle.

It’s thoughtful for LG to load up the controls, but it actually made it more difficult for us to master than headphones with fewer keys. With so many options, we found ourselves fumbling around and — more often than we’d like to admit — hitting the Google Assistant button when trying to pause or play music. After a while, we settled into the system but we still prefer fewer keys when it comes to controls we can’t see.

As for the buds themselves, LG employs a hybrid driver configuration, matching a balanced-armature driver designed to bring clarity and accuracy to the upper register with a traditional dynamic driver designed to offer more oomph down below. 1More’s Triple Driver and Quad Driver earbuds also utilize the increasingly popular mix-and-match design, though, as the name suggests, each of those models employ multiple armature drivers in the upper frequencies for more balance (more on that below).

Google for the assist

To be perfectly honest, this reviewer doesn’t really care much for Google Assistant (or assistants in general, for that matter). There’s still far too much Dalek and not enough Her involved.

Still, for those who enjoy the assistant world (which seems to be a lot of folks these days) the most highly touted feature on the Pixel Buds feels just as well utilized here. It’s quick and easy to get Google Assistant’s attention, and for its part, Google Translate works exactly the same, too. Of course, as we stated in our Pixel Buds review, Google Translate will work fine without earphones, but one-button access speeds up the process.

In a prominent picture on the Platinum SE’s box, LG claims its hybrid driver design provides “crisp treble” and “robust bass,” and we’ll be darned if that isn’t absolutely on point.

In fact, long before we’d read that pithy marketing speak, the first word that came to mind regarding the SE’s upper register was “crispy.” On the other end, the little buds do a good job of bringing some bump down below, offering firm and stable sub-bass that digs pleasantly into the lower register without interfering with the treble, resulting in clear and highly accessible sound signature.

For its part, the midrange is clean and detailed, if a little lighter in flavor that we’d like. This is the point where 1More would chime in about the importance of using multiple balanced armature drivers up top as opposed to just one to achieve a fuller sound. While it’s by no means a requirement, a driver each for the treble and midrange certainly helps the Triple Driver deliver. We were able to coax a bit more gravitas from the midrange by using the smaller eartips — never underestimate the importance of a tight fit — but still found ourselves wanting more there.

Thanks to that “crispy” driver, though, the SE serve up some impressive moments of detail; acoustic guitar and vocals are particularly lovely, handled with care for sweet and nuanced delivery, while bass guitar and brass are presented with presence and clarity.

We didn’t have to charge them for days.

Yet, the SE don’t quite reach the kind of fidelity we expect at the $200 price point. That’s partly a fault of the Bluetooth connection, which introduces a fair bit of signal noise when connected. You won’t notice it while you’re jamming out, but it is notable each time the buds connect, and adds some sonic smoke screen between your ears and the sound, keeping you at arm’s reach.

On that note, we wish LG would have sprung for Bluetooth codecs like aptX (for Android) or AAC (for iOS), the lack of which further relegates the sound performance to just pretty good for the price. You’ll enjoy your favorite tunes, and you won’t be wanting for the finer details, but you also won’t likely be finding any untrodden paths in the depths of familiar songs.

LG’s Tone Platinum SE offer sleek design, solid features, and detailed sound, but their price tag is a stretch in a wireless segment absolutely boiling over in options. Audio performance is respectable when compared to similar offerings, but you can get more sound for your dollars elsewhere — even in the pricey true wireless segment, $200 is far from a drop in the bucket.

There are so many available options, we could be here all day, but we’ll just drop a few instead. For some better performance chops, we recommend checking out Shure’s SE215, which offer a bit less battery life, but also cost less. Phiaton’s BT 150 NC also offer less battery than the Tone Platinum’s 13-hours (seeing a pattern here?), but swap in noise cancelling for a fair bit less cash. On the true wireless headphones side, Jabra’s Elite Active 65T give you total wireless freedom, great performance, and no band to break all for less than 200 bones.

This is a tough one, as headphones aren’t really designed to last forever, and we do have some concerns about those tiny wires. That said, the long battery life and solid feature set should keep these viable for a long time to come, provided you treat them well.

While there are tons of options at or below $200, if you’re looking for a solid pair of wireless earbuds with tons of battery life — and you aren’t the gym-rat type — LG’s Tone Platinum SE are certainly worth a look.

Topics
NAD’s CS1 adds wireless streaming music to any audio system
Bowers & Wilkins’ wireless earbuds get better battery life and longer range
Amazon adds audio personalization to Echo Buds 2
The best headphones for running in 2023
The best Bluetooth speakers for 2023: Marshall, Sonos, JBL, and more
Beats Studio 3 headphones are $120 off today at Amazon
Best 4K projectors for 2023
The best ultra short throw projectors for 2023
How to watch Puppy Bowl 2023
BluOS will be updated to 4.0 with a fresh look, new features
Samsung accidentally reveals price of its 77-inch QD-OLED TV
The best QLED TVs for 2023: bring on the brightness
The best OLED TVs for 2023: from LG, Sony, and Samsung