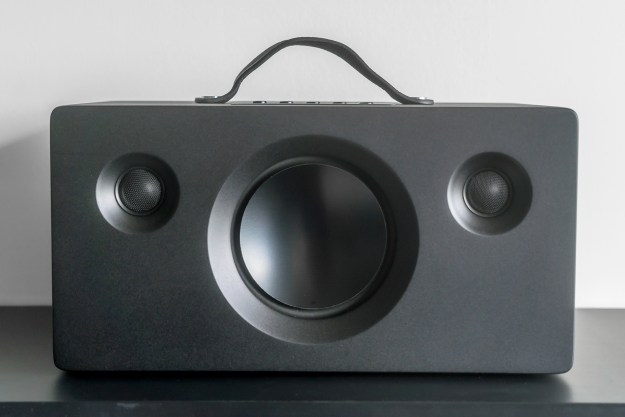 “Even if this speaker has to stay still, it will make sure a crowd doesn't.”

Finding a portable Bluetooth speaker that can get loud isn’t all that hard if you consider size as a barometer. The larger the tweeters, woofers, and amplifiers, the easier it should be to pump out tunes at louder volumes. Doing it for less money is what the $250 Monoprice Soundstage 3 Portable is all about.

This is a speaker capable of surprising people with its punch, producing a thick sound that you can take with you. We moved it around a fair bit ourselves to see just how much fun it can be when positioned in front of others.

The fully recyclable box is a pretty standard unboxing experience. Inside, you get the power adapter, 3.5mm audio cable, and user manual. Reading the manual is worth doing so you understand certain nuances I’ll cover further down. The safety warnings and guidelines section is full of tidbits, some obvious, others that you may not have considered.

Monoprice has never stood out for flashy aesthetics, and that’s pretty evident with the Soundstage 3 Portable. It looks like any other speaker could look, with few outward design cues that associate it with any particular brand, much less Monoprice. Still, it’s a pretty good-looking speaker, thanks to accent pieces, like the leather handle at the top buckled down for a nice touch.

It’s got some heft to it at just shy of 11 pounds, with dimensions of 13.6 x 6.9 x 7.3-inches. While certainly a speaker you can lug around, it’s not one you’ll want to carry around like a boombox. That becomes even more obvious over time based on the speaker’s design and functionality. For starters, this is not really an outdoor speaker. You can take it outside and entertain friends in your backyard, or take it for a day at the park, but it has no water resistance, nor was it designed to handle very hot or cold temperatures. Monoprice even warns against keeping it in direct sunlight for too long. Needless to say, it’s also definitely not a beach speaker. With exposed drivers, you do need to be mindful of what might come into contact with it, in spite of its otherwise hefty frame.

This is the kind of speaker that can fit in just about anywhere.

An interesting circumstance for a speaker that plays while sitting still connected to its power cord, or unfettered when the 8,800mAh battery is charged up. If you plan to keep this thing parked, you do need to charge the battery at least once every three months to keep it fresh. Not only that, but Monoprice built it so that you leave the power switch on in the back. Turn it off, and the battery won’t charge at all.

In total, the Class D amp powers the two tweeters and woofer to output up to 50 watts. The understated design doesn’t hide them behind grilles, and the openness grew on me as I kept using it, even though I’m admittedly not as partial, either way. This is the kind of speaker that can fit in just about anywhere, despite the fact that people will walk by without paying all that much attention to how it looks. It’s how it plays that truly matters, after all.

You do get a decent set of controls and ports to work with in the Soundstage 3. On the back, there are analog RCA stereo inputs, a Toslink digital audio port, 3.5mm Aux-In jack, a Sub-Out connector, plus a USB-A port to charge your phone or other portable device. While it would’ve been nice to see a 1/4-inch jack to plug in microphones or other components, you do still have workarounds for that if you wanted to use it as a PA system.

The speaker’s other ports certainly open it up to a turntable, mixer, laptop, or whatever else you might have in mind. Even plugging this into a TV is possible if you use the Toslink port. It can work with any subwoofer you can plug into the existing port here, too. Good options for an unassuming speaker.

Up top, a row of buttons makes things pretty straightforward. The power switch on the back is what keeps the speaker on or off, whereas the button at the top wakes it from standby mode. The pair button lets you initiate Bluetooth pairing. Volume is standard, and the source button lets you cycle through your available connection — both wired and wireless.

One legacy spec here is Bluetooth 4.2, which does limit range to a maximum of 32 feet — something that comes into play when using this outdoors with your phone in tow. The speaker also can’t stay connected to two devices simultaneously. If a second device connects to play something, it kicks off the first one. And if you wanted this to be a speakerphone for calls, that won’t happen. No onboard mics, so no way to talk to anyone.

What’s immediately obvious when playing anything on the Soundstage 3 Portable is how low the register is off the bat. With 30 watts of the 50-watt output coming from the woofer, and 10 apiece for the tweeters, it’s not all that surprising that it plays with a real thump.

The good news is that it doesn’t cannibalize itself because of it. Some speakers skew too far to the lows and muffle the mids or highs to deliver that same kind of rumble. The Soundstage 3 Portable doesn’t do that, producing bright highs and a solid mid-range that come through for a wide variety of musical genres. You could play something from Led Zeppelin or the latest Dua Lipa track and enjoy listening to both despite the very clear differences between them as far as their respective genres go.

Equally impressive was the speaker’s ability to not fall over a cliff with distortion at higher volumes.

Granted, Monoprice isn’t chasing after audiophiles with this speaker. It’s supposed to be a crowd-pleaser, not a sonic revelation. Stereo separation would’ve been better with dual woofers, but considering what this speaker was really designed for, I doubt a group of people listening to it would care all that much. If it gets anyone dancing because they’re feeling the sound coming out of it, that’s already a win for the Soundstage 3 Portable. When I played it for others, it got universally good feedback, with the bass as the standout feature. It may not rumble quite as much as, say, the Monster Blaster 3.0, but this speaker handles mids and highs with more clarity.

Equally impressive was the speaker’s ability to not fall over a cliff with distortion at higher volumes. Sound felt clear and crisp at 80% volume, which is already quite loud for this thing, and still sounded good at 90%. It won’t match the resonance of something like the Marshall Stanmore III, but its value proposition is the combination of audio performance, portability, and port options, the latter two of which aren’t available with the Stanmore.

Without an app and EQ, there is no way to tailor the sound. It’s also limited to the SBC Bluetooth codec, so not much leeway there, either. Even so, whether you’re just chilling to it at default volume or blasting tunes to entertain a crowd, the Soundstage 3 Portable does the job.

Monoprice rates battery life at 10 hours with 50% volume. That was pretty accurate in my testing, though you will raise the volume on it more often than not. At 60-70%, it tapped out at seven hours, which seems low for something this size. It’s low compared to other speakers, and solidifies the fact this is a portable speaker with somewhat limited range. You will generally need to find a place for it near a power outlet because it can just go for as long as you need it to while plugged in.

You can charge a phone or other portable device using the speaker’s battery or while it’s plugged into an outlet. Doing it while playing on battery power naturally reduces how long the speaker lasts until you plug it in or recharge, but it can be convenient, especially if you don’t have a free wall outlet to plug your device in.

The Soundstage 3 Portable is a fun speaker for what it does. It can be the speaker you use to listen to audio content at home, as well as one you can rely on to entertain guests. It doesn’t have the outdoor ruggedness others do, but you can get away with using it in your backyard, and that may be enough for what you need. As for the pool or beach, this probably isn’t what you need for those situations.

Looking at the Soundstage 3 Portable as both a stationary and portable speaker opens it up to varying competitors. One actually comes from Monoprice itself in the form of the Soundstage 3, a carbon copy of this one, save for the higher wattage, included remote control, and lack of battery power. Not to mention it only costs $160, so definitely a more affordable option. Another example would be the bass-heavy Monster Blaster 3.0 boombox, which is easier to carry around and lasts considerably longer on battery, yet doesn’t offer as much durability as you might expect. You can take it outside just about anywhere though, so there is that.

The Marshall Stanmore III is more expensive at $380, and won’t play without a power source, but it delivers excellent sound and has an app for some EQ tweaking. If you’re thinking you need to go bigger and louder with some portability in mind, then the Soundboks Go may scratch that itch. It costs $700, so it’s in a different price bracket altogether, but it packs the kind of punch other speakers simply don’t.

So long as you don’t get reckless with it, the Soundstage 3 Portable should last a long while. It has no IP rating whatsoever, and clearly is not built for any rugged pursuits. Keep it away from water and sand, especially. As noted earlier, you do need to recharge the battery at least once every three months to keep it fresh, in case you plan to keep the speaker plugged in the entire time. Monoprice’s one-year warranty covers functional problems, but not damage from the elements. It also offers a 30-day money-back guarantee.

Yes, because you do get your money’s worth. At $250, the Soundstage 3 Portable comes at a reasonable cost for what you get.

New Amazon Fire TV Omni QLED displays art, senses your presence
Amazon’s third-gen Fire TV Cube has great features the Apple TV is missing
Amazon adds spatial audio to the Echo Studio smart speaker
B&W’s flagship Px8 headphones cost way more than they were supposed to
Apple AirPods Pro 2 vs. AirPods Pro: What’s new?
How to reset Apple AirPods and AirPods Pro
How to get Dolby Atmos on Netflix
How to add an app to a Vizio smart TV
How to watch The Weather Channel without cable
Samsung just dropped a massive 98-inch Neo QLED mini-LED TV
LG prices its Flex, StanByMe TVs, and debuts a new model that doubles as magazine rack
How to hide a channel on YouTube TV
Audio-Technica is celebrating its 60th birthday with a $9,000 phono cartridge