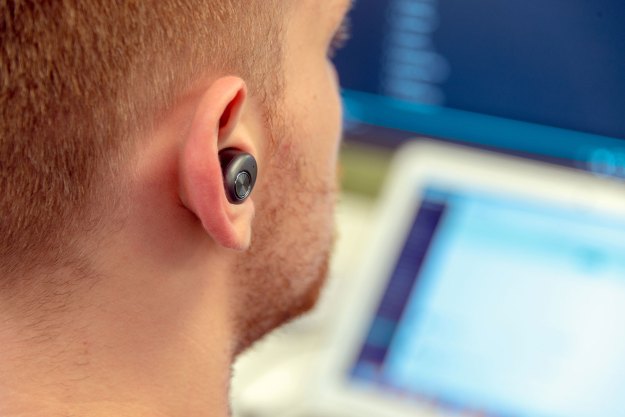 “With the ultra-cheap Monoprice True Wireless Earphones, you get what you pay for: Not much.”

The Fully Wireless Earphone Revolution is well underway at this point. Little Bluetooth-enabled, two-piece sets with dedicated charge cases are no longer a novel sight; in fact, there are dozens (if not hundreds) of non-name-brand offerings out there, with little variance in terms of features to separate them.

Evidently, California-based Monoprice — a huge ‘off-brand’ manufacturer with an admittedly spotty history when it comes to respecting patents —  recognized this and, as such, developed a crazy-affordable ($50) pair, called simply the True Wireless Earphones. After spending several hours with these bad boys stuck in our ears, we can’t offer an unqualified recommendation, but for the price, they’re not too shabby.

For the most part, if you’ve used one pair of fully wireless earphones (when we say “fully wireless,” that excludes any earphones with an around-the-neck style leash), you’ve used them all. Apart from some neat, unique tricks like the Apple AirPods’ automatic pause feature — which activates when you remove either AirPod from its cartilage home — or the litany of biometric sensors you’ll find in options like the Bragi Dash Pro, differences in design trend more toward granular than groundbreaking.

The True Wireless Earphones — TWE from here on out — aren’t here to blow your mind with futuristic tech. At $50, that’s not what we hoped for anyway. The headphones arrived in a nondescript black cardboard box with minimal silvery product info on the bottom and this logo (minus the numbers) on top. Inside, there’s a micro-USB charge cable and some light product literature.

The earphones themselves are nestled in their oval charge pod, which is about 2 x 1 x 1 inches, with a brushed aluminum finish on the bottom half and a hinged, slightly translucent lid on the top. The TWE buds are gunmetal gray, perfectly symmetrical, and identical in every way except for the “L” and “R” markings on the inside. The earphones snap nicely into the case and stay there — it doesn’t matter which earbud goes in which hole, because everything is perfectly symmetrical. (Same goes for wearing the earphones; the left bud is the “master” and the right is the “slave,” though, which you’ll figure out quickly if you try to stow the left while the right is playing.)

The TWE automatically power on when you pull them out of their case — they’ll enter pairing mode the first time, which is nice — and off when returned to their resting place. This is a nice touch, though you might want to wait a few seconds before inserting them, lest your ears get assaulted with audio cues (“Power on!” Beep! “Connected!” “Left channel connected!”). The headphones are quite comfortable, especially considering their symmetrical design, fitting snugly into our ears and never causing discomfort.

They’ve each got one large, silver button on the back; this controls playing, pausing, skipping forward tracks, and dealing with phone calls. To adjust volume or select tracks with more control, you’ll need to use your connected device. We did experience a bit of lag when using the buttons, sometimes causing audio to build up and release all at once, like when a video stream buffers and then awkwardly rushes to catch up.

Monoprice advertises about three hours of battery life per charge; this was reflected in our testing, though there’s no real way to tell how much juice is left. We also don’t know exactly how many charges the case is supposed to hold, as the product page is almost impressively sparse.

Frankly, we expected these headphones to sound awful. After all, finding decent, fully wireless buds at the $100 price point is tough, let alone at $50.

In some ways, our fears were affirmed. Any audio playback through the TWE is accompanied by a slight digital signal processing (DSP) hiss, which can be distracting depending on your level of sensitivity. The headphones’ Bluetooth signal shielding is poor, causing the signal to cut in and out regularly while listening in the office (this affected the right “slave” bud more, and largely disappeared when listening at home).

The headphones are quite comfortable, fitting snugly into our ears and never causing discomfort.

When music did play without interruption, percussive instruments and electronic bass often caused crackling distortion, especially at higher volumes. This wasn’t always the case — Illenium’s Afterlife sounded pretty great, and the crackling actually seemed to add something to Lana Del Rey’s Young & Beautiful, like something out of an old film reel — but some tracks, like Porter Robinson’s Sea of Voices, absolutely fell apart when the bass kicked in.

Everything sounds as if it’s covered in a thin layer of plastic-y film, obfuscating vocal clarity and taking the shine off live instrumentation.

In short, you’ll hear music, but you won’t be thrilled by it. While fine for podcasts and phone calls, you’ll probably find yourself wanting more from you music if you care at all what it sounds like.

Monoprice offers a 1-year replacement warranty and a 30-day money back guarantee for all its products.

Frankly, we were never surprised or dismayed at the headphones’ limitations. When you pay $50 for fully wireless earbuds, you shouldn’t be anticipating crystal clarity or balanced bass. If you truly care about how your music sounds, don’t buy these. If you can’t afford to spend more than $50 on headphones, you can’t afford to nitpick too hard. Try one of these instead!

As a compact, slick backup pair, though — or, perhaps, a stocking stuffer for a child who wants to go fully wireless — they’re a decent buy.

As mentioned, dipping under the $100 mark puts you in uncharted (read: crappy) territory when it comes to fully wireless earbuds. The oddly-shaped Smartomi Q5 are respectable (at just $40!), but right now, you won’t find any name-brand options at such a low price.

Physically speaking, both the earbuds themselves and the charge case feel sturdy. From a sound quality perspective, they’re already bad, so age won’t do them any favors, but we don’t expect much (if any) degradation.

If you’re dead set on getting some fully wireless earbuds on the cheap, these fill that need. We don’t recommend them, though.