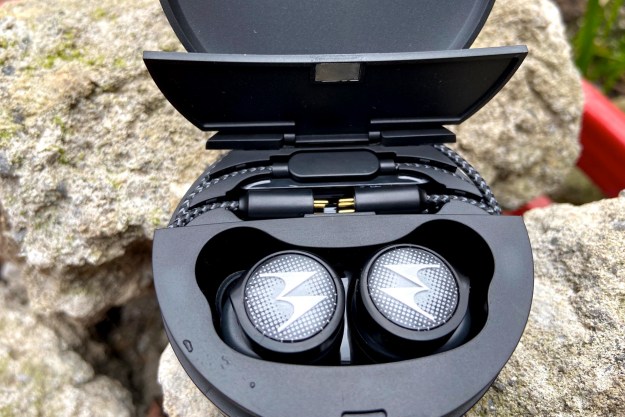 “A clever hybrid design takes them from wired to true wireless in seconds if you're OK with average sound.”

In both cases, the fear of running out of juice can be called range anxiety, provided you’re willing to equate miles driven with hours of playback. It’s this range anxiety that makes the $100 Motorola Tech3 true wireless earbuds so interesting. With a literal plug-in hybrid design that lets you convert them into a wired set of earbuds, they’re the perfect antidote to wireless range anxiety.

But do the benefits of the Tech3’s 3-in-1 design outweigh its disadvantages? Let’s take a closer look.

Wrap your head around this design

You can tell the Tech3 aren’t like other true wireless earbuds the moment you set eyes on their charging case. It looks like a really big black yo-yo. That’s in part because of its squat, cylindrical shape, but the comparison becomes almost unavoidable due to the two sets of braided cords that wrap around its midsection.

The braided cords don’t stretch or deform at all, snapping into their slots the same way every time. It just works.

Flip open the makeup-compact-style lid and you’ll find the earbuds neatly stowed in their own charging nooks. Flipping up a second smaller lid within the main compartment reveals the ends of one of those braided cords. This is the one you’ll use to physically connect the earbuds in their “sport loop” configuration.

The second cord — the one that magnetically attaches to the sport loop for wired use — is accessed from the bottom of the case. The arrangement reminds me of decades of attempts to neatly store wired earbuds by wrapping them around all kinds of objects. Those were almost always a total mess, but the Tech3 manages to bring order to the chaos thanks to one important difference: The braided cords don’t stretch or deform at all, which means they wrap around their case and snap into their respective slots the same way every time. It just works.

The only problem with this design is its size. Unlike most of today’s true wireless earbuds, you will not be able to comfortably pocket the Tech3’s case. Some folks may also be annoyed by the micro-USB charging port, a format that has all but disappeared from newer phones (including Motorola’s latest models, ironically). There is a charging indicator light on the front, but it’s tiny and very difficult to see.

When I first saw the press images of the Tech3, I feared that the ability to plug in the sport loop cord would mean big, bulky earbuds. Amazingly, the buds aren’t any bigger or heavier than non-hybrid models, and they’re actually smaller than some — Amazon’s Echo Buds are chunkier.

The plastic plugs on the ends of the cord create a barrier to how deeply you can insert the earbuds into your ears.

They’re also quite comfortable. I tend to have good luck with the default medium-sized ear tips on most earbuds and the Tech3 were no exception. I was able to get them nestled firmly yet comfortably in my ear and they stayed comfortable for several hours.

Despite the fact that you can plug in the sport loop without sacrificing size or comfort, there is a pretty major flaw in the design. The hard plastic plugs on the ends of the cord create a physical barrier to how deeply you can insert the earbuds into your ears. For me, this meant that the natural drag exerted by the cord over time had a tendency to loosen the buds.

There’s a reason virtually all neck-loop-based earbuds use some kind of ear-hook or ear-fin — you need to stabilize the earbuds against this tugging. Unfortunately, the Tech3 do not come with either built-in or the optional slip-on kind of ear fins you find on some models. This seems like an odd oversight for earbuds that are meant to be used tethered and during vigorous exercise. On the bright side, with IPX5 water resistance, they’ll be able to deal with the kind of sweat that vigorous exercise tends to produce.

At $100, the Motorola Tech3 are at the high end of the affordable side of the true wireless earbud market. Given its fancy hybrid design, you might expect that some sacrifices were made in the audio department, and this is true: They do not deliver the same audio quality as the similarly-priced 1More Stylish.

That said, they deliver very good clarity and precision, with a surprisingly neutral EQ. In this price range, earbuds tend to overcompensate on bass, or they fail to deliver a satisfyingly full midrange. The Tech3 don’t suffer from any of these drawbacks, making them one of the better choices for those who like their music presented with a minimum of sonic alteration. Vocals are especially well represented and even though bass-heads will find themselves wishing for more low-end oomph, most genres actually benefit from the Tech3’s sound signature.

Another area where the Tech3 cut a few corners is their features. You get the standard set of controls: Play/pause, track skip forward/back, and call answer/end. You can also access your phone’s personal assistant or talk to Alexa if you install the free Verve Life app by Hubble. This app will also let you track the last known whereabouts of the earbuds should you lose them.

But there’s no volume control, no hear-through mode (sometimes known as transparency mode) to let outside sounds in, and there is no ear sensor so when you remove one or both buds, the music keeps playing instead of pausing automatically. And considering there’s a companion app, it’s a shame it doesn’t give you an equalizer feature, too. The controls themselves are quite responsive to taps, though as we’ve seen on other touch-sensitive earbuds, there are times when you inadvertently tap (and stop playback) or tap twice and the bud fails to register the second tap.

Not built for noise

Call quality with the Tech3 is a bit hit or miss. Overall voice quality is very good, but your callers won’t appreciate it if you’re in a busy environment.  There’s virtually no noise-canceling; a light breeze sounded like a wind storm, and a dog barking more than 50 feet away sounded like it was right next to me. It’s a subtle reminder that the Tech3 belongs to a portfolio of products that bear the Motorola brand but are not made by either Motorola Solutions (the original Motorola company) or by the Lenovo subsidiary that controls the mobile phone business. Instead, these earbuds are made under license from Lenovo by Binatone, a Hong Kong-based electronics manufacturer.

Rated for seven hours between charges, you might never need to use that plug-in cord.

Yes, the Tech3 have been designed to offer unlimited playtime via their hybrid design, but that doesn’t mean they don’t have decent battery life. Rated for seven hours between charges, I actually got more than 7.5 hours out of the right earbud, while the left gave up at just under seven hours.

Even their fast-charge feature is better than I’d expect, with three hours of playtime after 15 minutes. With only about 1.5 charges in the case (for a total of 18 hours) you might never need to use that plug-in cord.

Using the two cords to go from fully wireless to fully wired only takes a few seconds. The trickiest part is lining up the triple-prong gold contacts on the ends of the sport loop with the corresponding ports on each earbud. There is a set of white markers to help, but it takes some precision, not to mention good eyesight.

An obvious issue with this arrangement is that those contacts could loosen over time, much like headphone jacks themselves tend to do. It’s a risk, for sure, but I can tell you that at least when new, the fit is tight and very secure. No amount of gentle tugging can budge them at all.

When connected via the magnetic headphone cable, the earbuds automatically power down, and they sound just as good if not better than when used in wireless mode.

The Motorola Tech3 concept provides a unique solution to a problem we’re not convinced a lot of people have: How to use your true wireless earbuds with a headphone jack. At $100, it’s not an expensive solution, but you’re forced to give up a lot to benefit from its flexibility.

If great sound matters to you and your budget can stretch a bit, you can actually get a very similar solution from the Shure Aonic 215. They aren’t as elegantly packaged as the Tech3 and have their own drawbacks, but they’re way more flexible.

If great sound matters to you but $100 is your limit, check out our list of the best cheap true wireless earbuds. None of them possess the Tech3’s clever hybrid trick, but many offer more features and better sound. Finally, if battery life is your biggest concern, for an additional $29, you can’t go wrong with Samsung’s amazing 11-hour $129 Galaxy Buds+.

The construction of the Tech3 earbuds and their charging case is good, but not great. They’ll probably survive several years of use if you don’t abuse them. The two cables are very well made, but it’s impossible to tell how many times you’ll be able to plug them into the earbuds before that connection fails.

Unless you absolutely must have the ability to plug your true wireless earbuds into a phone or computer, or you live in constant fear of your battery dying, we think you should skip the Tech3. That said, if you do value their key feature, they’re not a bad set of .

The best noise-canceling headphones for 2022
Best headphone deals: Save on Beats, Bose, and Sony
The best soundbars 2022: which should you buy?
Spotify Wrapped 2022: what it is and how to view it
The best romantic comedies on Netflix (December 2022)
Best headphones for 2022: Sony, Bowers & Wilkins, and more
The best TV brands of 2022: from LG to TCL, which should you buy?
The best home theater projectors you can buy in 2022
Looking for a big TV? This 75-inch TCL is $500 at Best Buy
1-day flash sale drops the price of this 70-inch TV to $400
The best 4K TVs for under $500: premium picture on a budget
The best comedies on Hulu right now
The best sci-fi movies on Hulu right now