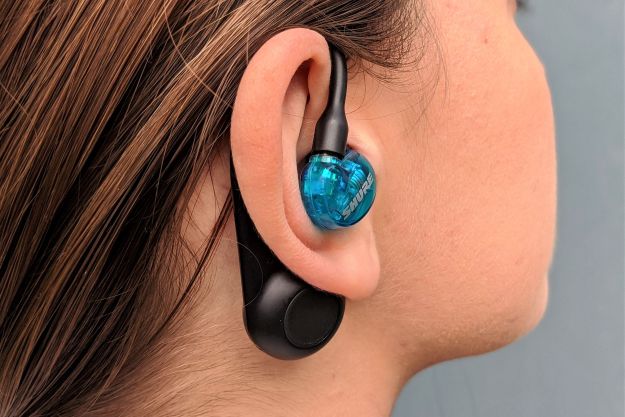 “The Shure AONIC 215 are comfortable and have smooth sound, but few features.”

If Shure’s mission with its Aonic 215 earphones was to create something strikingly different than the popular competitors in its field well, mission accomplished. The audio company’s new $230 true wireless buds set themselves apart from the masses, which is exemplified by everything from their design and fit to the package they come in. But is that a good thing?

I wish I could bluntly answer with a yes or no and storm out of the gates with a declaration about how much better or worse these earphones are due to their comparative uniqueness. But with the Aonic 215, it’s just not that simple.

Editor’s note: The Shure Aonic 215 were originally priced at $280 in April 2020, but Shure has updated the cost of the product “in an effort to meet the expectations of consumers,” and to offer the earbuds at a more competitive price point. The prices in this review has been updated to reflect that.

I wouldn’t go so far as to call it an industry standard, but there’s a certain perception in regard to the package a set of earbuds come in. Usually, but not always, it’s small and square.

Enter the Aonic 215 earphones, enclosed in a large, circular package, as if they’re trying to set the tone immediately. Lifting the lid reveals the earphones, resting on a foam bed with their charging case sitting in the middle of the pair. Also in the package: A micro-USB-C charging cable, an assortment of replacement ear tips (I swapped the foam tips that came with the buds for a pair of smaller soft flex tips), and a quick start guide, which was, in adherence to a growing trend here, circular.

The Bluetooth pairing process was the lone segment of the initial setup that mirrored other earbuds. The Aonic 215 should automatically enter pairing mode when you turn them on, and you should be able to find them easily in your phone’s Bluetooth settings. If they don’t, Shure included a manual option to get connected. I didn’t need it in pairing to my smartphone, but it was nice to know it’s there as a fail-safe.

The ear hook style of the Aonic 215 means the earphones have a larger footprint than, say, the Samsung Galaxy Buds+. They are, however, pleasantly light and comfortable, at least after you briefly fiddle with fitting the stems of the buds behind your ear.

The part of the earphones that actually sit in your ear — which was a teal-ish blue for me, but are available in black, white, or clear variations — are unobtrusive to the point that you could forget they were there, if not for the rest of the earphones clinging to the backs of your ears.

Which brings me to the hot-button issue here. The design of ear hook style earbuds is somewhat polarizing. Some people love them, some can’t stand them. I had always considered myself to be aligned with the latter since most I’ve used were heavy and made my ears feel cramped. The Aonic 215 are just the opposite.

Plus, their style suits an on-the-go lifestyle. I didn’t experience a single shift while wearing these on a jog through the park, whereas traditional earbuds have failed to stay in place on more than a handful of occasions.

The case is the outlier in terms of design. Most earbuds have adopted a compact, pill-adjacent look for their charging cases, but the Aonic 215 reside in a circular case closer to the size of a wallet. It’s not an inconvenient size by any means, but it’s not as pocket friendly as other models available.

When compared to other earbuds in (and below) their price range, it’s hard to look past how lacking the Aonic 215 are in the features department. To be clear, the features they do have are solid. But it’s 2020. For $230 earbuds to omit sought-after skill sets like active noise cancellation is a mistake.

Shure says the Aonic215 come equipped with sound-isolating technology that blocks up to 37dB of noise, as well as an environment mode that pipes in noise from your surroundings, and both of these did work well in my experience with them. But the active noise cancellation featured in products like the Sony WF-1000XM3 and the Sennheiser Momentum True Wireless 2 ia superior.

The Aonic 215 are supposed to last up to 8 hours on a single charge, with three additional charges built into their carrying case. Those specs checked out in my time testing them. But, unfortunately for Shure, the bar has been raised. When the Samsung Galaxy Buds+ can last up to 11 hours for half the price, I found myself wanting more — especially from a pair that doesn’t have ANC to bog down playback times, as is the case with both the Sony and Sennheiser.

I didn’t have connectivity issues thanks to the Bluetooth 5 tech built into the Aonic 215, except for a couple of times when my phone connected to the earphones but wouldn’t play media through them. I am working with an older phone in a Google Pixel 2, though, so that may be more Google’s fault than Shure’s.

My biggest functionality concern with the Aonic 215 centers around a very basic feature. The buttons, located at the bottom of each earphone, work well for what they’re designed to do. It takes a firm poke, but you can effectively play and pause music, answer and end calls, turn environment mode on or off, or activate your voice assistant. What you cannot do, which is frankly baffling to me considering the price, is adjust the volume or toggle between tracks. These are very simple commands, ones that you don’t realize you dearly miss until you’re forced to jog through an entire Pitbull soundtrack.

Shure does have a feature that’s fairly unique to other earbuds at this end of the market — a modular design with detachable connections. Shure says that listeners can switch between wireless and wired as long as you have the proper accessories to do so. More importantly, the ear hooks on the earphones — known as the Secure Fit Adapter — can be purchased separately to make other compatible Shure earphones truly wireless.

I didn’t have other Shure earphones to try this out with at the time of my initial review. But the ability to turn other earphones — like the $999 SE846, the $349 SE535, or the $199 SE425 — into a wireless version of themselves is a significant selling point for existing Shure enthusiasts. The Secure Fit Adapter does come at a fairly hefty cost ($179) on its own, though.

Shure has been in the audio business for nearly a century and has a product line ranging from budget options to price tags only an audiophile could love — this is a company with a proven track record of creating great sound, from microphones to headphones.

After extensive listening with the Aonic 215, I can confidently say these earphones live up to the pedigree of their brand. They’re remarkably clear, and some of the more well-balanced buds I’ve dealt with. Testing with a wide range of genres produced plenty of head-bobbing, to the point where I put songs like the Red Hot Chili Peppers’ Under the Bridge on a loop, just because it sounded so crisp.

From my perspective, these are not well-equipped for great low-end. They’re serviceable, but with songs like Brothers Osborne’s Rum, where a deep note acts as the backbone of the entire track, I found the bass to not be as authoritative as I’m used to. The equalizer on the accompanying ShurePlus Play app helped, but it wasn’t a miracle worker.

Call quality was exceptional. However, Shure only supports mono sound with calls, meaning I had audio just in my right bud. It’s not a deal-breaker by any stretch, but it’s worth noting.

Do these sound better than the Sennheiser Momentum True Wireless 2? In a word, no. Is that a fair comparison? It shouldn’t normally be, but that’s the kind of weight class the Aonic 215 is fighting in thanks to their cost. Do they sound better than cheaper alternatives like the Galaxy Buds +? Absolutely, though I’m not sure the average listener would be able to say they sound twice as good.

With the Aonic 215, Shure made a pair of comfortable, smooth-sounding earphones that are easy to grab and go with. But, considering everything similarly priced competitors have to offer, they dropped the ball in the features department.

Yes. The Sony WF-1000XM3 are the same price at $230, and while they may be a bit older, they offer better features. So do the $299 Sennheiser Momentum True Wireless 2, and they’re our pick for the best sounding true wireless earbuds. If you’re already looking to spend in the ballpark of the Shure earphones, it’d be worth making the extra $20 jump to the Sennheiser.

Shure isn’t closing in on the 100-year mark by making products with short shelf lives. Expect these earphones to be durable and ready for the long haul.

Only if you’re specifically looking for ear hook style earphones with great sound. Otherwise, there are better buds out there, often at much better prices.

Topics
The best OLED TVs for 2023: from LG, Sony, and Samsung
The best QLED TVs for 2023: bring on the brightness
BluOS will be updated to 4.0 with a fresh look, new features
The best ultra short throw projectors for 2023
How to watch Puppy Bowl 2023
Samsung accidentally reveals price of its 77-inch QD-OLED TV
The 50 best movies on Netflix right now (January 2023)
The best movies on Amazon Prime Video (January 2023)
The best new shows to stream on Netflix, Hulu, HBO, and more
The best TV shows on Amazon Prime right now
Best new movies to stream on Netflix, Hulu, Prime Video, HBO, and more
The best shows on Peacock right now
The best thrillers on Netflix right now