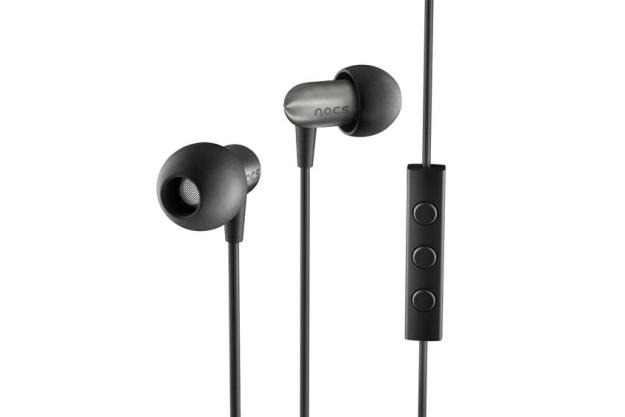 “We think that the Nocs NS800 Monitors are a special kind of treat for the ears. But, in the same way that not everyone enjoys caviar – at least not right away – some may have difficulty appreciating the NS800’s distinct flavor.”

The NS800 are the first go at a balanced-armature headphone for the folks at Swedish headphone maker, Nocs. Balanced-armature headphones have a distinct sound that finds favor with a certain set of listeners and seems well suited to NOCS’ flavor of sound. NOCS founder and CEO Daniel Alm told us he chose to go the balanced armature route because he “wanted to offer a more realistic and natural sound for music lovers.”

That makes sense to us, but the NS800 have a lot to prove. Nocs NS400, which we reviewed last year, are already a great-sounding set of earphones. With the NS800, Nocs has doubled the model number and the price, which is now $200. But do they sound twice as good? Let’s find out.

The NS800 monitors are packaged in an unassuming black box with a graphic of the earphones on the front and a small, clear window on the rear showing the NS800 — sans eartips — nestled in foam cutouts.

Along with the NS800 we found a low-profile, suede leatherette zipper pouch, an airline adapter (yes, they’re still useful for frequent travelers) and two pair each of three different eartip sizes.

The NS800 Monitors’ miniscule housing is crafted from stainless steel, which has a darker, more subdued sheen than the titanium housing we saw with the NS400. According to NOCS, the cord is reinforced with Kevlar to enhance durability. Still present is NOCS’ three-button cable which we like a great deal due to its well-spaced buttons, tactile feedback and close proximity to the jawline.

Of course, the real magic here is that balanced armature we mentioned earlier. For those not familiar, a balanced-armature is a different kind mechanism for creating sound. Where most in-ear headphones use drivers that are essentially tiny versions of the kind of speaker we are used to seeing, a balanced armature is a…well, it’s like an arm, with one end positioned between two fixed electro-magnets and the other attached to a diaphragm which, when moved by the shifting polarity of the magnets, makes sound.

Watered down techno-talk aside, the idea is that a balanced-armature driver comes with some advantages: it requires less power, exhibits less distortion and is lauded for being highly accurate. On the down side, some have criticized balanced armatures for putting out less bass and lacking “warmth.”

The validity of the notion of break-in – AKA burn-in – with reference to audio equipment has been hotly debated among audio enthusiasts for ages. To make things more complicated, there are many who believe that balanced armatures, by nature of their physical properties, aren’t in a position to benefit from break-in, regardless of whether the notion has any merit.

To take this a step further, some (including myself) would argue that it is the human mind which must be broken in. Think of it as a relaxing of the “ear muscle”, a process by which our sensitivity or desensitization to certain audible frequencies is either calmed down or ramped up, respectively.

All of that to say this: The NOCS NS800 Monitors sounded dramatically different after about 60 hours of use. One afternoon, after several days of listening and letting the NS800 work out on their own, we picked up the earphones, put them in our ears, and they sounded very, very different. Low bass response was clearly more distinct, but the entire earphone had a less aggressive approach and the earphones became just that much more enjoyable.

Say what you must about break-in and balanced armatures, but we will stick to our recommendation of letting the NS800 get a healthy workout before passing final judgment.

These in-ear headphones are about as comfortable as it gets. Thanks to a lightweight housing and ultra-compact size, it’s easy to forget you’re wearing the NS800. We had no problem wearing them for 5 to 6 hours at a time without needing to take them out. We even fell asleep with them in our ears at one point and woke up with no discomfort.

Because of the way the NS800 reproduce treble, you might be inclined to say that they put an emphasis on the high frequencies — but that wouldn’t be accurate. The NS800 do tend to draw your attention to the highs, but that is because the tonal color that you get from treble-intensive instrumentation is distinctly different from what most folks are used to hearing and is easily discernible. That’s just the balanced armature doing its thing.

It’s a rare occasion that we are even remotely impressed with the way headphones resolve the complex character of cymbals. Too often, these hand-hammered, carefully crafted metallic percussion instruments lose their personality during playback and wind up sounding more akin to cheap garbage can lids than the works of art they really are. The Nocs NS800 put some of the art back into cymbals by deftly resolving attack and decay and reproducing with accuracy the color of each cling, clang and splash, be it bright or dark.

We also had a special admiration for the way the NS800 handled the dense overtones involved with brass instruments. There’s a texture to the way brass sounds when heard live that is really tough to reproduce. If it isn’t a low quality MP3 sucking the life right out of the trumpets and trombones of a big band, it’s a headphone doing a poor job of reproducing a recording. But when the NS800 get busy reproducing a high quality track that bursts with brass and wind instruments, the effect is dazzling. We could feel the horns as well as we could hear them.

Since the NS800 have such a distinct high-frequency flavor, we were a little concerned that they might somehow unnaturally color vocals. But the NS800 exceeded our expectations. In fact, the earphones’ treatment of voices was strictly faithful to the recording, adding nothing that they shouldn’t while serving up each and every nuanced pitch inflection and mouth-noise with startling clarity.

Those looking for a detailed and dynamic in-ear headphone will be hard pressed to find a product that blends those two sonic attributes much better than the NS800. And distortion? The NS800 won’t be bringing that to the listening table unless you force them to by demanding ear-splitting volumes backed by too little power.

A favorite track by Keb Mo managed to show off all the aforementioned qualities within its first 45 seconds. “Soon As I Get Paid” comes from Martin Scorsese Presents The Blues: Keb Mo and is a feast for the ears from the downbeat. It starts with Mo unaccompanied on acoustic guitar with a rambling, almost clumsy blues riff. Here we could very easily hear the combination of nylon and steel strings on Mo’s guitar – subtleties which have been much more difficult to pick up on with most of the earphones we’ve tested this year.

As the laid back guitar riff rounds the corner of the song’s form, the drummer comes hauling in on his snare before bringing the rest of the band in for the first chorus. The snare sounded dry and huge with tons of woody clank as the player smacked his stick on the steel rim. This, we expected; but what we’d never heard before was the drummer vocally counting in his own entrance, buried waaaaaay back in the mix on the left channel. That’s the first time we’ve heard it, and any time we get to hear something new, it’s a very good sign.

But what about bass? Given that bass is the balanced armature’s fabled nemesis, how do the NS800 fare? Well, if you’d asked us during the first few days of evaluation, we’d say they left us wanting for more. But, in time, we came to find that the NS800 can deliver some pretty poignant lows when called to do so and, ultimately, we wound up wholly satisfied. Maybe it was the break-in time, or maybe we just relaxed into the headphone, tuning into what right there for us to hear rather than have it ram-rodded down our ear canal. Whatever the case, we are pleased as punch with the NS800’s bass response — but we’re not convinced everyone will feel that way.

As much as we enjoy the NS800 (they have become a personal favorite of this reviewer) we’re not convinced that they are the right choice for everyone. Those that enjoy natural-sounding, organic recordings — be it folk, jazz, old-school funk and R&B, bluegrass, classical…you get the idea – will have a hard time not falling in love with the NS800.

Those that prefer highly-charged, predominantly electronic music, however, probably won’t be as enamored with the NS800. We checked out “Step On My Trip” by artist Dub FX and were quickly turned off by the harsh treatment of manufactured digital instrumentation and a lack of visceral sub-bass.

We think that the Nocs NS800 Monitors are a special kind of treat for the ears. But, in the same way that not everyone enjoys caviar – at least not right away – some may have difficulty appreciating the NS800’s distinct flavor. The kind of sound the NS800 offer is going to be an acquired taste for some. If you don’t enjoy it now, come back and talk to us in about five years.

We feel the additional expense of employing a balanced armature is worthwhile. With that said, there is some pretty stiff competition at this price point. The similarly priced Etymotic HF3, Monster Gratitude, Klipsch Image X10i, and Sennheiser IE6 are all excellent options, and offer unique sound signatures of their own. But the NS800 can hang in there with the best of them and their superior comfort helps put them over the edge. As such, they receive an 8.5 rating and our Editor’s Choice award.

The best movie soundtracks of all time