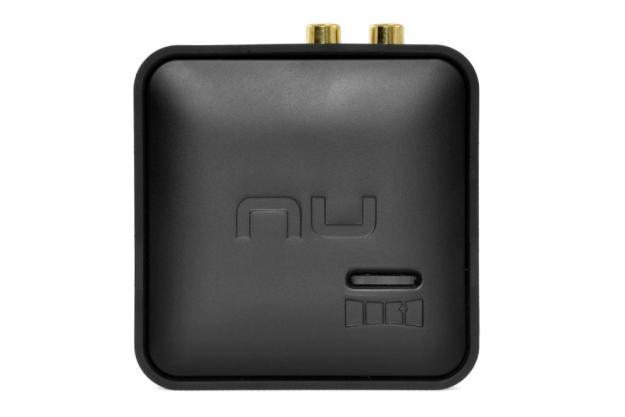 “We liked that the Nuforce Air DAC system sounded much better than Apple’s AirPlay option and that it even compared favorably to a typical wired connection.”

Nuforce’s line of compact and portable products have been getting some good coverage from us lately and rightly so: The company seems to have a knack for making easy-to-use and cleverly designed audio gear that sounds as good as they look; and the Air DAC certainly fits this description. It’s a wireless audio transmitter and DAC system designed to provide better sound from your computer or Apple mobile device when streaming audio to a receiver or powered speakers.

We’ve taken Nuforce to task before for poorly packaged products, but we won’t need to do so here: The Air DAC came packaged in a sturdy, graphic slipcase-covered box commensurate with the item’s price and quality level. Once we opened the box we found two felt-lined trays inside, each one holding the DAC receiver module and USB transmitter.

We also found a wall-wart style AC adaptor for the DAC unit and user manual inside the box. Note, however, that Nuforce doesn’t include any sort of interconnects to connect the DAC to your system, so be sure to have the appropriate cables on hand. Nuforce also sent us a separate blister-packed transmitter and charging cable for Apple mobile devices.

The Air DAC system comprises three components: two transmitter options for streaming audio, and one module to receive it. The uTX is a small, flash drive-sized transmitter for use with USB ports, and the iTX is an even smaller, mini transmitter about the size of a stick of gum, intended for Apple mobile devices such as iPods, iPhones and iPads. Each transmitter streams a digital audio signal to the Air DAC receiver module which then converts the digital bits into analog sound. The sound is routed to a suitable amplifying device via RCA type output jacks.

The Nuforce Air DAC system works on the new, Skaa wireless standard and HPX compression codec said to deliver full bandwidth, 16-bit/48 kHz quality sound with minimal latency and interference. Another benefit of this protocol should be ease of use, since no setup, software, or pairing is required. Each transmitter can send audio to four receivers, and each receiver can connect to as many as four transmitters. The Air DAC receiver can also automatically detect a transmitter’s signal that’s moved into the same room when used in a multi-unit configuration.

Using Nuforce’s Air DAC system couldn’t have been any easier. Once we hooked up the appropriate receiver/transmitter pair and started up the music, the Air DAC receiver instantly locked onto the signal, streaming music to our A/V system in a matter of seconds. Since no Wi-Fi or network connection is needed, Nu Force’s Air DAC is literally a plug ‘n play device, and certainly among the easiest wireless streaming solutions we’ve tried yet.

We were also impressed with the sound of the Nuforce system. Regardless of whether we used the Air DAC with the iTX or uTX, both combos sounded noticeably better than the same files played back via Apple’s AirPlay system. The Air DAC had a smooth, even-handed tonal balance with good depth and imaging, while AirPlay seemed to strip away most of the music’s harmonic content and transient information.

Perhaps the most notable improvements we heard from the Nuforce gear though, was in the music’s lower registers. Listening to various tracks from Caribou’s bass-heavy and dance-friendly album “Swim,” we really enjoyed the Air DAC’s deeper, weightier bass and fuller mids. The Nuforce system seemed to bring back all of the woofer-pumping goodness that went missing via AirPlay, making it easier for us to just relish in and feel the music. From there we listened to everything from classical to hip hop to more rock and got the same results every time. The Air DAC simply laid a better rhythmic foundation overall, constantly driving the music forward.

Vocals and other midrange sounds were also better developed via the Air DAC. Listening to This Tornado Loves You from Neko Case’s latest album, “Middle Cyclone,” we noted how much richer and more realistically burnished her voice sounded courtesy of the Nuforce DAC. String instruments like violins also sounded silkier and smoother, with more delicate nuance in the upper notes played on that last “E” string. It really was no contest: Everything we listened to using AirPlay just sounded flat and lifeless when compared to the Air DAC’s warmer and richer yet better extended presentation.

As far as Nuforce’s claim that the Air DAC sounds as good as wired solutions, we’d have to wholeheartedly agree on this one. The Air DAC sounded just as good as the well-regarded DACs built into the Oppo Blu-ray player and Marantz receiver we used, and it sounded appreciably better than the Samsung player, delivering a richer yet clearer sound overall.

We were also able to test Nuforce’s claimed range of 15 – 30 meters for the Air DAC and found that claim to be spot on. We had no trouble keeping a connection with our laptop and iPhone while streaming music from about 25 yards away through various walls and within the signal path of other 2.4 GHz wireless devices, such as cordless phones and Wi-Fi capable routers.

Nuforce also states the Air DAC system should be free of drop outs, and in normal use it was. But once we placed the Air DAC receiver within a couple of inches of our Wi-Fi router, we did manage to cause periodic drop outs from both the iTX and uTX. The signal came back quickly every time though, and moving the receiver at least a foot away from the router again eliminated the problem.

If we had to nitpick, we should mention that the Air DAC won’t automatically switch between two connected transmitters unless you first disconnect the one you’re not using. In everyday use this wasn’t anything we really had to consider, and we appreciated the Nuforce’s ability to keep its signal on Fort Knox-style lock down. A simple press of the command button on the receiver switches transmitters when both the iTX and uTX connected, allowing it to hunt for an active streaming signal.

Given all that‘s gone into it, we can enthusiastically recommend the Nuforce Air DAC system. It’s a reasonably-priced solution for those looking to stream high-quality music to their A/V system without being tethered by wires. We liked that it sounded much better than Apple’s AirPlay option and that it even compared favorably to a typical wired connection. Its ease of use makes it such a no-brainer that even your grandma could set it up with a quickness and instantly be groovin’ to the sound. We can’t think of any higher praise than that. Bravo, Nuforce, for making it easier for the masses to enjoy good tunes from their computers and Apple stuffs.