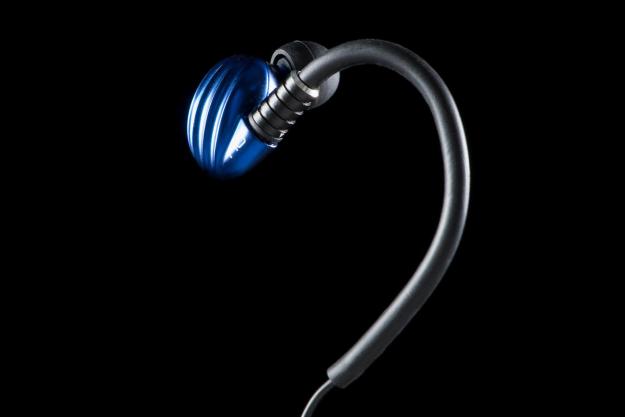 Most folks tend to think of in-ear headphones as a less expensive, more convenient alternative to on-ear and over-ear headphones. Despite being perceived as somehow inherently inferior to larger headphones, the truth is that, if done right, an in-ear design can offer some unique sonic benefits: better passive noise isolation, less noise bleed, and sweet dynamics, for instance.

The experience was downright dazzling, and one we won’t soon forget.

Over the years, in-ear listening devices have been advanced through development by industries outside of the consumer audio segment, like hearing aid manufacturers and professional audio companies; and they have gotten really, really good. I know musicians who use professional, custom-molded in-ear monitors that cost upwards of $1,200 and swear they’re worth every penny.

NuForce’s new Primo 8 don’t cost quite that much, but at $500 they still stretch the limits of what most folks would expect to pay for an in-ear headphone. Like the Westone W40 we recently reviewed, the Primo 8 pack a whole lot of tech into a reasonably compact package. But do they sound like a $500 headphone? Actually, we’d argue that, in many ways, they sound even more expensive.

For $500, you should expect to feel like a kid at Christmas when you break into the Primo 8’s box. We’re pleased to report that NuForce delivers that kind of excitement. The premium box, tiered layout, wide array of accessories, and gem-like display of the earphones give the Primo 8’s packaging the premium vibe you crave from a luxury product.

You’ll find everything you need inside, too, including  two pair each of small, medium, large and extra-large silicone eartips, two pair of Comply foam eartips (the smaller of which is pre-installed on the earphones)  a gold-plated ¼-inch adapter, airline adapter, cable clip, silky microfiber cleaning cloth and a cleaning utensil. The only thing we might add is an extension cable, like the one provided by Westone with the W40.

That’s all plenty to be excited about, yet we couldn’t help feeling a mounting sense of concern as we dug in deeper. The Primo 8’s have an odd shape that make you wonder how in the world they could ever feel comfortable, and they sport an over-ear cable design that we’re usually not fans of. Plus, the stiffness of the cable guide that stems from the earpieces made it seem like it would be impossible to get the right fit and feel.

Expect to feel like a kid at Christmas when you break into the Primo 8’s box.

Then there were the Comply foam tips, which this reviewer can’t stand to use. Sure, they’re great for an air-tight seal, and they are exceptionally good at sealing out ambient noise, but what they do to the sound of an in-ear is abysmal. That is, unless the earphones were voiced to sound their best with the Comply foam tips, in which case they aren’t likely to sound good with any silicone tip.

Even the silicon tips had us worrying, as the “medium-sized” tips look more like most other manufacturers’ small eartip. Is there any way these things could ever fit, let alone feel comfortable?

Fortunately, as we’ll detail shortly, all of our concerns were laid to rest – one right after the other – as we got to work setting up the Primo 8.

The Primo 8’s most notable feature is hidden inside where you can’t see: an array of four balanced armature drivers in each earpiece. For those not familiar, a balanced armature is less like a tiny version of the drivers you see in your home speakers, and more like a little tube or bar that vibrates back and forth. They produce brilliant, detailed treble, wide-open midrange, and excellent dynamics, but seldom a satisfying level of bass. To get around this problem, some manufacturers like to go with a sort of hybrid design which blends a dynamic driver with an armature or two to get the best of both worlds. NuForce, however, took a decidedly different approach.

The Primo 8 use four balanced armatures in a three-way crossover design. Two armatures handle the bass, with one each for the midrange and treble. NuForce says this gives the Primo 8 the ability to produce sound from 20Hz to 20 kHz across a dynamic range of 57 – 129 dB. If you’re not up on your Hz’s and db’s, what those numbers amount to are some pretty sweet bragging rights – if they’re accurate. They are also pretty sensitive headphones, too, which means  you don’t have  to have a fancy headphone amp or personal player to drive them – they should work just fine on your smartphone or tablet.

Every in-ear headphone requires an exacting fit in order to sound its best. This is why we say some in-ear headphones just aren’t for everyone (or, sometimes, anyone). We generally have good luck with the medium-sized silicon eartips that come with most in-ears, but the Primo 8’s “medium” seemed particularly small, and the “smalls” are the smallest we can recall seeing. Perhaps that’s not a bad thing though, as we’ve known some folks who can never find one small enough.

All of our concerns were laid to rest as we got to work setting up the Primo 8.

Before we could make sure the tip we’d picked was the right one, we had to bend the stiff-but-flexible cable guides that are designed to go over and behind the ear. They were easier to form than we’d expected, but getting the right shape was a little more challenging. Still, once we had them dialed in, we found them nearly undetectable.

With the right shape attained, we nestled the earpieces into our ears – a process that took a few tries, and a little getting used to. It helps that the earpieces are clearly labelled left and right, as the Primo 8’s angles and curves can be disorienting at first. With a little practice, we mastered the insertion process and, after a few weeks, it became second nature.

Once we got used to using them, we found the Primo 8’s offer the most secure fit we’ve experienced with an in-ear yet. You can absolutely jog or work out with the Primo 8’s in and never have to worry about them jostling loose.

As for comfort, we’re going to reserve our praise a little. We had no problem wearing the Primo 8’s for hours, but then again, we’ve got a lot of practice. Others may not find them so comfortable, and much of that is going to do with ear shape. The Primo 8 have an interesting shape that’s just not going to jibe with everyone. However, as we’re about to reveal, you owe it to yourself to try them out, even if you have pre-conceived notions about whether they’ll fit or not – they are just too good to risk passing up.

Much of our testing involved playing back high-quality tracks directly from our iPhone 4S, but we also used our Asus Ultrabook in conjunction with Cambridge Audio DacMagic XS and Sony PHA-2 DAC/Headphone amps.

We gave the pre-installed Comply foam tips the benefit of our well-established doubt, and we’re glad we did, because the experience only reinforced the impression we get every time. Hearing the Primo 8 this way, we were disappointed. We were hoping the gobs of clarity and fine detail we experienced with the Westone W40, but we got precious little. The Primo 8 didn’t sound bad this way (even compromised they sound very good), but they weren’t much better than some of our favorite $200 in-ear headphones. Surely there had to be more.

Once we got used to using them, we found the Primo 8’s offer the most secure fit we’ve experienced with an in-ear yet.

Switching to the silicon eartip was, for us, like pulling several cottonballs out of our ears. Suddenly we heard the detail and the clarity, and bass had less coloration. Most prominently, though, there was a restoration of the “air” around instruments. There was more space and definition between instruments, and more realism as well.

For instance, when we listened to “Have you heard” from Bob Curnow’s Music of Pat Metheny & Lyle Mays, we were able to hear all the subtle effects the recording engineer had placed around the brass, which served to help expose some of the zingy overtones in the trumpets and trombones. There was more bite in all the instrumentalists’ attack, and more harmonic integrity to the recording overall. It was like being in the studio mixing room instead of listening on an FM radio station.

The Primo 8’s incredible resolution of inner detail benefited every style of music we listened to. We’ve heard Fitz and The Tantrums’ “6AM” from More Than Just A Dream countless times, but the Primo 8 utterly transformed the song. Bass was more than just ample, it had this weight that you can feel, accompanied by firm, but warm tonality that supported the song all the way through. Vocals were completely uncolored, which came as a shock. We kept searching for some misstep, but we couldn’t find one. Then the organ came in, processed heavily in post-production, with a sound that was equal parts organic wood and new-age synthesizer. Chords swirled in our head, horns peeked in from deep within the mix, and a lone xylophone part, which could have easily been handled by a keyboard, shone its true colors as an honest-to-goodness instrument. The experience was downright dazzling, and one we won’t soon forget.

All told, we spent a little over 70 hours listening to the Primo 8 for this review, making our way through every period, genre and style of music we could get our ears on. The Primo 8 executed it all extremely well. Highlights included well-balanced bass, faithful rendering of instrumental timbres, tons of instrumental and vocal separation, and attacks that were remarkably clean and clear. Midrange is just a touch forward, but only such that it serves to put vocals and certain instrumentation front and center in the mix.

We do have two complaints to mention: The Primo 8’s style might not suit everyone one, and we’re a little concerned with the cable construction.  The Primo 8’s earpieces are fashioned from some fairly pedestrian blue plastic with wide grooves cut into them that may come off as retro or futuristic, depending on your point of view. Also, the shielding on the right earphone’s cable broke away, exposing a little bit of the copper winding underneath, so we’re a little concerned about durability.

Compared to the Westone W40, the Primo 8 were an easier fitting in-ear for us, and we think they’ll be far more secure for anyone – way better for active lifestyles. In terms of long-term listening comfort, we’ll grant the W40 have a bit of an edge (if you can get them to fit correctly  they just don’t suit this reviewer’s ears).

Overall, the Primo 8 nail exactly what we’ve been looking for in a high-end in-ear headphone. NuForce’s deft use of balanced armatures has resulted in an in-ear that exhibits astonishing realism, vivid detail, and engaging energy. Give them a shot, and we think you’ll find they will effortlessly breathe new life into music you’ve heard countless times over. We’re pretty smitten with our Shure SRH1540 over-ear headphones, but when we do take them off, it’s usually to put the NuForce Primo 8 in. Count the Primo 8 as our ears’ new best friend.