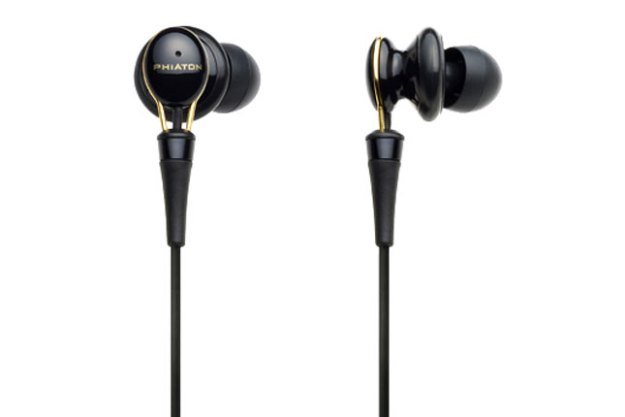 “Phiaton’s PS 20 NC noise canceling headphones use an innovative “half-in-ear” design to block out the madness around you without sacrificing comfort or sound quality.”

Earlier this year we had an opportunity to review Phiaton’s PS 210 headphones. Their unique “half in-ear” design proved to be an admirable design point that improved how securely they fit as well as their sound quality. Now, we take a moment to review the new PS 20 NC headphones, a set of noise-cancelling earphones that combine the same “half in-ear” design with active noise cancelling that proposes to reduce ambient noise by 95%.

The PS 20 NC headphones come packaged with 4 different sizes of silicon eartips, an airline adapter, a small carrying pouch and a single AAA battery to power the active noise cancelling technology. The set that Phiaton sent us is primarily black with gold accents but the PS 20 NC are also available in “iPod white”.

If you hadn’t seen Phiaton’s “half in-ear” design before it would be easy to take a look at them and wonder at how they’d ever fit comfortably. Perhaps this is because most of us think of the ear canal as moving inward rather than forward; so the unfamiliar, angular appearance of the ear-phones would seem to be at odds with our anatomy. Once placed in your ear, however, one can see the advantages of contouring the angle of an earphone to match our ear’s natural shape. The drivers of the earphone are directed down the canal rather than directly at a piece of cartilage and the larger, circular portion of the earphone helps to seal the ear and provide better bass response. Unlike the PS 210, our PS 20 NC did seem to create a solid seal and immediately provide some noise reduction. This may be due to the addition of a soft, silicone band around the circular portion of the earphone.

Roughly half way down the 3 ft. cord we find the noise cancelling section, which is barely larger than the AAA sized battery that it holds. Phiaton calls their noise cancelling technology “noise blocker” and claims that it will reduce up to 95% of outside noise. Like most in-ear and smaller on-ear headphones, the noise cancellation circuitry must be placed in-line with the cord rather than in the earphone itself. Unlike many other earphones, though, the PS 20 NC noise cancelling module is very small and lightweight. On the NC module we find a belt clip, an on/off switch, a “mute” button that temporarily mutes music and disengages noise cancellation (presumably to allow conversations with your flight attendant or travelling partner) and a red LED to indicate when the noise cancellation is engaged.

One of the most commonly overlooked features of noise cancelling headphones is their ability to operate without battery power. With many noise cancelling ‘phones, when the battery dies so does the music. Phiaton has addressed this issue with what they call “Everplay” a feature that allows the listener to continue hearing music without battery power.

We had just a few quibbles with the design of the PS 20 NC headphones. The on/off switch for the noise cancelling circuitry is difficult to toggle back and forth and requires a bit more force than we’d like. The cord connections on either side of the noise cancelling module don’t seem as rugged as they could be so we are a little concerned about strain-relief in the long term. Finally, the cord itself conducts plenty of noise as it scrapes across clothing or hits other objects but with noise cancelling in place, this issue was negligible.

Like the PS 210, we found the PS 20 NC to be very comfortable. The in-ear portion of the headphones doesn’t reach too far down the ear canal and the “half in-ear” section sealed nicely within the ear. We did notice during listening sessions lasting over 2 hours that there was some pressure being exerted by the larger, circular portion of the earphone. This may be an issue for those with smaller ears but we think most will find the PS 20 NC plenty comfortable for long terms use. We also felt that the PS 20 NC fit more securely than most in-ear headphones and are an excellent choice for those who listen while exercising or working around the house.

We tested the effectiveness of the noise cancelling circuitry by using the PS 20 NC both with and without music while riding a bus and a train, sitting near a noisy box fan and operating a lawn mower. We found that the PS 20 NC did best at cancelling out higher frequency noises like the rushing air sound most commonly encountered on an airplane or fast moving vehicle. When we engaged the PS 20 NC’s noise cancelling while sitting next to a 3-speed box fan on high, without music, the noise was almost entirely cancelled out. With music engaged, the fan noise was totally inaudible. The noise was less significantly reduced in the company of our much louder lawn mower but with music engaged and turned up to a respectably loud volume the PS 20 NC did a great job of bringing our music selections across loud, clear and with surprising detail. At the end of our noise cancellation tests, we came away feeling that the PS 20 NC did a very respectable job of removing noise, even when compared to more expensive, over-the-ear designs we’ve tested previously.

Next, we tested the PS 20 NC’s sound quality in a quiet environment to gauge their sound in the best possible listening scenario. We used our standard variety of sources including an iPod Touch, iPhone 3G, Dell Laptop, Onkyo A/V receiver and with HeadRoom’s Micro DAC and Micro Amp. Given that the PS 20 NC have a similar look and to their cousins, we expected the performance to be on par with what we had previously experienced with the PS 210. We were pleased to discover that the PS 20 NC sound just a bit better.

With the first note of our test track, the PS 20 NC’s prodigious bass prowess was evident. On Karl Denson’s “I Want the Funk” track from Dance Lesson No.2 , we were treated to well separated kick drum and Hammond B-3 bass that was both tuneful and authoritative. The PS 20 NC did an admirable job of exposing both instruments individually without a hint of muddiness. On the more contemporary sounding “Rock Steady” from Marc Broussard’s Carencro album, the PS 20 NC showed once again that they could play even the lowest octaves of a five-string electric bass and still provide massive kick drum punch, again without any hesitation or blur.

We were equally impressed with the PS 20 NC’s capability of reproducing midrange frequencies accurately and with little to no congestion. All of the vocal performances we used came across naturally. There was no over-emphasis on any particular section of the midrange frequencies which is impressive for any ear-phone with respectable bass response, let alone a set in this price range.

Perhaps the most pleasing surprise we encountered was with the PS 20 NC’s high frequency response. Our overall experience with the PS 210 was good but we felt that the extremely high frequencies suffered from a thin, slightly artificial sound. We didn’t experience that effect with the PS 20 NC. Even the most sibilant test tracks seem to hold together well at high volumes and the intimate details of high hats and string instruments came through well enough that we felt we were listening to a much more expensive set of in-ears.

We must make special mention of the fact that the Phiaton PS 20 NC sounded almost as good with no noise cancellation engaged (in a quiet environment) as they did with it turned on. While many of the noise cancelling headphones we’ve tested were also capable of producing sound with no power, the PS 20 NC are the first we’ve tested where the un-powered sound didn’t suffer considerably. In fact, if the PS 20 NC didn’t have the capability to cancel noise, they would still be worth their asking price as a quality, passive in-ear headphone.

Phiaton hits a real sweet spot of performance and price with the PS 20 NC noise cancelling in-ear headphones. Not only are they effective noise cancellers, they sound as good as some of their more expensive audiophile competitors and fit comfortably for long periods of listening. Highly recommended.