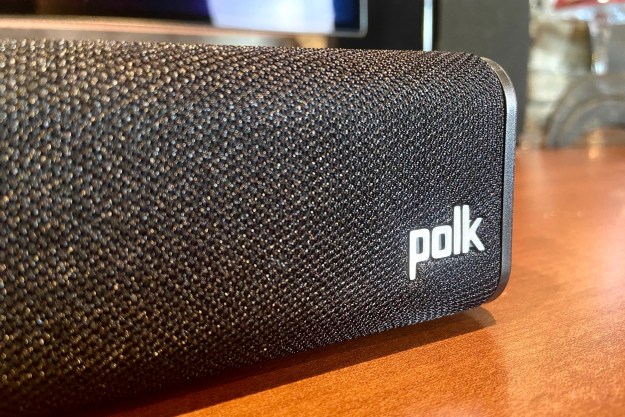 “It terms of sheer audio bang for your buck, it doesn't get much better than the Polk Signa S4 soundbar.”

Polk’s latest soundbar, the $399 Signa S4, features dedicated up-firing drivers to help it deliver an immersive Dolby Atmos experience — it’s one of the only soundbars at this price to do so. But Polk’s big achievements with the Signa S4 are its simplicity of setup and its ability to reproduce crystal clear voice and dialogue — something that often gets overlooked. We just wish that Polk had included a few more adjustments for other aspects of the S4’s sound.

Here’s the full rundown on this affordable home theater upgrade.

Polk has gone for a minimalist design, which I think is the best approach when it comes to soundbars. Wrapped almost entirely in black acoustic fabric, the Signa S4 draws very little attention to itself. It only stands 2.4 inches tall, and at just over 41 inches long and 3.7 inches deep, it will easily find a home in front of any TV with a 42-inch screen size or larger.

You’ll be able to place the subwoofer almost anywhere, except under a sofa.

It’s also quite lightweight, so you should have no problem mounting it to a wall using the provided spacers. Top-mounted buttons give you easy access to the most commonly used controls, and Polk includes a compact, dedicated remote for everything else. It isn’t backlit, but the button sizes and placements make it easy to use even in a darkened room.

The included wireless subwoofer is incredibly compact, as you can see in these photos. Its six-inch down-firing driver is enclosed in a simple black box that stands under a foot in height and is only 8 inches wide, so you’ll be able to place it almost anywhere, except under a sofa.

Around the back of the soundbar, you’ll find a very spartan set of ports: One HDMI ARC/eARC input, one optical input, and one 3.5mm analog input. There’s also a USB A port, but don’t get too excited about that — it’s strictly for firmware updates, not for music playback from a storage device (boo!). If it’s music you want, your options are somewhat limited. If you have access to a streaming service on your TV or your streaming media device, you’re good to go via HDMI or optical. But if you want to use your phone, you’ll be relying on the speaker’s Bluetooth connection — there are no Wi-Fi technologies like Apple AirPlay 2 or Chromecast Built-in.

Setting up the Signa S4 couldn’t be simpler.

Polk will tell you that you need an HDMI eARC connection to get Dolby Atmos sound, but that’s not perfectly accurate. Even if your TV only has HDMI ARC, you can still get Dolby Atmos as long as your TV can output Dolby Atmos as Dolby Digital Plus. Not every TV can do this, however, so be sure to check your television’s specs to avoid disappointment.

Confused? Here’s an in-depth guide on how to know if you’re actually getting Dolby Atmos sound.

Unfortunately, Polk has tied the optical and HDMI ports together as a single source, meaning that once you pick one of them for your TV connection, you can’t use the other one for another device like a CD player or a dedicated audio output from a Blu-ray player. The 3.5mm analog input is the only physical auxiliary audio connection.

If you’ve never connected a soundbar or A/V receiver before, you may need to tell your TV to use its HDMI or optical output for sound, but most TVs recognize when an external speaker is connected and take care of making this switch automatically. There’s no mobile app to use, no on-screen menus to follow, and somewhat surprisingly for a $399 Dolby Atmos soundbar, there’s no room calibration process to walk through. Like I said, it really couldn’t be simpler.

Keep in mind that if you think you might want to upgrade to a system with a more powerful sub, or dedicated rear-channel speakers, the Signa S4 can’t help you with that. If you want that kind of flexibility, look to brands like Sony, Bose, Sonos, LG, or Samsung.

Without an on-screen display for your TV, or a text display on the front of the speaker, Polk leaves you to interpret a series of LEDs nestled behind the grille. My review unit arrived without a full user guide, but it wasn’t that hard to figure it out.

I auditioned the S4 with all of my go-to Dolby Atmos movies; they all sounded stellar.

Changes in volume are reflected by an increasing number of white LED dots, while changes to voice mode are denoted with a quick pulse of an orange LED. Dolby Atmos is indicated with a light blue dot, and green is for standard digital audio. A darker blue LED tells you when you’re using Bluetooth.

Despite my reservations about the Signa S4’s connections, this soundbar sounds great. Thanks to the included subwoofer and the dedicated up-firing drivers, it creates a genuinely wide and deep soundstage that includes some very convincing surround effects when watching movies with Dolby Atmos soundtracks.

You can’t adjust the level of the height drivers — an unfortunate omission — but Polk has clearly done its homework; I found the overhead effects are nearly as good as you’ll get on Sony’s considerably more expensive HT-A5000.

If you’ve ever struggled to make out what an actor was saying, the S4 will make that task a lot easier.

That tiny sub isn’t powerful enough to shake your furniture or rattle your windows, but you will hear and feel it — it provides a very nicely balanced low-end kick. That’s really all you need to take your TV watching experience into true home theater territory, and it helps set the S4 apart from the Sonos Beam Gen 2 and JBL Bar 5.0, both of which are Dolby Atmos compatible, but don’t come with subwoofers and are priced within $50 of the Polk.

I auditioned the S4 with all of my go-to Atmos movies: Mad Max:Fury Road, Marvel Avengers:Infinity War, Ford v. Ferrari, and (most recently) Dune. They all sounded stellar.

And it’s not just Dolby Atmos content that benefits from the S4’s 3.1.2-channel sound system. The on-board digital signal processing does a great job of upscaling two-channel and 5.1 into a virtual 3D presentation. In fact, when I first got it connected, I began playing what I thought was Atmos content from an Apple TV 4K, without noticing that the small, color-coded LED on the front of the soundbar was green for pulse-code modulation (PCM), and not the light blue that indicates a true Atmos signal. It absolutely could have passed for true Atmos from a lesser soundbar.

Even more impressive is the clarity of dialogue. Polk provides three levels of speech enhancement (which it calls Voice Adjust), and if you’ve ever struggled to make out what an actor was saying (unfamiliar accents notwithstanding), these settings are guaranteed to make that task a lot easier. There’s a small price to be paid on the second and third level of enhancement — the high frequencies start to introduce a bit of distortion — but it’s not a deal breaker.

Music, when piped through the HDMI or optical port from the TV, is a treat. Much like with movie content, the Signa S4 does an excellent job of resolving Dolby Atmos Music content, and takes advantage of the soundbar’s full complement of drivers to create an immersive, larger-than-stereo feel, even for regular two-channel stereo. Switching between music and movie modes mostly impacts that sense of depth, with movie mode predictably widening the sound, while music mode keeps things tighter, with a more forward direction. But beware, audio purists: There doesn’t appear to be a way to force the S4 to deliver a pure two-channel-only sound.

And, just as predictably, Bluetooth streaming robs tracks of much of their detail and range. If you fire up Amazon Music on an iPhone via Bluetooth, then find the same track on the Amazon Music app for the Shield TV, and swap back and forth — which is exactly what I did — you will swear the Bluetooth version sounds like it’s coming from a different (and worse) speaker.

This is truly upsetting, because it means the only way to hear the Signa S4’s full music potential is to keep your TV on and use a compatible streaming service. This is where Wi-Fi support with either AirPlay 2 or Chromecast built-in would have helped a ton. Don’t get me wrong, Bluetooth streaming isn’t awful — but it’s not very good either.

I noted in the introduction that I miss the lack of deeper settings, like EQ, channel levels, virtual surround effects, loudness, etc. To be fair to Polk, a lot of soundbars at this price, like JBL’s Bar 5.0, also lack these adjustments. But that just means this was an opportunity for Polk to differentiate itself.

Polk includes the Signa S4 soundbar, a wireless subwoofer, two power cables, an HDMI cable, an optical cable, a remote control, two AAA batteries, a set of wall-mount spacers, a wall-mount template, and a quick-start guide. Polk’s packaging uses a fair amount of styrofoam, which might prove tricky to recycle, depending on where you live.

What the Polk Signa S4 lacks in features, it makes up for with brilliant, immersive sound in a very compact and simple package. For folks who want to turn their TVs into movie theaters with the least amount of fuss and headache, it’s $400 very well spent.

From a pure home theater point of view, you’ll be hard-pressed to find a better, bigger audio bang for your buck than the Polk Signa S4. But that doesn’t mean there aren’t better options if you expect your soundbar to do more than act as a TV speaker upgrade.

The Sonos Beam Gen 2 might not come with a subwoofer, but it works with Dolby Atmos and sounds great — especially in small-to-medium-sized rooms. And thanks to the Sonos ecosystem, it’s even better for music and as part of a whole-home sound solution. It’s fully expandable via other Sonos speakers to a 5.1.2 system, works with AirPlay 2, and you even get a choice of Alexa or Google Assistant for hands-free control over your music and your smart home. It’s a good choice if you have already started a Sonos system or plan to do so.

On the other side of the equation, the Yamaha YAS-209 might not offer Dolby Atmos, but it comes with a subwoofer, it has two HDMI ports, it includes Amazon Alexa, and it works with both AirPlay 2 and Chromecast built-in over Wi-Fi. It’s a great hybrid of music and movie capabilities.

As a simple soundbar plus wireless subwoofer, it’s hard to see why the Signa S4 wouldn’t last as long as you desire. But powered, amplified products can and do fail from time to time, so your mileage may vary. Polk backs the amplifiers with a one-year warranty, while the speakers themselves come with a three-year warranty.

Yes. It may not be a sonic Swiss army knife, but it will turn your TV room into a super-fun and immersive home theater within just a few minutes of getting it out of the box.