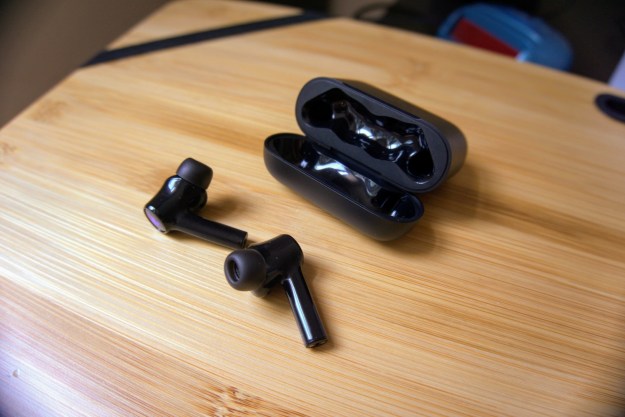 “The new Hammerhead True Wireless brings an RGB light show to your ears along with fairly effective ANC.”

It used to be that Razer was a bigger name in the gaming world than the audio world, but after releasing multiple generations of audio products, it’s safe to say that’s no longer the case. The Razer Hammerhead True Wireless earbuds are the latest in Razer’s audio lineup, and the second generation of Razer’s true wireless earbuds focused on gamers.

The immediate and obvious comparison for the Razer Hammerhead True Wireless is to the AirPods Pro. Coming in glossy black, they have angled earbuds attached to a stem, in-ear silicone eartips, and a pillbox-sized charging case that charges with USB-C. Out of the box, you get three different sizes of silicone eartips, but the default pair worked perfectly for my ears.

The fit is snug without feeling uncomfortable for long periods of wear. At just 53g, the earbuds are barely noticeable when wearing them. This wasn’t the case with the previous generation, which were half-ear and didn’t go directly into the ear canal. The in-ear design also improves passive noise isolation, which works well to boost active noise cancellation.

A light show in your ears

This is all fairly standard stuff you’ll find on other true wireless earbuds, though, including Razer’s own Hammerhead True Wireless Pro. The big feature here is Razer Chroma RGB, Razer’s full-color lighting ecosystem that it uses across all its gaming devices and peripherals. After all, how do you know something is for gamers without RGB?

On the back of both earbuds, you’ll see Razer’s logo illuminated with RGB lighting. The lights are active by default in Breathing mode, but you can adjust brightness and modes with the Razer Chroma app. One of the more interesting modes is Audio Meter, which reacts to the music being played to give people around you a light show. It’s an eye-catching feature that certainly drew some stares in the elevator and the grocery store.

Aside from the aesthetic effect, I can also see it being useful for night joggers. Razer says it’s worked to optimize Chroma, so it doesn’t excessively drain your battery life, and that it’ll last longer than the first-gen Hammerheads.

The Razer Audio and Razer Chrome companion apps are both required in order to separately control audio features and the RGB lighting of the Hammerhead True Wireless. I installed both apps on the Samsung Galaxy S20 Ultra. Upon initial use, the app was slow to connect with the earbuds each time, but after several software updates, this became much faster and more responsive. Overall, the Razer Audio app offers the key customizations most people look for in true wireless earbuds.

ANC can be turned on to blot out most background noise, set to Ambient mode so you can hear some amount of background noise (which is helpful while commuting or having to talk to someone), or turned off entirely if you want to save battery.

The Hammerhead True’s controls are all touch-sensitive and can be remapped to different tap gestures for play/pause, skipping tracks, voice assistants, controlling ANC modes, and more. The touch controls were a bit finicky, and I never got quite used to adjusting the volume, which requires you to double-tap and hold. It almost never worked right on the first try, and often paused my music or skipped my track instead. Maybe it’s something that requires practice, but I would have preferred to remap double-tapping to do something else, even if it meant losing the volume function.

The Hammerhead True Wireless have Bluetooth 5.2 connectivity, 10mm drivers, and a frequency response of 20Hz to 20KHz. In practice, this translates to solid sound quality with balanced lows, mids, and highs. The Default audio profile is crisp and well-balanced, and EQ can be customized to your preferences if you like punchier bass or crisper vocals. I particularly enjoyed Enhanced Bass for listening to Sabaton and Iron Maiden, while Mike Duncan’s Revolutions podcast benefitted from Enhanced Clarity. Watching Netflix shows sounded perfect on default settings.

The Default audio profile is crisp and well-balanced

As a gamer, I took advantage of Gaming Mode, which reduces audio latency to 60ms, albeit at the cost of ratcheting up audio compression and shortening regular Bluetooth range from 33 feet to about 2 feet. That’s not really a big deal unless you’re using the Hammerhead True Wireless with your console or gaming PC and sitting some distance away from the source device. I only used it with my phone and laptop, so I didn’t encounter any range issues.

I used Gaming Mode to play Genshin Impact, Assassin’s Creed Rebels, and Asphalt 9 Nitro on my phone. Asphalt 9 was where I heard the biggest impact of the reduced audio latency — there was no noticeable delay between seeing my car burn rubber and hearing the tires screech.

Overall, I found the sound profile compared favorably in terms of detail and soundstage to the Anker Soundcore Liberty 2 Pro I typically use, though it won’t hold up against more premium true wireless earbud options or over-ear Bluetooth headphones.

The other big standout feature here is feedforward ANC, which means that the earbuds have dual microphones that take in noise and cancel them out with counter noise. Feedforward isn’t as good as the hybrid ANC that’s on the True Wireless Pro, which has microphones on both the inside and outside, but combined with the passive noise cancellation, it gets pretty close. It was definitely better than the ANC on the Samsung Galaxy Buds Live, which don’t form a physical seal with your ears.

I kept ANC enabled almost all the time and found it very effective at blotting out most background noise, including the rumbling of my window air conditioner, the sound of my fan, and the general bustle and cry of the subway. I also didn’t have any problem hearing audio over the sound of my rowing machine when I was working out. That said, it won’t match the ANC capabilities of the Sony WF-1000XM4 or AirPods Pro, which can blot out a wider range of sounds more consistently, and you may notice a slight background hiss when no audio is playing.

The Razer Hammerhead True Wireless are a compelling pair of true wireless earbuds despite some software quirks and finicky controls — audio quality is solid, RGB lighting adds a fun and stylish look, and ANC is good enough to use during a commute or while working out.

If price is no object, the $249 Apple AirPods Pro offer more seamless connectivity for iOS users with Apple’s H1 chip and superior noise canceling. Sony is also a market leader in noise-canceling, and the $280 WF-1000XM4 are packed with features and support codecs like LDAC. The recently announced Samsung Galaxy Buds 2 offer comparable ANC, IPX7 water resistance, and even better battery life for $150 if you’re willing to wait for them to arrive in stores August 27.

Anker’s Soundcore brand has plenty of reasonably priced true wireless earbuds for those on a budget, including the $70 Liberty Neo, $80 Life P3, $130 Liberty Air 2 Pro, and many more, though those won’t give you the same level of audio quality or noise cancellation.

The Razer Hammerhead True Wireless supports IPX4 water resistance, which should protect them against splashes and sweat so you can use them for workouts. I also accidentally dropped them a few times, and they survived without any physical damage. They also come with Bluetooth 5.2, which was only just introduced in January 2020, so that should keep you future-proofed for a few years. The earbuds also come with a two-year limited warranty.