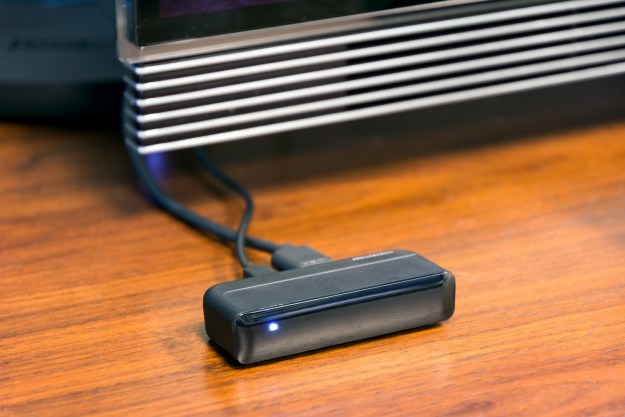 “Dollar for dollar, there’s no better streamer than the Roku Express.”

Roku revamped its lineup of streaming devices in early October 2017, announcing updates to the Express, Streaming Stick, and Ultra, and introducing the new Streaming Stick+. It was a predictable move, given recent updates rolled out by Amazon (the Fire TV) and Apple (the Apple TV 4K) which greatly improved upon those devices’ capabilities — thus raising the bar in streaming land.

If you come at the king, though, you best not miss. Earlier this year, we awarded the Roku Express four stars out of five, recommending it as a killer entry-level streaming option. Does the updated model maintain its spot in the current landscape? The short answer is yes. Packing Roku’s excellent ecosystem, and claimed improvements like five times the computing power of its predecessor, the Roku Express is still a killer deal. As we explain in further detail for this , so long as you don’t covet 4K and capabilities, you’ll be hard-pressed to find better value for $30.

Roku didn’t make any changes to the packaging for the Roku Express or included accessories. Upon removing the Express from its box, you might be surprised by its size; the whole device is about as long as an index finger and twice as thick. In fact, the remote is bigger than the streaming device itself. The Express is sheathed handsomely in matte black.

The remote control here is mostly identical to the remote you’ll find in any Roku box, with dedicated buttons for Netflix, Amazon Video, Sling TV, and Hulu (the dedicated buttons often change throughout the year) — though there’s no dedicated headphone jack or TV control buttons. The remote’s layout, with “Home” and “Back” buttons up top, is par for the course.

The streaming device can draw power from an included adapter or from a television’s USB port. Smartly, there’s also an adhesive strip so you can stick it to your TV or entertainment center. (Some might gripe about aesthetics here, but if you’re so worried about that, buy a better streaming device.) This is particularly useful, given that the default HDMI cable is just two feet long. If you want the Express+, which includes a 3.5mm-to-RCA connector for use with older televisions, it’ll cost an extra $10.

On the surface, the Express can do everything that other streaming devices do. Dig in a little bit, however, and you’ll see that it’s just $30 for a reason.

The 802.11 b/g/n Wi-Fi adapter for the Express can only connect to networks up to 2.4GHz, and without an Ethernet port, it’s a step slower than its more expensive siblings. If your TV is adjacent to your router, you should be fine, but depending on your wireless router’s strength, you could be in for some extended load times and buffering.

The Roku Express works great — it’s reliable and packs a ton of features.

The Express doesn’t support or HDR playback – you’re limited to 1080p at best. There’s no SD card slot, either, and though the processor might be “five times more powerful” than the previous iteration, that’s still orders of magnitude less effective than whatever’s powering Roku’s more pricey options.

As is tradition, much of the value of the Express lies in the fantastic Roku ecosystem. With close to 4,000 apps — though Roku prefers to call them “Channels” — there’s no real competition. The awesome cross-channel search is here, too, so typing in “Rick and Morty” will return results (by season) for any app that you have downloaded, along with relevant pricing (including free). It’s a feature that you can’t truly appreciate until you’ve used it.

Roku’s user interface is just plain simple and effective. Apps — or, channels — are arranged as big squares that can be organized in any order you see fit. If you watch Netflix the most, keep it up top. If you want your news channels separated from movies and TV, simply move the apps into groups within your lineup. This is the closest one can get to having apps look more like channels in a TV guide.

Although the remote doesn’t have a microphone, you can sync up to Roku’s mobile app to use voice-controlled search, as well as to stream analog audio via connected headphones. You can download or delete channels directly from your phone as well, and it acts as a surrogate remote should the need arise.

As we mentioned above, the Express isn’t packing much power under the hood – at least, not in comparison to the other Roku streamers. The new version of the Express has just a bit of input lag — most noticeable when using the analog search keyboard — though it’s noticeably more snappy than the one we originally reviewed.

Previously, we complained about the Netflix app; navigation was slow going, with button presses frustratingly stacking up and then registering all at once, often sending us to content we weren’t trying to browse. This time around, it’s a lot better — not perfect, but better. Netflix content loads quickly – less than five seconds, in most cases – and we weren’t inundated with buffering, even when skipping around a lot. Most other channels performed a bit more smoothly, which could be a result of less resource-intensive menus.

The streaming device itself boots up in a matter of seconds, and, after a minute or two of initial updating, loads most channels in less than five seconds. Generally speaking, we found that the smartphone app is a lot more useful than the physical remote, as you can instantly launch any channel – if it’s in your library – and use the keyboard function, which is a lot easier than “typing” with a remote control. The remote is nice to have for those without smartphones, but ultimately it’s pretty superfluous.

Overall, the Roku Express works great. It’s not the fastest streamer, but it’s reliable and packs a ton of great features.

Nothing can beat Roku’s platform.

If you’re short on bucks but still looking for some bang, the Express is the way to go. Compact, clever, and convenient, the streaming device offers access to Roku’s class-leading platform at minimal cost. It’s easy to set up and easy to use, with an awesome search function and a gargantuan selection of channels.

If you want to stream content in and , or if you’re impatient, this isn’t the device for you. In an oversaturated market, the Express doesn’t quite reach “Editor’s Choice” level, but we still recommend it to anyone looking for an affordable streaming device.

Pound for pound, dollar for dollar, there’s no better streaming device than the Roku Express. It may not quite fulfill the potential for quintupled performance, but the Express holds significant value by virtue of the excellent Roku ecosystem.

At the price? No. The Google Chromecast and Amazon Fire TV Stick are great, and they’re actually better, faster devices under the hood, but Roku’s awesome operating system and massive catalog of channels gives the Express a leg up on the competition.

The streaming device itself shouldn’t encounter much wear and tear while affixed to your entertainment center or TV. As and content becomes more common, the value of the Express will diminish slightly, but the Roku universe isn’t going to stop growing anytime soon.

Yes. The Express and Express+ are absolutely worth the money.

Topics
McIntosh’s new $8,000 AVR: gigantic power, with a Dolby Atmos catch
How to watch Super Bowl 2023
Rode’s NTH-100M headphones are built for gamers
Sony’s 2023 AV receivers are Sonos-ready and work with wireless speakers
YouTube TV: plans, pricing, channels, how to cancel, and more
Apple’s MLS Season Pass is about more than just streaming games
Best 75-inch TV deals: Get a large screen for the Super Bowl
Flash sale drops the price of this 55-inch QLED 4K TV to just $370
Netflix expands its spatial audio, number of devices that can download content
The best movies on Disney+ right now (February 2023)
Perfect for the Super Bowl, Samsung’s Frame TV is $1000 off
Save 40% on Peacock Premium when you subscribe today
The best movies on Hulu right now (February 2023)