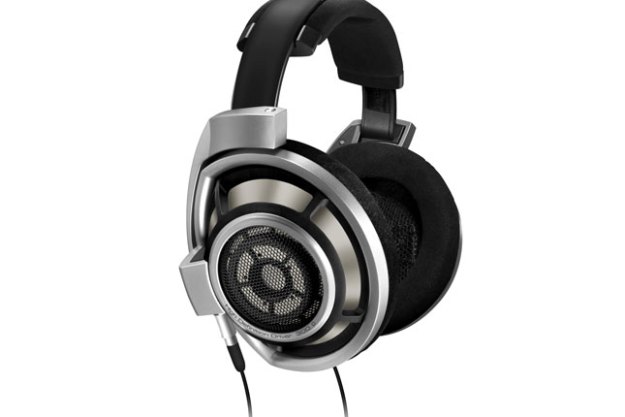 Replete with premium components, proprietary technology and several industry firsts, Sennheiser’s HD800 headphones easily earn their place amongst the very best ever made. Retailing at just under $1400.00 though, the cover charge for this listening party is a little steep. However, if you want a jaw-droppingly amazing personal audio experience, these cans deliver and then some.

Let’s get this out of the way right off the bat: The HD800 headphones are BIG. From the case to the cord, it’s clear that Sennheiser’s prime directive was audio perfection and, apparently, the manufacturer believes that size really does matter. The case for the company’s flagship cans is about the same size as a large shoe box (13.5”x105”x5.5). Opening the hinged case reveals a satin-lined, custom-cut foam bed in which the HD800’s rest snugly. Perched near our listening station, the silver and black HD800’s exuded a trophy-like quality that is sure to make any owner very proud, indeed.

The cord for the HD800 set is 3 meters long and terminates on one end with custom, detachable stereo connections – one for each headphone. We know plenty of folks who have ripped headphones right off of their head by tripping on the cable. Thanks to Sennheiser’s breakaway connectors though, you’re not likely to do any serious damage.

On the other end of the cable is a ¼” male jack. As the larger of the two common connectors, this jack will NOT fit into your laptop, iPod or other portable device. To do that, you’ll need a ¼” to 1/8” adapter that is generally available wherever electronics are sold. The included ¼” connector will fit into most receivers, mixing boards and headphone amplifiers, however. As these headphones are designed with listening enthusiasts in mind, we are not surprised to see them natively terminated with the larger ¼” jack. However, an included adapter might be a nice idea for future consideration, given the popularity of today portable media players.

A quick weight comparison between the HD800s and a reference pair of AKG K141 monitor headphones revealed that the substantially larger Sennheiser set isn’t notably heavier than other headphones of this type and grade. Consider it a reflection of the cutting=edge materials that the HD800’s are constructed from.

The materials used for ear and head cushioning are soft microfiber fabric over foam. During our listening tests, we never experienced any fatigue from extended listening sessions. Unlike more typical leather applications, we found that these headphones stayed cool, dry and effortlessly comfortable even after hours of constant wear. For even more comfort, the HD800 headphones are very limber. The headband offers independent adjustment on the left- and right-hand sides, and two sets of hinge points allow on-the-fly adjustment as your head moves. Overall, the HD800s are very comfortable.

Just beyond the extremely comfortable exterior lay the guts and glory of the HD800s. Here, Sennheiser has mounted the largest transducers ever used in a headphone. The size of the transducer, stainless steel mounting material, open-backed design and premium wiring configuration are designed with as much care as the highest-end audio equipment available today. This allows them to deliver an amazingly open, uncompressed sound with deep bass extension.

Sennheiser wants you to know that the HD800 audiophile headphones were “Crafted for Perfection.” While such claims in the audio industry can usually be chalked up to little more than marketing hype, there is good reason to believe that Sennheiser made every effort to achieve perfection while developing the HD800’s over a period of 8 years. Reading the back-story on Sennheiser’s website, it is clear that the company takes a great deal of pride in this product.

To test the sound of the HD800s, we used an array of components including an iPhone 3G, Onkyo TX-SR705 Surround Receiver, Dell Latitude D810 laptop computer and a HeadRoom Total BitHead headphone amplifier.

Donning the HD800’s for the first time, you may get the feeling that you’re about to direct ground traffic at the airport. (Which is to say that the sensation of having the entire ear encompassed, for some, will initially take a little bit of getting used to.) Nonetheless, after a few minutes of wear, the relatively lightweight headphones seem to disappear on your head. We have to credit the HD800’s creators for managing to make such a large transducer sit comfortably on the head. The slim profile of the headphones seems to make up for their large surface area and keeps the ‘phones from becoming clumsy.

To start our listening session, we connected the BitHead amp in between our laptop and the HD800s. Even an entry level headphone amp like the BitHead will offer better sound than what most computer sound cards are capable of. The quality DAC and clean amplification tighten up bass and make the high frequencies sound silky and less metallic. No doubt any headphone geek will tell you that, to get the best out of your headphones, a quality headphone amp is essential. Anyhow, using this arrangement, we queued up Jamie Cullum’s “Twenty Something” from the album of the same name.

First impressions were all positive and the overall wow factor was significant: The HD800s sounded open, balanced and controlled, refusing to give in to distortion even at dangerously high listening volumes. Jamie’s voice came through with a grit and realism that made us feel as if we were sitting in the control room of his recording studio, listening to the track’s playback straight off the board. Furthermore, each instrument occupied its own place within the soundfield. Acoustic Bass was focused and well supported, never forced. The high frequencies were lustrous and sparkling, but never brash as well. While some of the sibilance from Jamie’s voice seemed a little harsh, we soon learned that this was a reflection of the recording, not a flaw in the HD800s’ reproduction of the track. This trend continued throughout our listening sessions.

We then switched gears and auditioned an uncompressed version of “All Blues” from the Russell Gunn plays Miles recording on HighNote records. Served through the iPhone and BitHead amp combo, Russell’s processed trumpet sounds had a richness we’d not experienced with other headphones and, indeed, most speakers. Again, a sense of realism and intimacy was lent to the listening experience that we’d not experienced in a long time.

We then removed the BitHead from the chain of components, connected a ¼” to 1/8” adapter (not included) to the end of the cable and plugged directly into the iPhone. After playing the same track again to analyze the differences, we noticed that the highs had a bit more of an edge to them and the bass had lost some of its focus. This is to be expected coming straight off a portable device with such a revealing set of headphones. Still, despite these changes, the iPhone playback sounded better than ever.

When first savoring a high-end piece of audio equipment, many listeners new to the club often make comments like: “I’m hearing things in the recording I’ve never heard before.” While listening to the HD800s though, even seasoned audiophiles repeatedly commented on hearing minutiae that had gone previously undetected. We feel that this is the hallmark of a truly great high-end audio product.

Uncompromising design standards have produced a truly outstanding product in Sennheiser’s HD800 headphones. The cans’ flair for accuracy, detail, openness and depth represent a giant leap forward in the world of audiophile gear. As such, we recommend anyone considering a high-end headphone purchase to put these on their short list.

How loud is too loud for your smart devices?

Austin Butler breaks the rules in the new Elvis trailer