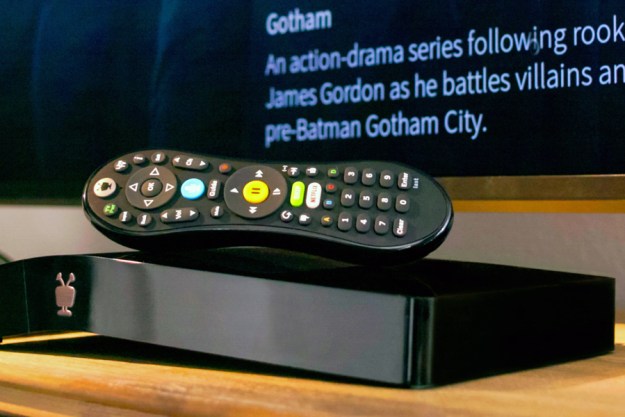 “If you have a 4K TV, but haven’t yet cut the cord, the Bolt OTA is your best choice.”

TiVo is best known for its cable-compatible DVRs, but the company has been quietly supporting cord-cutters through its Roamio OTA (over the air) receivers for some time. It makes a lot of sense — just because you want to rid yourself of a monthly cable bill doesn’t mean you want to plunge yourself into an entirely different way of watching TV. For many, the Roamio OTA ($400) was the perfect answer, offering an easy way to record your favorite shows with a built-in collection of the most popular apps for streaming internet content (OTT), and of course, TiVo’s intuitive interface and custom content curation.

But the Roamio was built for a previous time, when HDTVs maxed out at 1080p and HDR was something you only did with smartphone photos. Since then, the 4K revolution has taken over all but the smallest, and cheapest TVs, and many of the streaming giants have started to support it. This puts TiVo in an awkward spot: is still a pipe-dream for antenna TV, and only starting to trickle into cable and satellite services. Would it really make sense to market a Roamio OTA?

The answer, it seems, is yes. TiVo’s new Bolt OTA is exactly that: The same 4-tuner OTA DVR as the Roamio OTA – one of the best OTA receivers around — packed into a smaller chassis and packing streaming.

First things first, the Bolt OTA offers the same great OTA experience as the Roamio, but with a significantly more responsive interface. Apps launch faster, and channel changes are quicker (they were already impressively fast). Even the initial set-up, a process that took between 30-40 minutes on the Roamio OTA, has been accelerated, taking us just 15 minutes.

The wave-like shape of the new product, which it shares with the Bolt VOX cable device, might be the only downside to the Bolt OTA. Though certainly distinctive, and a genuine departure from the boring, black set-top box, it must be placed at the top of your device stack since nothing will be able to perch on its sloped contours. TiVo says the design is intended to make a statement, while also giving the always-on device much needed air circulation.

This design choice will be controversial, especially for those used to the Roamio’s more traditional shape, but everyone will agree that the inclusion of the remote locator function (previously reserved for the Pro version of the Roamio OTA) is a handy upgrade.

Clearly the biggest reason to buy the Bolt OTA is its and chops. But be warned: Support for these technologies varies by app. Plex, for instance, will happily stream content, but it currently ignores data. Plex says that updating its TiVo app for is on its radar but didn’t offer a time frame. Same thing goes for Netflix, and Amazon Video. If your TV doesn’t support , then this isn’t a deal-breaker, but if it does, you may want to wait until these apps have been updated. Unfortunately, TiVo isn’t being forthcoming on when these updates will arrive, instead simply telling Digital Trends that, “it is up to the app providers, not TiVo, to take advantage of this capability.” Well OK, then.

Despite the lack of support from streaming companies, when those streaming companies are ready, so will be the Bolt OTA. It supports both HDR10 – the most commonly used standard for streaming video – as well as HLG (Hybrid-Log Gamma), which is expected to one day become the standard used by broadcasters. While the Bolt OTA is currently only compatible with ATSC 1.0 – the digital OTA standard that maxes out at 1080p – TiVo is aware that the , HDR-ready ATSC 3.0 standard is around the corner (even if that corner is a few years away). The company claims to be evaluating an external ATSC 3.0 tuner that could be a hardware upgrade for BOLT customers by 2020. While we wish the format would have come standard, that’s a bridge we won’t likely be crossing for some time.

One thing we really like about the Bolt OTA is TiVo’s decision to give buyers more flexibility on its service subscription. The Roamio OTA only offered one level, an all-in option which was included in the unit’s $399 price. The Bolt OTA can be purchased for $250, and then you can choose from a monthly ($7), annual ($70), or All-in ($250) plan. Granted, the equivalent of the Roamio OTA option is now $100 more expensive, but you are getting a more capable DVR for the money.

If you’re a Roamio OTA owner, and you haven’t upgraded to a TV (or don’t plan to soon), stay put. You already have the same recording capacity (1TB, or 150 hours of HD) as the Bolt OTA, and all of the main features that make it attractive, like mobile streaming and ad-skipping.

If you own a Roamio OTA, and a TV, you may still want to hang tight. Remember, there’s no such thing as antenna content yet, so only your favorite streaming apps will benefit from this update. As amazing as looks, is the biggest reason for an upgrade, and none of the Bolt OTA’s streaming apps support it yet. Also keep in mind; your Roamio OTA All-In plan is also attached to the DVR, not your account, meaning it won’t transfer over to a new Bolt OTA.

If you have a TV, but haven’t yet cut the cord, the Bolt OTA is your best bet for doing so. You won’t find a smoother path to ditching your cable provider. The lack of support will be something of an annoyance until the streaming apps are updated, but you’ll likely find your TV already has versions of these apps that can see you through the waiting period.

Topics
Best 65-inch TV deals: Save on QLED and OLED for Super Bowl
The best wireless earbuds for 2023
The best outdoor TV antennas for 2023
Sony’s 2023 AV receivers are Sonos-ready and work with wireless speakers
The best anime on Netflix right now
Best new movies to stream on Netflix, Hulu, Prime Video, HBO, and more
The best Google TVs of 2023: from Sony, Hisense, and TCL
Best TV antennas of 2023 for local news, sports, and more
It’s still not cheap, but Samsung’s 120-inch 4K projector is $500 off today
The best kids movies on Disney+ right now
One of our favorite 65-inch OLED TVs is $400 off right now
Best Headphone Deals: Sony WH-1000XM5, Bose QuietComfort 45
You’ll be surprised how affordable this 75-inch QLED TV is