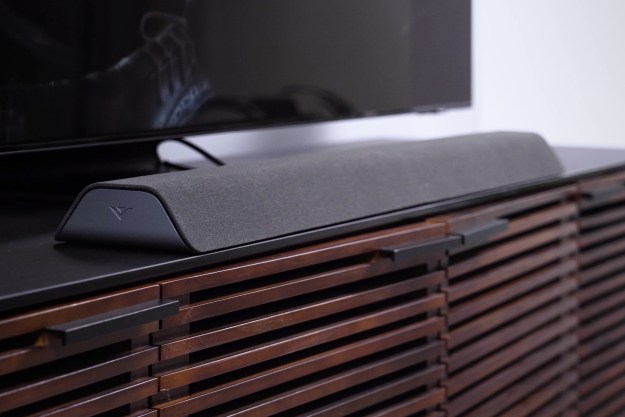 Time and again, Vizio has proved it is unmatched at making startlingly good soundbars at impressively low prices. The company’s new $180 M-Series All in One soundbar (model number: M213AD-K8 — this is extremely important) carries on this legacy. With potent bass, impressive dialogue clarity, and a surprisingly wide soundstage, there perhaps is no better all-in-one TV sound solution on the market.

No product is perfect, so we have a few complaints to register, but on the whole, the Vizio M-Series All in One soundbar (that’s its name, not just its description) exceeds nearly every expectation. Read on to find out if this all-in-wonder soundbar might be right for you.

This review applies to the 2022 M-Series All in One soundbar, model number M213AD-K8. We make that distinction because, at the time of publication, Vizio still sells an older version, the M21D-H8, at many popular retailers for under $150, and the two are easily confused. The new version reviewed here adds Dolby Atmos support, unique on-screen control integration with select Vizio TV models, and an updated remote control, and it produces better overall sound quality.

Definitely double-check the model before purchasing.

The M-Series AiO soundbar features six active speakers and two passive radiators. Depending on the soundbar’s orientation, the speakers will fire into the room in one of two different directions.

With the soundbar set on a media stand in front of the TV, two tweeters and two midrange drivers fire directly out at the listener — two subwoofers and two passive bass radiators fire upward from the top of the trapezoidal soundbar.

If the soundbar is mounted to the wall, the two subs and bass radiators will fire directly at the listener while the two tweeters and two midrange drivers fire at a slight up-angle. Vizio uses a built-in gyroscope and custom digital signal processing (DSP) to alter the output of the speakers so that no matter the orientation — on the wall is 90 degrees different than on a stand — the sound seems to come directly at the listener from the soundbar.

It’s worth noting that the Vizio M-Series AiO soundbar does not have up-firing Dolby Atmos speakers — although pictures of the soundbar’s subwoofers may lead onlookers to believe it does. In fact, Dolby Atmos sound effects are created virtually. In truth, this is a stereo soundbar.

The Vizio M-series AiO soundbar offers one HDMI input and one HDMI eARC port, which can send video and audio signals from the bar’s HDMI input along to a TV, as well as accept downstream audio from a TV’s ARC or eARC port. Because the soundbar supports eARC and claims to support Dolby Atmos, having a TV with an eARC port is preferred, but not required. Due to its low latency, eARC connections virtually eliminate lip-sync problems, and in some cases, eARC is capable of sending a higher-quality audio signal from eARC-enabled TVs.

With that said, the soundbar will work just fine using the long-standing ARC format found on most TVs from the past five years. If HDMI ARC is not an option, a digital optical or analog audio connection is also available, though using either of those connections negates most of the advantages afforded by this new model.

Setting up the Vizio AiO soundbar itself is a breeze.

The soundbar also supports Bluetooth wireless connections, for streaming audio directly from a smartphone, tablet, or computer, but does not support a Wi-Fi connection or built-in apps like Spotify Connect for streaming music. The soundbar is also not “smart” in that it doesn’t directly support Apple’s Siri, Google Assistant, or Amazon’s Alexa. However, smart speakers supporting those digital assistants can be connected to the soundbar via the aforementioned “smart speaker” port.

Setting up the Vizio AiO soundbar itself is a breeze.  One HDMI, optical, or analog cable is all that’s needed on the soundbar side. However, users will want to ensure that HDMI CEC and HDMI ARC or eARC are enabled in their TV’s audio menus. If an option for turning Dolby Atmos on or off is available, it should be turned on.

Before I get to my impressions of the Vizio M-Series AiO Soundbar, I wanted to explain what I listen for in a soundbar like this.

With the Dolby Atmos logo printed on the box, I’m naturally curious about how well the soundbar pulls off Dolby Atmos surround sound effects. But before I get there, I listen for general fidelity. Soundbars at this sub-$200 price level often offer poor overall sound quality. So if the soundbar comes off sounding good in general, that’s a great start. From there, I listen for dialogue clarity, because if you can’t hear the dialogue clearly, then you have failed as a soundbar. From there, I’ll scrutinize the bass output, because while this is a small soundbar, I expect some measure of “oomph” — otherwise I might be tempted to offer a soundbar with a subwoofer, cheap as it may be.

Then, last in the lineup of considerations, is Dolby Atmos performance. If it says Dolby Atmos on the box, I need to hear some kind of Atmos effect. Otherwise, I’m going to have to give the manufacturer a hard time for printing that logo on the box. Still, at $200, I’ll be tempering my expectations.

This soundbar pulls off some really impressive feats.

With all of that in mind, I gave the Vizio M-Series AiO Soundbar a thorough listen and the first thing that came to mind was, “OK, Vizio! I see what you’re doing!”

I’ll cut to the chase: This soundbar pulls off some really impressive feats for under $200. I can tell you without reservation that If I were to purchase the M-Series AiO, I’d feel like I got a whole lot more than what I paid for. Here’s what you’ll get and, just as importantly, what you won’t get:

You will get impressive fidelity. I’m not going to give this soundbar the full audiophile term-laden, surgical dissection treatment. But the fact that I could pick it apart at that level says a lot about how well the soundbar punches above its weight. Already, I’m impressed.

You will also get excellent dialogue clarity — and I mean excellent at any price. Every line of every movie and TV show I watched was delivered with superb articulation, diction, weight, and most importantly, intelligibility. Huge thumbs-up for this soundbar when it comes to its virtual center channel performance.

You will also get a respectably wide soundstage. There were times when I would have believed you if you told me the sound was coming from the Polk towers speakers that are placed well to the sides of the TV in my media setup. This soundbar has an impressive width of sound.

You’re also going to enjoy surprisingly good dynamics. There’s this scene early in Netflix’s The Gray Man in which the movie’s audio track does a hard cut from a really quiet scene to a surprisingly loud car horn honking as it drives by, and that moment made me jump in my seat a bit because it was so unexpected.

The Vizio M-Series AiO has got big bass. Shockingly deep bass, considering there’s no separate subwoofer. As in impress-your friends-with-the-big-bass-coming-from-the-small-box … bass. It far exceeded my expectations. But at times, it was a bit much. As much as I like moving bass, this soundbar definitely has a high mid-bass peak in its frequency response that makes it sound like it’s trying to sound bigger than it is. Fortunately, the included bass level control allowed me to dial the bass back enough to make me happy.

No need to run and grab a trashy subwoofer. No thanks.

The one not-so-complimentary thing I have to say about the Vizio M-Series AiO is that I don’t feel it delivers on even a baseline expectation of Dolby Atmos. I won’t use this review as a platform for expressing my dismay at the rampant dilution of the Dolby Atmos badge — that deserves its own article — but I will say that even my tempered expectations at hearing some sort of virtual height effects were let down.  It may surprise you to know, however, that this is fine with me.

I am actually happy that there wasn’t some distracting fake version of Dolby Atmos muddying up the overall sound signature. The soundbar sounds great without fake Dolby Atmos. I’m just worried printing it on the box sets up false expectations. Bottom line: so long as you don’t expect the “dome of surround sound” with which Dolby Atmos is most commonly associated, you will not be disappointed with this soundbar.

Vizio did it again. Even though I had a sneaking suspicion they’d deliver, I was still surprised when I reviewed this soundbar. Color me impressed.

The Vizio M-Series All in One Soundbar is a seriously impressive one-box sound solution that completely blows away any TV’s onboard sound quality while handily outperforming most competition found at and just above its price point.

Not really. The only standalone soundbar I’ve heard that can come close is the TCL Alto 8i, but the Vizio M-Series All in One Soundbar has better fidelity and more bass.

The next best option will be a 2.1 soundbar that includes a wireless subwoofer, and my pick in that type of product category would also be a Vizio product, the V21-H8.

Given the Vizio M-Series All in One is outfitted with an eARC port and that soundbars are generally not prone to aging poorly, this product should stand the test of time well.

Yes. If you’re looking for an affordable one-box solution for serious sound enhancement of your TV, this is the best option we’ve tested thus far.