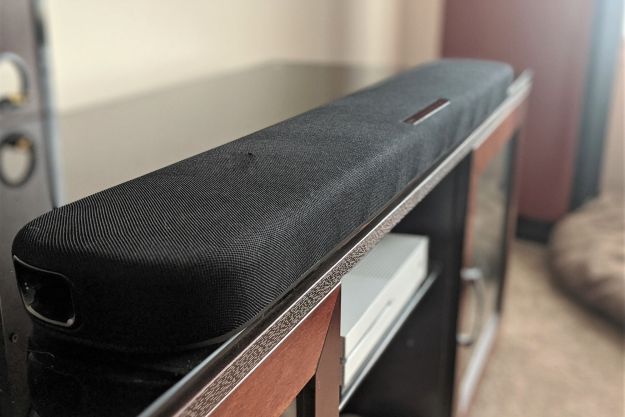 Yamaha’s new SR-B20A budget soundbar is a peculiar product offering. According to Yamaha, it’s a bar designed to build on the success of the cost-friendly YAS line — and in some ways, it does just that. The B20A has a refreshed, sleek design, and it maintains that coveted entry-level price.

But while it most closely resembles the older YAS-108, the $200 SR-B20A is priced similarly to the featured-packed YAS-109. With the older model still available, often at a cheaper price than the B20A, is it worth investing in the latest from Yamaha? Or is the company fighting a battle not only against its own product offerings but also against the entire budget soundbar landscape?

The design of the B20A didn’t change immensely from the YAS-108 or YAS-109, at least not in shape. In fact, the dimensions are nearly identical among the three, with the main difference being that the older YAS-109 weighs about half a pound more.

The B20A did soften the somewhat sharper edges of the YAS models, and it’s been wrapped in a more durable, eye-catching fabric. I liked it a lot. My significant other can vouch for my audible reaction to unboxing the B20A, and for the fact that I held the seemingly sparkling soundbar for a moment to admire it, in the same way the father in A Christmas Story proudly locked eyes on his prized lamp.

I held the seemingly sparkling soundbar for a moment to admire it, in the same way the father in A Christmas Story proudly locked eyes on his prized lamp.

Yamaha simplified the top panel of the soundbar, adding larger LEDs for better visibility. While I didn’t have a YAS soundbar in-house to compare the differences, I will say that it was easy to spot the indicators on the bar in a darkened living room, without the LEDs being obtrusive to the viewing experience.

The SR-B20A is still an all-in-one setup, following the lead of the YAS-108 and YAS-109 by excluding an external subwoofer. Yamaha said it has improved the design of the bar’s built-in woofers, of which there are two, but we’ll cross that bridge when we talk about sound quality. Beyond that, the SR-B20A features a simple-to-use remote — and offers a remote app — that’s largely unchanged from previous models.

Part of Yamaha’s marketing pitch with the B20A (and the more compact C20A) centers on the ability of the soundbar to effortlessly extend beyond the living room. The idea was to provide a soundbar that was easy to set up and use in a variety of applications, and I think they nailed the simplicity of the initial setup. The bar just needs power and a connection to an audio source, and while I do think every soundbar should come with an included HDMI cable at this point, the provided optical audio cable will do the trick for most situations.

After ridding the remote of its plastic pull tab that protects the battery, there isn’t much else left to do to get the B20A playback ready. One of the few perks of having a bar with no Wi-Fi connectivity is the ability to jump right into the experience without first connecting the soundbar to your internet and downloading a firmware update, and the B20A exemplifies that. It’s not necessarily a trade-off I would happily make, but for those who don’t need a connected soundbar, it takes away that extra hassle.

I know what the justification for this decision is, and honestly, there’s a part of me that understands it. The move falls in line with the “beyond the living room mantra,” as well as the streamlined simplicity — Yamaha wants to make it easy to plug and play regardless of where you’ll be using the B20A in the house. Theoretically, most people will only need that single HDMI ARC port to smoothly connect their TV and soundbar. I get that. I just can’t think of a situation off the top of my head where two distinct optical inputs would be more useful to the average person than two HDMIs. I’m sure there is one, but my guess is it’s rare.

Compounding this is the fact that, as I already noted, the B20A lacks Wi-Fi capability. I don’t think this is a must-have feature in $200 soundbars (yet), so I can’t be too harsh on the B20A for it. However, the YAS-109 features Wi-Fi, and is currently still available on Yamaha’s website, sometimes for a marked-down price of $180. When you add in the fact that the YAS-109 has Amazon Alexa built-in, you start to wonder what you gain by buying something newer for roughly the same cost.

When you add in the fact that the YAS-109 has Amazon Alexa built-in, you start to wonder what you gain by buying something newer for roughly the same cost.

To be as fair as I can to the B20A, it does support Bluetooth multipoint, and it has Amazon Alexa support via Bluetooth and a separate Echo speaker like a Dot (or in my case, a Flex). But while it’s useful and rather intuitive for a Bluetooth connection, problems can still arise. If the soundbar’s input is changed to HDMI, the Bluetooth connection between the Echo device is cut, and sound is reverted back to the Dot. As a result, the entire experience doesn’t beat having all of those capabilities already on board like they are with the YAS-109. Having previously spent an extended period with the Alexa-enabled Samsung HW-Q800T, I far preferred that built-in connection.

When we reviewed the YAS-109, we praised it as one of the “best-performing affordable soundbars when it comes to overall fidelity,” noting its smooth midrange, crisp high end, and effective bass response for a soundbar without a separate subwoofer.

Based on the time I’ve spent with the SR-B20A, I think this bar closely resembles that performance, at least when it comes to watching movies and TV. I was notably impressed with the low end this bar was able to produce without a true dedicated subwoofer. It’s not going to shake any picture frames or rattle any windows, but it complements the rest of the soundstage nicely. If you’re looking for a more pronounced low end, the bar does have a subwoofer output to allow for a powered woofer to enter the mix.

The remote’s four main listening modes all offered distinct sound profiles, though I gravitated toward movie mode for most of my content since it sounded the most natural to my ears. More notable were the bar’s Clear Voice and DTS Virtual:X technologies, both of which have dedicated buttons on the remote. Clear Voice was particularly helpful in amplifying lower-decibel dialogue like Tom Segura’s voice on the YMH podcast. Meanwhile, DTS Virtual:X expanded the soundstage, and added depth to some bone-crunching scenes when screening films like Brawl in Cell Block 99. It’s not the same experience as having physical surround sound and height channels, but I thought the sound processing had a positive overall impact on the content I watched, and I kept it on most of the time.

Music playback was a different experience for me. I don’t think it was bad, per se, but I do think the listening experience came off a bit hollow. Standard mode sounded more authentic than stereo from my perspective, but it didn’t help erase a generally less-than-impactful sound across multiple genres of music. Maybe it’s the lack of supported audio formats — the YAS-109 supports WAV, FLAC, and AAC formats, among others. Whatever the case, I enjoyed music significantly more with bars like the Polk Audio Signa S3 or the Vizio V Series, though it’s important to note that each costs about $50 more.

Yamaha’s SR-B20A may have tweaked its design, but ultimately retained the affordability and overall sound quality that made the YAS-109 a success. But with the older bar still around, and offering better features at a similar price, the B20A becomes something of a hard sell in this price range.

It’s no secret by now that I think the YAS-109, which retailed for $220 but can sometimes be found on Amazon or Yamaha’s website for $180, is a better value. If you’re OK with spending a few dollars more, the $250 Polk Audio Signa S3 is a better option for music, and the $250 Vizio V Series replaces Yamaha’s virtual surround experience with physical drivers.

All technology gets outdated at some point, but I don’t think basic connections like HDMI or optical audio are going anywhere soon. For a budget option, the B20A should hold onto its relatively versatile compatibility for some time.

Only if you’re set on getting the newest soundbar Yamaha has available. The SR-B20A sounds exceptional for movies and TV, and it looks pretty good too. But it’s not the value its older version was, especially when that version is still available.

Topics
The best soundbars 2023: which should you buy?
Best headphones for 2023: Sony, Sennheiser, Apple, and more
The best kids headphones of 2023: for fun, safety, and more
The best headphones for swimming in 2023
The best HDMI cables you can buy in 2023
The best speakers for 2023: great hi-fi options for music and more
The best Blu-ray players for 2023
Why the Nest Hub Max still rocks as a kitchen TV
Stream live sports without cable with Sling — now 50% off
OnePlus Buds Pro 2 to support Android’s new spatial audio feature
Should you mount your TV above a fireplace?
Walmart has a 50-inch TV deal for under $200 today
Disney Plus Free Trial: Can you watch for free in 2023?