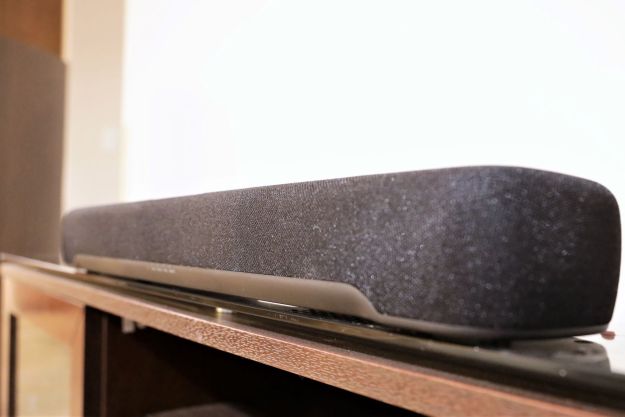 “The SR-C20A is the bar Yamaha wanted it to be, but it lacks low end sound.”

This year, we’ve seen many soundbars go big. The LG SN11RG was a cinematic behemoth, and the Samsung HW-Q800T was a large, powerful unit in its own right. However, a few select few bars went in the opposite direction, like the Panasonic SoundSlayer and the Zvox AV157. Those small bars are still asking full-size prices, with both retailing for $300.

Yamaha is breaking that mold with its $180 SR-C20A. Though the C20A is wider than those competing soundbars, it isn’t much taller and is significantly less expensive. The compact bar has been designed to provide big sound in the smallest of spaces, prompting Yamaha to tout it as the soundbar that goes beyond the living room.

The experts at Yamaha told me that while they were working on their latest line of soundbars, they sought out information from current Yamaha soundbar owners. According to Yamaha, they found many owners of these bars didn’t use them as part of a conventional theater setup in a living room. Instead, Yamaha bars were found all over the house, from the bedroom to the office, and often placed in tight spaces that were sometimes unsuitable for larger bars.

With that intel, Yamaha made the C20A, which measures just over 23 inches wide and roughly 2.5 inches tall, all while weighing in at a spritely 3.9 pounds. By comparison, the company’s SR-B20A is 35 inches long and 7.1 pounds, with the older YAS-109 posting similar dimensions.  That said, this isn’t the smallest bar around. Both the Panasonic SoundSlayer and the Zvox AV157 measure just 17 inches wide, with the latter of the two weighing in at just 2.8 pounds.

While the C20A may look petite and undersized with a 65-inch TV looming over it – or perhaps a 100-inch projector screen – its remarkably compact footprint gives the bar a lot of versatility as to where it can be utilized. With the bar getting the same sleek redesign as the bigger B20A, I’ve got to say I’m a fan of the way it is constructed.

With the bar getting the same sleek redesign as the bigger B20A, I’ve got to say I’m a fan of the way it is constructed.

Under the hood of the C20A, there’s a pair of drivers representing the front left and right channels, a built-in subwoofer driver, and a pair of passive radiators. The goal here, Yamaha told me, was to pack the biggest sound possible into the smallest possible bar. I’ll completely break it down later, but if you’re thinking there’s no way to build a soundbar this small without making audio concessions, you wouldn’t be wrong.

There’s no Wi-Fi to configure with the C20A, and no included wireless subwoofer to connect to. The device is extremely simple. It does have an included remote, plus an optical cable for tethering the bar to your display. As a result of that simplicity, there aren’t any hidden complications or snags to run into when setting it up. Most all-in-one bars feature this simplicity, so this isn’t anything new, but instantly improving your TV’s sound in less than five minutes is always a nice perk.

As a not-quite-crucial, but very helpful additional step of the setup process, I’d recommend downloading the Yamaha soundbar remote app. The physical remote works just fine, and the remote app doesn’t have any different functionality in general.  It does, however, have a volume slider that shows you exactly how loud your bar is. It’s also easier to determine when the soundbar’s ClearVoice and bass extension features are in use.

The C20A has an interesting array of connections. It only has one HDMI ARC port, and I have conflicting thoughts about that. Seeing as this bar was built to be compatible with several different setups, I can understand why it wasn’t given the extra ports that might be beneficial for a theater-focused soundbar.

At the same time, if part of the utility of this bar includes integrating into a gaming station like Yamaha suggests, then an extra HDMI port would be just as necessary, if not more so than if the C20A was mainly meant to sit in your living room. The Panasonic SoundSlayer, which unlike the Yamaha, outwardly designates itself as a gaming soundbar, has a corresponding HDMI input and output to better aid battle stations, though it does come with a $300 price tag.

In addition to the HDMI port, there are two digital optical inputs, an analog audio port, and a USB input meant strictly for firmware updates. Notably, the C20A is missing the subwoofer output that is included on Yamaha’s larger B20A, meaning you won’t have the opportunity to add a separate, powered sub and will be stuck with the output of the bar itself.

The B20A does feature Bluetooth multipoint, allowing you to connect to a pair of different devices at the same time.

The B20A does feature Bluetooth multi-point, allowing you to connect to a pair of devices at the same time. That could mean two different phones, for example, which would allow multiple members of the same household to play their own music. Or it could be your phone and an Amazon Alexa device, granting your Dot, Flex, or other Echo device the ability to broadcast through the far more powerful drivers in the C20A. I’ve gone on record saying I would prefer the built-in Alexa compatibility of the Yamaha YAS-109, but I don’t think Alexa over Bluetooth is a bad way to go.

To properly characterize the sound of the C20A, I would argue it’s vital to consider the environment for which it’s designed. It is not specifically built to be a home theater solution, as opposed to the DTS Virtual: X-enabled B20A. There’s no rule saying you can’t incorporate the C20A into your living room, and I imagine some folks will simply for its minimalist aesthetic. But throughout the press materials provided by the company, Yamaha isn’t shy about emphasizing that the C20A is a bar that can extend beyond the standard living space.

I actually agree with the marketing, and outside the living room is where I think the audio profile of the C20A makes the most sense. It produces a very clear sound and does exceptionally well with acoustic-leaning music. Basically, if a song didn’t need substantial bass as a backbone to sound like it should, I thoroughly enjoyed listening to the C20A.

I think it also does well in a smaller space, like a bedroom, where Yamaha’s ClearVoice tech can help you hear every clever line of New Girl, even at lower volumes. The company also markets the C20A as being small enough to slide under a monitor for improving gaming audio. The C20A’s gaming preset did provide a more immersive sense of sound during gameplay.

If a song didn’t need substantial bass as a backbone to sound like it should, I thoroughly enjoyed listening to the C20A.

In those applications – in a bedroom, as part of a gaming setup, or in a smaller space where you would like to hear more detailed music – I think the C20A excels.

It’s when you expect the C20A to effectively fill a living room, however, that the limitations of this bar reveal themselves.

The sound is still clear, to be fair, and it does get loud for the package it comes in. But as hard as Yamaha tried to pack bass into a confined space with passive radiators, the C20A just can’t fill out the low end of the frequency range enough to provide a great movie experience. Being the Marvel nut I am, I tried out the original Avengers (2012) with the C20A. The most demanding scenes, from Bruce Banner slamming his fists against a table to intimidate Natasha Romanoff (and the audience), to the epic Iron-Man versus Thor face-off in the woods, lacked the power that typically drives them.

The remote’s bass extension button does make a difference, but the C20A is too bass-deficient to completely correct things. That doesn’t mean I think less of this bar. It does effectively execute its mission of being smaller, and it sounds good in small rooms. But I can’t help but believe that it sits in a weird soundbar limbo. For a small soundbar, it’s significantly cheaper than the $300 Panasonic SoundSlayer or the $300 Zvox AV157. But each of those soundbars are built to achieve specific goals – the SoundSlayer has positioned itself as a gaming-specific solution, and Zvox designed its bar mainly for making dialogue easier to hear.

The C20A hasn’t picked a dedicated lane to stay in, and instead does several things well instead of doing one thing great. While that isn’t a bad way to go necessarily, it does mean the main aspect that distinguishes this soundbar from the better-sounding B20A is its size. Unless you absolutely need something this small, paying $20 extra for improved bass, DTS Virtual:X, and a subwoofer out seems like a logical route to take.

The SR-C20A is the soundbar Yamaha designed it to be – a compact bar that can fit into tons of different nooks and crevices in the modern home – and it should be commended for that. At the same time, it comes at the expense of the low end needed to be a compelling solution for movies, while having a cost and feature set that too closely mimics its more capable relative.

For $200, Yamaha’s SR-B20A is a better option for bigger rooms, though it doesn’t have the luxury of compact versatility on which the C20A prides itself. Outside of the brand, Vizio’s V Series 2.1 bar costs an identical $180 and comes with a wireless subwoofer that would almost certainly solve any low-end concerns you had about the C20A. If compact size and clear audio. along with better balance for music. is important to you, you’ll have to be willing to shell out $300 for the Zvox AV157, which is a considerable price hike.

The SR-C20A is light enough to toss around, but I wouldn’t suggest doing so. It does feel like a sturdy product, though, with connections that aren’t exactly state-of-the-art but don’t appear to be going anywhere soon.

That’s a tricky question to answer. If you need clear sound and strong vocals in a smaller space in your house, the C20A is a solid, somewhat expensive option. But if you’re hoping to pick up an all-in-one bar for movies and TV in your more cavernous living room, I’d spend the extra cash on the B20A.

Topics
The best Dolby Atmos soundbars for 2023
The best subwoofers you can buy in 2023
The best Blu-ray players for 2023
The best speakers for 2023: great hi-fi options for music and more
This massive OLED TV has a $1,000 price cut at Best Buy today
I replaced my kitchen TV with an Echo Show 15 — and I kinda liked it
The best HDMI cables you can buy in 2023
Why the Nest Hub Max still rocks as a kitchen TV
Stream live sports without cable with Sling — now 50% off
OnePlus Buds Pro 2 to support Android’s new spatial audio feature
Should you mount your TV above a fireplace?
Walmart has a 50-inch TV deal for under $200 today
Disney Plus Free Trial: Can you watch for free in 2023?