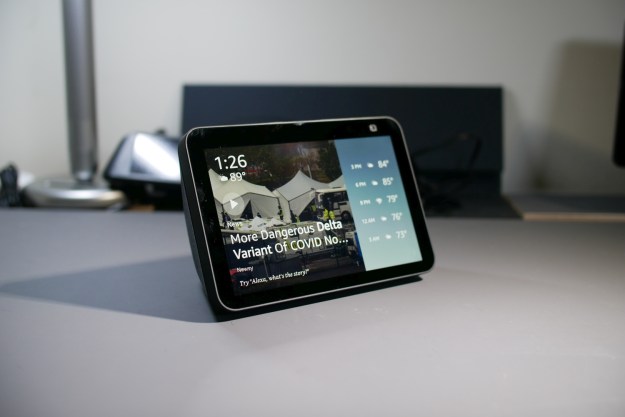 “The Amazon Echo Show 8 (2021) gives you the freedom to move around on video calls thanks to a new pan-and-zoom camera.”

Amazon certainly brought out its big guns with the release of the 3rd-generation Amazon Echo Show 10 earlier this spring in the form of a swiveling touchscreen that we haven’t seen before in a smart display. While there was an undeniable buzz around the 10-inch display, it doesn’t feel the same for its newest sibling, the Amazon Echo Show 8 (2021). You could say that its announcement was a bit more on the tepid side.

Still, it’s the follow-up to the one smart display that sold me on the power of Alexa in a smart display. Its predecessor managed to hit all the marks, making it the most versatile smart display in Amazon’s lineup, when I reviewed it in fall 2019. What’s interesting with this latest iteration, though, is the new camera that Amazon has crammed into it. The new 13-megapixel camera can be used to digitally pan and zoom during video calls, but seriously, there’s got to be more to it than just that.

I really enjoyed the original Echo Show 8 because it wasn’t too small or too big. In fact, you could say that its size was just right. Looking at the new Echo Show 8, you’d be hard-pressed to tell the difference between it and its predecessor because Amazon chose to recycle the design. From its 7.9-inch x 5.4-inch x 3.9-inch dimensions, to the same monitor slab design with fabric mesh wrapping, the Echo Show 8 (2021) is an exact facsimile of its predecessor.

By today’s standards, however, the design is as generic and boring as they come with smart displays. Compared to its closest rival, the Google Nest Hub (2nd Gen), it’s somewhat more bulky looking, although its size still makes it more suited for placing on tables, counters, and desks than its 10-inch sized sibling.

Amazon definitely took the easy route of recycling the design, which is a shame because I would have loved to see it trimmed down a little bit — while still accommodating the 8-inch display.

Display: Even more vibrant than before

I can instantly tell that Amazon has improved the display. Even though the resolution of  the 8-inch HD touchscreen remains at 1,280 x 800 pixels, the new adaptive color feature makes images look photorealistic in any lighting situation.

The result here is a display that automatically adjusts its color temperature, so that no matter what time of the day you look at it, or the ambient lighting conditions, the photos that scroll through appear true to life. Gone are the bleeding edges that I noticed with its predecessor’s display, replaced by an evenly lit screen that’s mesmerizing to look at. I’ll go as far to say that it’s a more attractive-looking display than that found on the Amazon Echo Show 10 (3rd Gen).

Don’t be so quick to dismiss this one based on appearance because it packs a punch in terms of sound performance. That’s not too much of a surprise given how its predecessor also impressed me with its thumping bass and power. Packaged with the same 2.0-inch neodymium speakers with a passive bass radiator, the new Echo Show 8 still proves it’s still a relevant speaker that fills rooms.

You get a sense that it favors audio in the lower range, evidenced by how the bass is so pronounced, but it’s not too overwhelming — especially if you tweak its settings for bass, midrange, and treble through the settings menu or Alexa app.

If you’re heavily intowatching videos on YouTube, the Amazon Echo Show 8 (2021) isn’t for you because there’s no dedicated function for it. Instead, it still opens up the web browser and points you to YouTube’s website. While you can still watch clips, the experience isn’t as intuitive as what you’d get with a Google Assistant smart display. But you really shouldn’t be too surprised because we’re dealing with an Alexa smart display.

Rather, the experience continues to center around the Amazon ecosystem. If you’re a Prime subscriber, you’ll reap all the rewards and benefits of being one with the Echo Show 8 (2021). From asking Alexa to stream music or video content, to receiving notifications whenever Amazon orders have been delivered, there’s no denying that it caters to everything Amazon.

Much like its siblings, it acts as a home hub for quick and easy smart home controls at the touch of a button or through voice via Alexa. Voice recognition is still accurate and superb, even when there’s some light background noise.

Camera: No need to stand still for video calls

Armed with a 13-megapixel camera, its standout feature, you no longer need to remain still or stationary in front of the Echo Show 8 (2021) while conducting video calls. That’s because it will now automatically pan and zoom to keep you in the frame. This is a feature we’ve seen in other smart displays, like Facebook Portal and Google Nest Hub Max, but it’s obviously a different implementation than what’s found in the Echo Show 10 (3rd Gen).

It works pretty well. Although, it’s best to not be too jerky or swift with movements, since the tracking moves at a moderate rate — enough so that it never feels erratic. It’s a nice addition during the work-from-home era, but hardly a defining feature among smart displays. You can use this digital pan-and-zoom feature on Alexa calls, but I do appreciate that it’s also supported on Zoom calls. It’ll be nice to see wider support for this on other video-chatting platforms, but time will tell.

If you’re worried about potential snoopers, there’s a switch that mutes the microphone and disables the camera. Beyond video calls, the camera is crucial in offering peace of mind when you’re not at home. I’ve always enjoyed using the Drop In feature that lets me instantly access the camera from my smartphone, which is perfect for checking out to see if the kids got home after school or if pets are snooping for snacks. Alexa Guard subscribers will also receive notifications whenever it detects unusual sounds — like glass breaking or smoke alarms going off.

Sometimes we have high expectations when it comes to successive devices. We often crave bigger, more elaborate features. The Amazon Echo Show 8 (2021) is an iterative gadget that makes only one meaningful improvement, to its camera’s functionality. Beyond that, it’s no different from what its predecessor offered.

Thankfully, the cost of the Amazon Echo Show 8 (2021) doesn’t change at $130. If you don’t crave the freedom of moving around during video calls, you’re better off saving the extra money and buying the $110 first-generation Amazon Echo Show 8.

If you need something smaller in size, the Amazon Echo Show 5 (2021) is the obvious choice. Conversely, if you want all the bells and whistles in an Alexa-powered smart display, the Echo Show 10 (3rd Gen) is the cream of the crop among Amazon’s smart displays — while also doubling as a versatile security camera. Now, if you’re a Google Assistant fan, the Google Nest Hub (2nd Gen) is the Echo Show 8’s direct rival because it’s similarly sized, but offers a unique sleep-tracking mode that you won’t find elsewhere with a smart display.

Even though it’s constructed out of plastic, it’s the rugged variety, which gives me confidence that it’ll hold up against minor accidents and bumps. Since it’ll remain stationary wherever it’s placed, it’s likely to remain operational for a long time. In the event of something internally going bad, there’s a one-year limited warranty that covers for defects.

Yes, if you really need that pan-and-zoom function with video calls. If not, stick with the original model because it’s functionally no different.