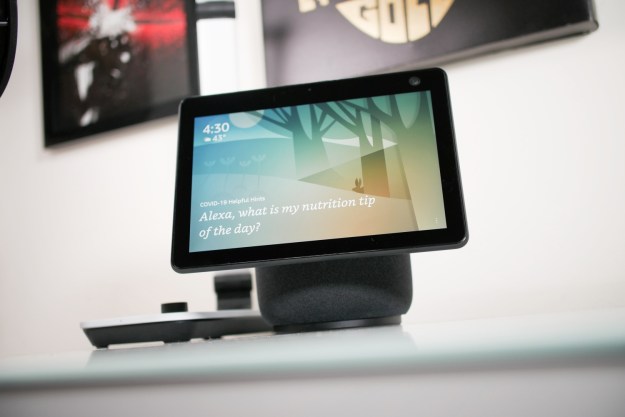 “It's not often you get such an encompassing experience in one product, but the Amazon Echo Show 10 delivers.”

After a couple of years in circulation, the second-generation Echo Show 10 is finally getting a proper successor, Amazon has announced. The timing is ripe considering that its last effort was the Echo Show 8, which we billed as perfection in terms of the lineup because it had that balance between size, performance, and price. In order to differentiate itself from past offerings, the Amazon Echo Show 10 (3rd Gen) is taking everything the company has learned about developing smart displays and packaging in new features that make it a more convergent gadget in the home.

The headline here is how the display is fixed onto a rotating base for better visibility wherever you roam. It’s something we haven’t seen before. Beyond that, it’s a more well-rounded package that features an excellent smart speaker and a potential all-in-one security system to keep your home protected when you’re not there. Now that’s something to be happy about!

Always in line of sight

As I’ve detailed already, the Amazon Echo Show 10 (3rd Gen) introduces a new feature we haven’t seen before in the series (or in a smart display, either) — a brushless motor that allows its 10.1-inch, 1280 x 800 touchscreen to pan and cover a full 360-degree range. I found this convenience helpful because there’s always proper line of sight to the display, making it perfect for those situations when I’m moving around and can’t physically be in front of the display.

I was skeptical about this new implementation, mainly because I didn’t know how it would perform. Thankfully, my concerns are quelled because it moves smoothly and quietly in practice, and is never jerky or jarring. For Alexa phone calls or dropping in, it gives me a bit more freedom when it’s placed in an open space. The tracking is a little problematic at distances over five feet, so I had to move it in closer for it to detect me again.

If you intend on putting it in a corner or a desk where it’s in close proximity to other stuff, you can adjust its panning threshold so that it doesn’t collide with them. I still found it a bit odd interacting with the touchscreen, just because tapping tends to wiggle the display a bit from its position. Since it’s not fixed, there’s always that slight wiggle, but at least the motor anticipates this and I never have that sense that I’m perhaps ruining its motor.

I can’t say that I’m in love with the new design. First of all, it’s by far the strangest design in a smart display I’ve seen — sort of a marriage between an Amazon Kindle Fire tablet and Echo Studio. The mash-up looks strange regardless, but it doesn’t help that the plastic casing of the display feels cheap. The speaker portion has a more modern look that matches its contemporaries with its mesh fabric cover, available in charcoal or glacier white. I prefer the darker tone of charcoal because it’s less susceptible to looking dirty over time.

Another area of contention for some will be the Amazon Echo Show 10’s size. I thought its predecessor was big, as is the Google Nest Hub Max, but the Echo Show 10 (3rd Gen) takes up an even larger footprint. Placed on my home office desk, its beefier size makes for a more cramped tabletop. However, it works nicely as a centerpiece on an uncluttered kitchen countertop or coffee table.

Back to the display: It’s sharp, bright, and offers excellent viewing angles — so the only complaint I have is that its contrast could be better. It can also tilt, but you have to do this manually. Unlike the panning function, the display’s tilt has been left as a manual process. This isn’t a deal breaker because of the camera’s wide field of view.

Securing your home when you’re not there

Speaking of its camera, the Amazon Echo Show 10 (3rd Gen) gains some much-needed security features thanks to its wide angle 13-megapixel camera. Part smart display, part smart speaker, this latest model can now also be classified as a security system. This is something I really appreciate because you have one device that encompasses all these things.

What about those who don’t want to subscribe? Well, you’ll be happy to know that you can access the camera in the Echo Show 10 at any time through the Alexa app. There are also controls in there to pan, so it’s a way to keep tabs on your own. Of course, privacy is kept in consideration via a switch on the display that covers the camera and effectively mutes it, too. Whenever the camera is accessed, a notification shows up on the display to inform you that the camera is active.

It’s the most complete Alexa-powered smart display to date.

All of this adds to the Echo Show 10’s arsenal, one that very much matches the capabilities of the Google Nest Hub Max. It’s more of a convergence device than ever before, making it an even more valuable part of the smart home.

The best speaker in a smart display

Not only are you getting one of the best smart displays around, but the Echo Show 10 is also a worthy speaker that puts other smart displays to shame. Armed with two 1-inch tweeters and a 3-inch woofer, there’s no hiding the fact that it’s an incredibly powerful speaker that can sufficiently fill rooms.

Listening to music or watching action-packed flicks are a joy because of its loud volume. Its audio range certainly favors the lower range, so you can expect superb feedback from its woofer whenever the beat drops or an explosion occurs. In terms of raw power, no other smart display can match its intensity — including the Google Nest Hub Max, which I would consider a distant second in this department now.

A command center of its own

Given how the Amazon Echo Show 10 (3rd Gen) extends its reach beyond just the basic functions of a smart display, it’s proving to be a command center on its own. With Alexa and responsive voice recognition, anyone can access and interact with the smart home solely through voice. Panning now makes it more convenient to say voice commands from anywhere in the room because it’ll automatically pan in the direction of the voice.

In terms of raw power, no other smart display can match its intensity.

On top of that, you’re still getting the same basic functions as its siblings, like being able to control smart lights, view the livestream of a security camera, and set up routines to make more processes streamlined.

Amazon takes the appropriate steps in making the Echo Show 10 (3rd Gen) a worthy successor that not only establishes itself as one of the premier smart displays on the market, but also one that replaces many other smart devices in the home. That in itself is a huge sell because for the $250 cost, you’re effectively gaining three fundamental smart home gadgets — a smart display, smart speaker, and security camera.

Even though I’m assured by the smoothness of the brushless motor, I’m still concerned about how it’ll hold up long term. There’s also the fear of it getting knocked from wherever it’s perched. Unlike other smart displays, there are moving parts here and attachments, so that’s a prime concern. There’s a one-year limited warranty included, and Amazon does offer extended warranties that cover against damages.

If the size of the Echo Show 10 is just too much for your taste, then consider the other smart displays in Amazon’s portfolio: The Echo Show 5 and Echo Show 8. The only other main rival to this is the Google Nest Hub Max, which has nearly the same functions and features, but is powered by Google Assistant.

You bet. It’s the most complete Alexa-powered smart display to date.