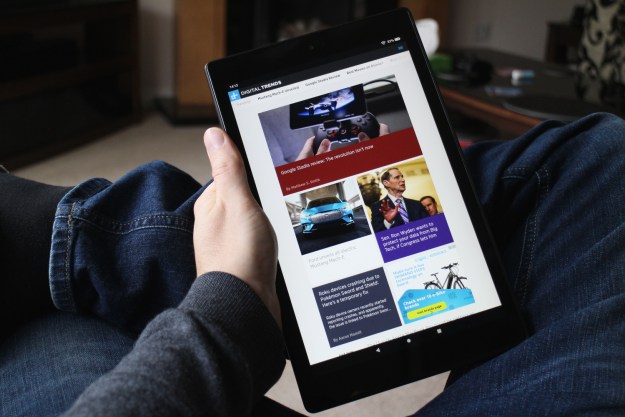 “The Amazon Fire HD 10 is the best value in tablets.”

If you want a tablet but don’t have hundreds of dollars to throw around, then it’s likely you’ve considered Amazon’s Fire devices. The Amazon Fire HD 10 is the biggest and best of its Fire tablet range. It doesn’t sound like quite as much of a bargain as the Fire HD 8 at $80 or the Fire 7 at $50, but a 10.1-inch screen for just $150 is quite noteworthy. Amazon has also made some welcome improvements over the 2017 model, including a bit more grunt under the hood — both in terms of processing power and battery life — and a switch to USB-C for faster, easier charging.

You can expect some compromises at this price, but the Fire HD 10 could be the ideal family tablet for those on a budget.

Slip the Fire HD 10 from its simple cardboard packaging and you’ll find a minimalist design that’s all about the 10.1-inch screen. The body is chunky plastic that curves into the glass front while the back bears Amazon’s logo and the camera lens at the top left. Large bezels around the screen make the tablet easier to handle, even if it does look a bit dated. The top bezel houses the front-facing camera.

Holding the tablet in portrait, the power button is at the top right with the USB-C port next to it. We’re glad to see Micro USB disappearing as USB-C cables are always right side up and they allow for faster charging. Moving further left along the top edge there’s a 3.5mm audio port and volume controls. On the right edge there’s only a flap that opens to reveal the MicroSD card slot.

The Fire HD 10’s stereo speakers are on the left side, or the bottom when you hold the tablet in landscape, as you will most likely do when gaming or watching a movie. This is something you have to watch out for, because the speakers are easy to block if you rest the tablet on something soft to watch a movie in bed. The Fire HD 10 Kids Edition comes with a thick case that solves this problem by redirecting sound to the front and it has a built in stand, too. A grown-up version of that case would actually be really handy.

The design is minimal in a cheap way; we’re talking plain plastic, rather than the metallic minimalism of higher-priced tablets, but the Fire HD 10 is built well enough that it feels sturdy. It’s comfortable to handle, but it’s a bit heavy to hold up for long periods, so a tablet stand is a good idea.

The 10.1-inch screen has a resolution of 1,920 x 1,200 pixels, which works out to 224 pixels-per-inch. That’s almost as sharp as Apple’s entry level iPad, which boasts 264 pixels-per-inch. The Fire HD 10’s screen can’t match the vivid color or brightness of Apple’s tablet, but it’s more than adequate to read, enjoy movies, or play games. Brightness was an issue in direct sunlight and the screen is annoyingly reflective, but tucked up in bed at night or sitting on the couch away from a window, it looks great. This isn’t just the biggest screen Amazon offers, it’s also the sharpest.

All Amazon, all the time

If you’re an Amazon Prime member ($119 annually or $13 per month) then the Fire HD 10 comes with a well-rounded package of content for you to enjoy. There are thousands of movies and TV shows in Prime Video, 2 million songs in Prime Music, more than a thousand magazines, comics, and ebooks — some with Audible narration — in Prime Reading, and thousands of apps and games in the Amazon app store. No other device really offers this much content out of the box without you having to put your hand in your pocket again.

Amazon also offers subscriptions to other channels and services; you can buy and download a host of movies, TV shows, books, and music not contained in its Prime offering. The Fire HD 10 is a simple window to a world of content, but without Prime membership its limitations come into sharp relief.

There is another big advantage to going with Amazon’s tablet, though, and that’s Alexa. If you like the idea of a smart speaker with a display like Amazon’s Echo Show, then you’ll be interested in Show Mode on the Fire HD 10. Swipe down on the notification shade and tick the Show Mode box, then prop your HD 10 on a stand and it will function just like an Echo Show. You can ask Alexa questions and issue commands to play content; the screen will stay on showing you relevant news and weather based on your location. Buying a simple stand can give your Fire HD 10 a whole new purpose and it’s a lot cheaper than buying a separate smart display.

I used it in Show Mode in the kitchen, which feels like the natural home for an Echo Show. It proved handy for playing music and TV shows while I cooked and cleaned, and if you plug into the wall, the always-on screen gives you weather and time at a glance. Plus, the kids enjoyed getting visual feedback for questions and song lyrics on-screen when they requested music. It can also do video calls, which is the only sensible reason you’d ever want to use the 2-megapixel front-facing camera on the Fire HD 10.

Fire OS runs the show on the Fire HD, which is using a version based on Android 9.0 Pie, but with Google apps stripped out. Amazon utilizes a straightforward carousel interface that divides content into tabs; you can take a look at books, videos, games, apps, music, and more. There’s also a Home tab with your most recently accessed content and basic apps like the Silk browser, a Maps app, and a Calculator. At the far left, a For You tab provides suggestions for things you might want to do next.

Dip into the settings and there’s no mistaking the Android heritage, but it does feel very bare bones. It’s like peering behind a movie set to find simple, unfinished wooden planks hammered together to hold up the facade. The interface can also be a little slow and laggy at times. If you were to switch to the Fire HD 10 from an iPad, for instance, the difference would be jarring. Fire OS lacks polish and it rarely feels slick.

There are also problems with the lack of choice in Amazon’s app store. I wanted to test the Fire HD 10 out with a challenging game, but you won’t find Call of Duty: Mobile or Shadowgun Legends here. I eventually settled for Asphalt 8: Airborne — Asphalt 9 has not made it into Amazon’s store yet — and I played some Minecraft. Occasional dropped frames and stutter aside, the Fire HD 10 has enough muscle to play games, but this is a weak spot compared to higher-end tablets like the iPad or Samsung’s Galaxy Tab S5e.

It’s possible to get Google’s Play Store on a Fire tablet, but it does require a bit of technological know-how. If you know you aren’t going to be content with Amazon’s ecosystem it may be better to buy a different tablet.

Amazon says the upgraded processor in the Fire HD 10 is 30% faster than the old one, though it’s backed by the same 2 GB RAM. If you’re switching from an older Fire tablet, you’re going to enjoy the improved performance. While things are noticeably faster, this tablet can still feel under-powered at times. Apps and games can be slow to load, there are pauses switching between them, and occasional lag can be expected here. The base model only offers 32GB of storage and the performance gets much worse when that space fills up, so you’ll want to add a MicroSD card.

If you’re primarily going to use your Fire HD 10 for movies, reading, and casual gaming then it’s going to be adequately fast for you.

I’m pleased Amazon managed to pack a bigger battery into the Fire HD 10. The company suggests you’ll get 12 hours of mixed use from a full battery and I think that’s fairly conservative. While gaming chews through battery quickly, movie streaming and reading doesn’t seem to. It’s the sort of device you’ll likely use in the home most of the time anyway, but it’s nice that it’s capable of easily seeing you through a long-haul flight.

Even better, we now have a USB-C port. The charging cable is much easier to plug and it charges faster. Amazon only gives you a 9-watt charger in the box, which takes around four hours to fully charge the Fire HD 10, but you can use a 15-watt charger with a USB-C to USB-C cable and charge it in three hours. There’s a reasonable chance you already have one of these if you’ve purchased a new phone recently; I was able to use my Pixel 4 charger for the better results.

The Amazon Fire HD 10 costs $150 direct from Amazon for the 32GB model with lock screen advertisements. Jumping up to 64GB adds $40 to the price, plus it costs $15 to get rid of the ads, which you can do at any time.

It comes with a standard one-year limited warranty that covers you for defects in materials and workmanship under ordinary use.

The Amazon Fire HD 10 is one of the best Android tablets you can buy. It’s a real bargain at $150 and it will prove irresistible for Prime members seeking a new slate with a large screen. There are inevitable compromises in a device at this price, but if you can live with the limitations it’s a compelling tablet.

A $150 tablet with a 10.1-inch screen is a bargain. If you can stretch a bit further, then there are similar-sized options from Lenovo and Huawei for around $200, but if $150 is your limit you won’t find anything better than the Fire HD 10.

There’s no doubt that the basic iPad is better in every way, but it starts at $329. The Samsung Galaxy Tab S5e is also a lot better than the Fire HD 10 by every measure, but it starts from $400.

Fire tablets aren’t really built to last, but if you get a protective case and keep it dry your Fire HD 10 could last you a couple of years. Amazon does push out software updates for a while, but I have found the need to factory reset my Fire tablets from time to time to gain back performance.