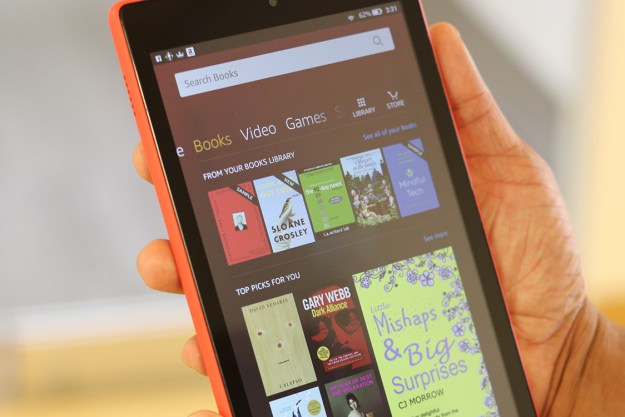 “The Amazon Fire HD 8 is the best budget tablet, but you should spend more to avoid frustration.”

With the exception of Apple and Huawei, tablet sales have been in a death spiral for years. As smartphone screens grow larger and unlimited data plans allow you to stream Netflix or Hulu anywhere, shelling out a lot of money for a slightly larger screen that’s usually beholden to a Wi-Fi connection doesn’t make much sense. Unless the tablet is hits a sweet spot in price. Amazon’s latest Fire HD 8 is a strong contender, being one of the cheapest on the market at $80. But there’s such a thing as too cheap.

The Fire HD 8 comes in four colors — Black, Canary Yellow, Marine Blue, and Punch Red — and that’s about the only notable part of its design. There’s nothing special here; it’s as basic as a tablet can get.

It’s an 8-inch screen on the front, and it’s surrounded by chunky bezels that help with holding the tablet. The back is constructed of plastic, and the only other flourish other than the Amazon branding is a  two-megapixel rear camera on the top left side. You’d expect the plastic body to feel cheap, but the Fire HD 8 is surprisingly durable. Its size makes it easy to hold in one hand, though you’ll want to use caution as the case is a bit slippery.

All the buttons on the Fire HD are at the top (in portrait orientation). The headphone jack and the volume rocker are on the left side, while you will find a power button and a Micro-USB charging port on the right side.There’s also a MicroSD slot here that can add another 400GB of external storage in case the built-in 16GB isn’t enough.

Considering the tablet is $80 this isn’t much of an issue, but we’d have really liked to see USB Type-C implemented here. Most Android phones have a Type-C charging port, and it would make things simpler if you didn’t need an extra charger.

The left side of the Fire HD 8 is home to stereo speakers that support Dolby Atmos. While they don’t pack a lot of bass and they can sound a little tinny, they’re sufficiently loud when the tablet is directly in front of you. It will hardly fill a quiet room, so don’t expect them to replace your Bluetooth speakers.

The Fire HD 8 maintains the same 1,280 x 800 resolution for its LCD screen. While Amazon bills the display as “crisp,” it’s anything but: Text on the home page looks fine, but you’ll notice pixels in many other scenarios, from the fuzzy text in books to low resolution movies in Prime Video. It also has poor viewing angles, so you’ll need to look at the tablet directly to be able to see everything clearly.

The colors aren’t punchy and are a little muted, but on a more positive note, the screen did get bright enough to see in direct sunlight outdoors. We should be clear though — it’s difficult to find another tablet in this price range, and if your budget is under $100, you’ll be satisfied with what you see here.

Performance can be frustrating, but battery life is great

The hardware in this year’s Fire HD 8 is nearly identical to the models Amazon released in 2017 and 2016. There’s a 1.3 GHz Mediatek quad-core processor, along with the same 1.5 GB of RAM. The base storage is still only 16GB, but there is a 32GB model as well (and a MicroSD card slot for up to 400GB more if needed).

We encountered a good deal of lag when using the Fire HD 8 for just about any and every task.

We encountered some amount of lag when using the Fire HD 8 for just about any and every task. From the Prime Video app to the Bookstore, every app takes some time to open. Third party apps are even worse: It took nearly five seconds for the New York Times app to open, and nearly as long for Hulu and a recommended Sudoku app to load. It’s not unbearable, but it can be frustrating when you just want to quickly get into an app to read or watch something. Even turning a page on a book wasn’t as fast as we’d like.

As for the battery, Amazon claims you’ll get 10 hours per charge. It’s a bit optimistic, but we had no problem getting six-and-a-half to seven hours when streaming Hulu and Netflix, with 15 percent battery life to spare. You can go for longer if you’re just using the tablet to read or browse the web. Once the battery is drained, it took six hours to get a full charge, which is a little ridiculous. Disappointingly, there’s no quick charging option.

It’s unlikely you’re buying a tablet for its camera, and if you are, you should know what to expect with an $80 piece of hardware. While both cameras on the Fire HD got a slight bump up to two-megapixels, photographs are still very low quality. The front two-megapixel camera is just okay for video calling, but that’s about it.

It’s 2018, but the latest version of Fire OS is still based on Android 5.1 Lollipop — a version of the Android operating system that was released in 2014. Amazon pushes out regular updates to its tablets, but the main issue is compatibility with newer third-party apps you may attempt to side load outside of Amazon’s App store. We often ran into the issue of trying to side load apps that weren’t compatible.

Other than the new For You tab that directs you to recently accessed media and apps, this year’s Fire OS update doesn’t look much different than previous versions. Fire OS is set up a bit differently than the typical Android operating system to which you may be accustomed. Instead of finding all of your apps on the home screen or in an app drawer, Fire OS is separated into different pages that primarily highlight different Amazon products or services. Some of the pages include Books, Video, Shop, Music, and Audible. It’s easy to use, but if you want to get the most from the Fire HD 8, you’ll want to be an Amazon Prime subscriber.

While you can download some third-party apps like Netflix and Hulu, your options are limited since it uses Amazon’s own app store instead of the Google Play Store. You won’t find apps like Google Maps or Tinder, and some “apps” like YouTube are simply bookmarks that lead you to web version.

Improved Amazon integration is a welcome and overdue feature on the Fire HD 8.

Improved Amazon integration is a welcome and overdue feature on the Fire HD 8. You can now trigger Alexa with your voice, and while the Fire HD 8 doesn’t have the same far-field microphones as Amazon’s Echo devices, it does a pretty good job picking up your voice from a few feet away. There’s also a new Show Mode that uses the tablet screen to provide useful information related to your Alexa queries. If you’re willing to shell out an extra $40, there’s a Show Mode Charging Dock that turns the Fire HD 8 into a makeshift Amazon Show while it charges.

Thinking of buying this Fire HD 8 to act as an Echo Show? We think you’re better off saving up. While the microphones can pick up your voice from a few feet away, Alexa isn’t as quick to respond, and everything in general feels much faster and smoother on the Echo Show.

Amazon’s Fire HD 8 starts at $80, and it’s now available for purchase through Amazon.

The tablet comes with a 90-day warranty that covers any defects in materials and workmanship. If you’re looking for a longer warranty, Amazon offers one, two, or three year warranties when you set up the Fire HD 8.

At $80, the Fire HD 8 is the best budget tablet on the market, but there are a lot of compromises. It’s slow, which can be frustrating, and that often makes us want to pull out our smartphone instead.

Yes and no. If you’re looking for a budget tablet, you’ll be hard pressed to find a better option than the Fire HD 8. If you’re willing to invest a little more, better options become available. If you want to stay within Amazon’s garden, consider the Fire HD 10. For $70 more, you get a beefier processor, a and higher resolution screen. If you want a more traditional Android tablet, check out the Huawei MediaPad M5, which has a good screen and strong speakers for $319.

For iOS or MacOS users, you may want to consider the 2018 iPad. While it costs $250 more than the Fire HD 8, it’s a better tablet all the way around. It has a much better display, a more powerful processor, a good camera, far more tablet-optimized apps, and it has Apple Pencil compatibility.

We think you’ll get one, maybe two, good years from the Fire HD 8. While durability is not an issue, performance may only get worse as time goes on.

No, unless you’re absolutely committed to spending less than $100 on a tablet. We recommend shelling just a little more cash for much better options.